I have been wanting to write about Dina Brodsky forever. But I'm glad it took me a while to get down to it, because in the meantime I read Walter Benjamin's 1936 essay "The Work of Art in the Age of Mechanical Reproduction." I know every other art enthusiast has already read it. What can I say? I'm slow. 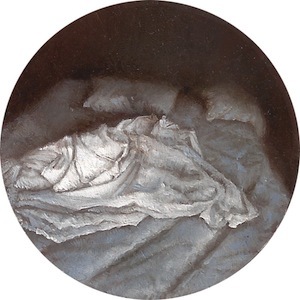 Brodsky has several favorite subjects, and she has developed her exploration of them to a high level of skill and atmosphere. My favorite of her subjects is the abandoned interior. As we see in "Insomnia," she works in the regions of unease (as in the crumpled sheets), and the uncannily subjective (as in the steep drop-off of light from foreground to background), and finally, outright menace (as in the looming dark of the wall). 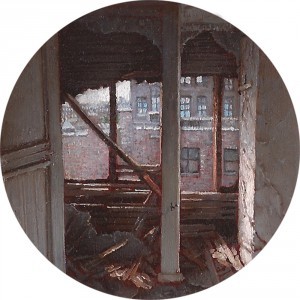 There is something of the interior spaces of Hammershøi to her work, but where Hammershøi mixed domestic comfort with faint anxiety, Brodsky catches that balance much farther on its way toward apocalypse: the comfort is gone, the anxiety is alarming, and the spaces themselves are undergoing collapse.

Venturing out from the ruins of the interior, Brodsky seeks and finds cities to match: 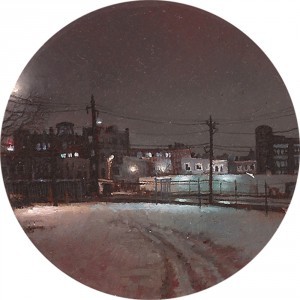 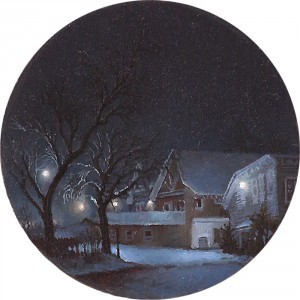 These paintings strike me as being paintings of after-the-fact, of missed opportunity. People were here: they did build these buildings. And they only left recently: the lights are still on. And yet now they are gone, and they are not coming back. No human voice will speak again.

This seems to me the theme of Brodsky's recent work. The overpowering and slightly unnatural sense of isolation is what I think makes it good. All of these pieces are on display in the show "Desert Places," through January 3rd in Somerville, Massachusetts, at the Mµseum, about which more below. 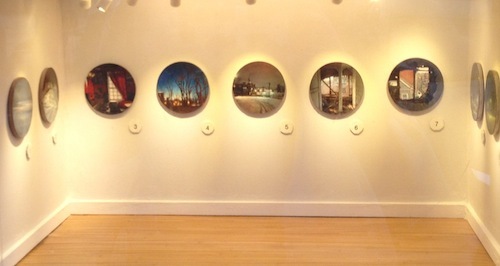 In "The Work of Art in the Age of Mechanical Reproduction," Benjamin performs some very interesting analysis of the impact of mechanical reproduction on certain qualities he sees in art, namely "authenticity" and "aura":

Even the most perfect reproduction of a work of art is lacking in one element: its presence in time and space, its unique existence at the place where it happens to be. ... The authenticity of a thing is the essence of all that is transmissible from its beginning, ranging from its substantive duration to its testimony to the history which it has experienced.

Against this force of authenticity, Benjamin sets mechanical reproduction:

He is, incidentally, describing here the classic drainage of the force of the Mona Lisa by the time you get around to visiting the Louvre. But what is the broader significance of the decline of aura?

The uniqueness of a work of art is inseparable from its being imbedded in the fabric of tradition. ... We know that the earliest art works originated in the service of a ritual - first the magical, then the religious kind. It is significant that the existence of the work of art with reference to its aura is never entirely separated from its ritual function. ... for the first time in world history, mechanical reproduction emancipates the work of art from its parasitical dependence on ritual.

Benjamin fleshes out a bifurcation of art itself:

Two polar types stand out: with one, the accent is on the cult value; with the other, on the exhibition value of the work. ... The elk portrayed by the man of the Stone Age on the walls of his cave was an instrument of magic. He did expose it to his fellow men, but in the main it was meant for the spirits. ... With the emancipation of the various art practices from ritual go increasing opportunities for the exhibition of their products. ... With the different methods of technical reproduction of a work of art, its fitness for exhibition increased to such an extent that the quantitative shift between its two poles turned into a qualitative transformation of its nature. ... To an ever greater degree the work of art reproduced becomes the work of art designed for reproducibility.

And finally we get to what makes Dina Brodsky's work so interesting. It is not reproducible, and it can scarcely be shown. The pictures of her work above are not so much misleading as simply untrue. Consider again the installation view at the oddly-named Mµseum:

Now let's zoom back to an uncropped view of the same installation: 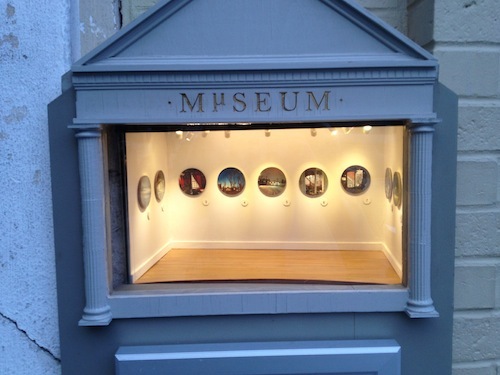 Wait - is that a dollhouse? Why yes, yes it is. The µ in Mµseum is mu, the Greek letter used by scientists for "micro-." Here's the opening of Brodsky's show, on October 19th: 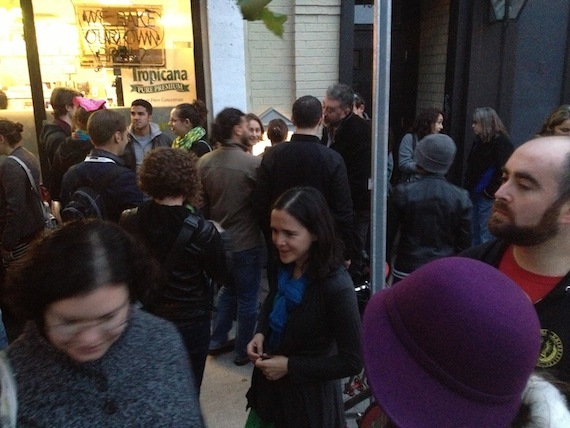 You can just about make out the entire Mµseum in the background, southeast of the Tropicana sign. It is a box nailed to a wall, its address given as "72½ Union Square, Somerville, MA (between the Subway and The Independent)."

It is no longer unusual to meet artists who paint as if it were 1640, or 1830, or 1900. These contemporary artists have mastered, and carry on, various extraordinarily difficult painting traditions as if the time since their original decline had not elapsed. Brodsky has innovated a different, more radical rejectionism. She rejects modernity not as a set of techniques, but as a concept. Her rejectionism is philosophical in nature, unseeable, categorical. Feeling out her way back to Benjamin's first pole of art, the cult value, she makes things which are perversely unshowable. "Perversely," you say? Well, call it integrity. She is not indifferent to galleries, money, and fame, and she's got them, a little. She could have more, but her integrity makes her care about other things. Her work is unknown virtually by design. And yet, almost everyone who knows her work is dazzled by it. Take a look at another one: 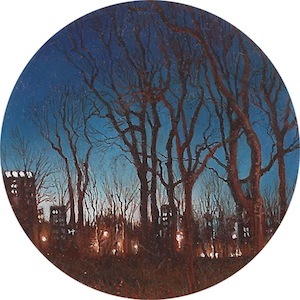 Hour of the Rabbit, oil on mylar

Like all the other pieces shown here, it is oil on mylar, and the mylar is a 2-inch circle. I suspect she gets her circles from Canal Plastics, one of my favorite stores in New York. What you're seeing here doesn't really convey the utterly bizarre impression her work makes, because it has a bulletproof aura: mechanical reproduction does not "depreciate" it, it simply bounces off of it.

What I mean by this is that the dazzlement her work produces is not a special effect. Its mere size and virtuosity do not produce its impression. And yet its size and virtuosity are fundamental to its impression. It is the combination of the size, the virtuosity, and the art that does it. These are full-fledged pieces of artwork, speaking to the human condition, and they would work at a more orthodox 36" diameter. At a 2" diameter, however, they cross over from the age of reproduction to the age of magic.

I do not think we need to think of this necessarily in terms of the cult. The tone with which Benjamin uses the term makes me suspect that his socialist materialism is causing him to deride spiritual things. And yet what he speaks of as the cult, is a concrete apparatus for addressing ongoing spiritual needs; we need them as much as did those men of the Stone Age. Elsewhere, Benjamin describes "the increasing formation of masses," and talks about artwork in reproduction as being well suited to the mass man. In this he is correct. But we still have those persistent spiritual needs, and one of them is solitude.

Non-reproducible art is necessarily a solitary experience. One cannot look at Brodsky's work on a computer screen in company of the Web, or even in a gallery with a crowd. One must approach it alone, and to see it clearly one must hold it in one's hand, like a little treasure, a jewel with a universe in it. This is a solitary approach to the work, and the work rewards it by reflecting that solitude back, by providing breathing space for the time alone.

The work is elitist in the ordinary sense that few people can own it, and in the unusual sense that few people can even see it, not properly. It admits of no posters, iPhone cases, or screen savers. It can scarcely fit in a book. Photographs make her dainty technique look clunky. Brodsky's gifts, in short, cannot be given to all. They are not mass gifts. But then again, probably most people do not want them.

I want them, though, and I want to tell you about them, because I hope you'll go seeking what I saw in them. You can visit Somerville and go by the Mµseum, surely a worthy junior sibling of Los Angeles's magnificently eccentric Museum of Jurassic Technology. If you are in New York, perhaps you can keep an eye out for shows Brodsky participates in here.

But if you cannot do these things, how wonderful and strange is it that we have here paintings that we cannot see, that we so compellingly cannot see that instead, we sit together and tell a story about them? This is the kind of cult they invoke; you and I are both lucky to be spending a little while inside their circle of magic.

All images courtesy of the Mµseum