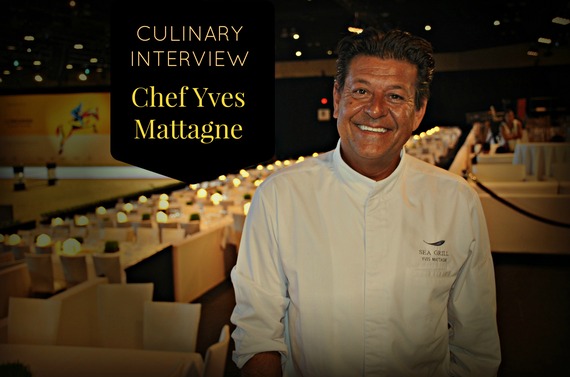 Chef Yves Mattagne sits casually on a white couch in the Masters Club lounge overlooking the dining tables that surround the equestrian ring. A native of Belgium, his charming accent and warm smile pour into his culinary vocabulary, as he explains how he prepares a cold gazpacho with warm lobster to serve 600 tables at the Longines Masters in Los Angeles this weekend. He uses this description to illustrate how he has mastered the art of serving his cuisine at the Longines Masters.

A celebrated Michelin chef, his flagship restaurant in Brussels, Sea Grill, is where his creativity comes alive. He serves the 'fruits of the sea' in their most natural state, using foraged pine tree bark to smoke fish a la minute, wild mushrooms for risotto (and for stuffing chicken), seaweed in water to infuse and bring out the natural flavors of seafood, allowing the freshness to come out.

To prepare the ringside dining menus, Chef Yves uses local ingredients sourced in Los Angeles for his mise en place, improvising and interchanging ingredients for the event. Each menu for the Longines Masters will be different for lunch during showtimes as well as the cocktail and gala dinners. For over five years with Longines Masters the chef has served his fine cuisine during the equestrian events (previously known as Gucci Masters in Hong Kong and Paris) and now in Los Angeles.

Cooking for this event takes serious planning. As he described a soup, I wondered how it is possible to keep the heat and temperature just right for each serving--- cold gazpacho with warm lobster in the center takes finesse. The ingredients are prepared in the kitchen then brought out on a cart to each table for service. The waiter serves the diners from the temperature gauged serving dishes. He chooses local produce and arranges the menus to appeal to a multicultural audience, with much more than seafood and a variety of dishes.

Chef Yves describes how he creates a dish at his main restaurant in Brussels by describing the fragrance of herbs, how he uses a small amount of butter to enhance flavor, a special pepper from Kazakhstan, and his own selected spices. As an example, he explains the process of making langoustines smoked on a hot stone a la minute, dousing the langoustine with a splash of whiskey, serving it with a creamy chestnut soup garnished with shaved white truffles. He prepares a white fish poached in seaweed-infused water for about ten minutes, allowing the sea salt and seaweed to bring out the freshness of the fish. He cooks scallops in tact inside of their shell by opening and cleaning out the shell first, keeping the scallops inside. He then puts seaweed inside the shell with some special pepper and sea salt, then cooks them in a steamer. The scallops are served at the dining table as the server places each scallop upon the diner's plate, scooping it out, freshly cooked within its shell.

"Keep all the flavor, all the natural things. I serve this kind of dish [scallops steamed within their shell] with soup of watercress, garnished with an emulsion of oyster and caviar. That's my way of cooking." Chef Yves Mattagne


The chef forages for his own ingredients, such as pine tree bark and morel mushrooms. He first poaches the bark to remove the spores and bacteria. Then he cleans the inside of bark and encloses fish within, steaming fish, such as sea bass, with pinecone-infused sea salt inside of the pine bark. The result is a flavor imparted to the fish that perfumes it with the essence of pine while keeping the natural flavors.

To Chef Mattagne, the prepared dish "must be beautiful and kept in its natural way." He emphasizes that "the food must be kept as it is, do not take away its natural taste, cook slowly to bring out the natural flavor, heat it so that it comes warm, do not cook quickly."

Chef Yves Mattagne will share his menus for the Longines Masters event in an upcoming post, along with a recipe to be featured from the menus.