A newly discovered bat-like dinosaur has given paleontologists a fascinating new puzzle to solve.

Fossils of the tiny dino, unearthed recently in China's Hebei Province, date back about 160 million years. And a new study of Yi qi, as the creature is known, suggests that the pigeon-sized prehistoric creature had featherless wings.

It's the only such dinosaur ever discovered.

"This is the most unexpected discovery I have ever made, even though I have found a few really bizarre dinosaurs in my career," Dr. Xing Xu, a paleontologist at Linyi University in China and a co-author of the study, told Live Science.

For the study, the researchers examined the fossils, piecing together the dinosaur's unique forelimbs. They discovered patches of membranous tissue preserved between the rod-like bones that extend from each wrist, which is evidence for the wings, the Associated Press reported. 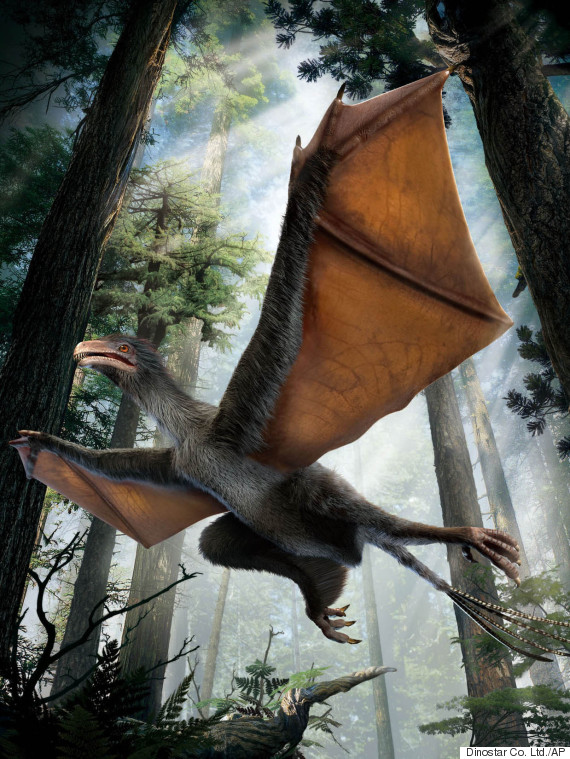 An illustration of the dinosaur, Yi qi, which is Mandarin for "strange wing."

But just because Yi qi may have had wings like a bat doesn't necessarily mean it flew like a bat. Some scientists think it did, but others argue that the dinosaur might have been more of a glider than a flapper. Some scientists aren't sure Yi qi flew at all, arguing that the membranous structures weren't wings but possibly embellishments displayed during courtship rituals.

"The temptation to associate these membranes with flight may be misleading," Dr. Thomas Holtz, Jr., a vertebrate paleontologist at the University of Maryland in College Park, who was not involved in the study, told Nature. “This is one of the strangest animals that I’ve seen in the fossil record in years... It’s raising a lot more puzzles than it’s solving."

The study was published online in the journal Nature on April 29, 2015.

How much do you know about dinosaurs? Check out the "Talk Nerdy To Me" video below for five other scientific findings that just may change the way you think about the prehistoric beasts.