The idea that a cosmic impact ended the age of dinosaurs in what is now Mexico now has fresh new support, researchers say.

The most recent and most familiar mass extinction is the one that finished the reign of the dinosaurs — the end-Cretaceous or Cretaceous-Tertiary extinction event, often known as K-T. The only survivors among the dinosaurs are the birds.

Currently, the main suspect behind this catastrophe is a cosmic impact from an asteroid or comet, an idea first proposed by physicist Luis Alvarez and his son geologist Walter Alvarez. Scientists later found that signs of this collision seemed evident near the town of Chicxulub (CHEEK-sheh-loob) in Mexico in the form of a gargantuan crater more than 110 miles (180 kilometers) wide. The explosion, likely caused by an object about 6 miles (10 km) across, would have released as much energy as 100 trillion tons of TNT, more than a billion times more than the atom bombs that destroyed Hiroshima and Nagasaki.

However, further work suggested the Chicxulub impact occurred either 300,000 years before or 180,000 years after the end-Cretaceous mass extinction. As such, researchers have explored other possibilities, including other impact sites, such as the controversial Shiva crater in India, or even massive volcanic eruptions, such as those creating the Deccan Flats in India. 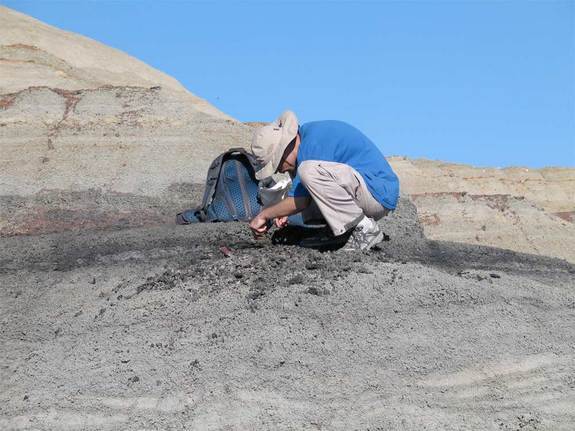 Timing of an impact

New findings using high-precision radiometric dating analysis of debris kicked up by the impact now suggest the K-T event and the Chicxulub collision happened no more than 33,000 years apart. In radiometric dating, scientists estimate the ages of samples based on the relative proportions of specific radioactive materials within them. [Wipe Out: History's Most Mysterious Mass Extinctions]

"We've shown the impact and the mass extinction coincided as much as one can possibly demonstrate with existing dating techniques," researcher Paul Renne, a geochronologist and director of the Berkeley Geochronology Center in California, told LiveScience.

"It's gratifying to see these results, for those of us who've been arguing a long time that there was an impact at the time of this mass extinction," geologist Walter Alvarez at the University of California at Berkeley, who did not participate in this study, told LiveScience. "This research is just a tour de force, a demonstration of really skillful geochronology to resolve time that well."

The fact the impact and mass extinction may have been virtually simultaneous in time supports the idea that the cosmic impact dealt the age of dinosaurs its deathblow.

"The impact was clearly the final straw that pushed Earth past the tipping point," Renne said. "We have shown that these events are synchronous to within a gnat's eyebrow, and therefore, the impact clearly played a major role in extinctions, but it probably wasn't just the impact." 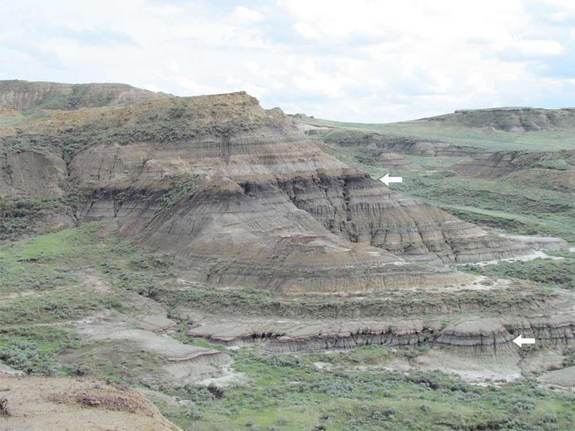 Rock layers near Jordan, Mont., exposing the level (lower arrow) where the dinosaurs and many other animals and plants went extinct. The arrows point to coal beds which contain thin volcanic ash layers that were dated.

The new extinction date is precise to within 11,000 years.

"When I got started in the field, the error bars on these events were plus or minus a million years," added paleontologist William Clemens at the University of California at Berkeley, who did not participate in this research. "It's an exciting time right now, a lot of which we can attribute to the work that Paul and his colleagues are doing in refining the precision of the time scale with which we work."

Although the cosmic impact and mass extinction coincided in time, Renne cautioned this does not mean the impact was the only cause of the die-offs. For instance, dramatic climate swings in the preceding million years, including long cold snaps in the general hothouse environment of the Cretaceous, probably brought many creatures to the brink of extinction. The volcanic eruptions behind the Deccan Traps might be one cause of these climate variations.

"These precursory phenomena made the global ecosystem much more sensitive to even relatively small triggers, so that what otherwise might have been a fairly minor effect shifted the ecosystem into a new state," Renne said.

The cosmic impact then proved the deathblow.

"What we really need to do is to understand better what was going on before the impact — what was the level of ecological stress that existed that allowed the impact to be the straw that broke the camel's back?" Renne said. "We also need better dates for the massive volcanism at the Deccan Flats to better understand when it first started and how fast it occurred."

The scientists detailed their findings in the Feb. 8 issue of the journal Science.