Stephen McCullah needed to raise $26,700 by May 11 in order to secure enough funds through Kickstarter.com to, well, kickstart his expedition to the Republic of Congo to hunt a reported living dinosaur.

When the deadline arrived, the 21-year-old adventurer and Missouri native had received pledges totaling nearly $29,000.

He's now packing his bags and a powerful tranquilizer rifle -- to bring down a possible dinosaur during what he has dubbed the Newmac Expedition. 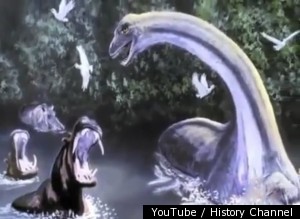 "I would be absolutely ecstatic if we even saw anything like one of those things," McCullah told The Huffington Post.

"It's been my passion for a long time and I definitely cannot wait to start looking. It would be a dream fulfilled if that happened," McCullah said. "Even if we just got a glimpse or footage of something like that, I would be very happy."

But really? A living specimen from the age when dinosaurs ruled the planet?

Most scientists will quickly say it's not possible -- that the dinosaur's reign as Earth's dominant species ended about 65 million years ago. A quick viewing of any of the "Jurassic Park" movies indicates this.

While science has taught us that dinosaurs and humans lived millions of years apart, that great historical record "The Flintstones" teaches us differently. 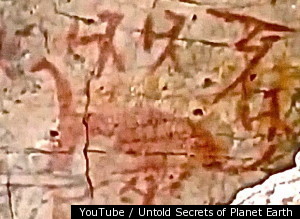 Cartoons aside, the notion of dinosaurs and humans living side-by-side is nothing new.

Earlier this month, researchers Vance Nelson and Harry Nibourg traveled to the Amazon rain forest to examine a 5,000-year-old pictograph. This rock wall painting, at right, depicts a group of nine people hunting and surrounding what appears to be a large sauropod dinosaur.

If dinosaurs went extinct 65 million years ago, what were these people hunting?

Watch as researchers investigate the wall painting of an Amazon hunt of a possible dinosaur.

For decades, reports by missionaries and other eyewitnesses in the Republic of Congo have claimed sightings of small, sauropods, long-necked four-legged dinosaurs resembling a brontosaurus and known locally as mokele-mbembe.

Many previous expeditions have attempted to follow up on these reports by tracking the dangerous, swampy Likouala region of Congo, which has a climate not much changed since dinosaurs roamed in large numbers millions of years ago.

McCullah and five other young men -- age 21 to 28 -- plan to head to Africa near the end of July with equipment supplied by numerous sponsors.

And they'll need some protection.

"We're trying to get gun permits," McCullah said. "It's a very tricky situation with firearms in a country like that. We'll take at least one crossbow for hunting purposes and also a tranquilizer rifle to bring down larger animals."

The Newmac team plans to land in Brazzaville, Congo's capital, "where we will meet up with our guide and translator, provided by the Saaiman hunting company," McCullah explained.

"After that, we have chartered a plane to take us north to the village of Impfondo," he said. "We'll get off there and hike roughly 46 miles to the remote village of Matoko. After getting more water and food, we'll pack up and trek another 20 miles through the Likouala swamp region."

McCullah said that his team will end up at the southern tip of Lake Tele, where mokele-mbembe have been reported. The Newmac explorers will set up camp at the village of a pygmy tribe.

For the remainder of their three-month stay, and as long as there are no health or safety issues intervening, the men will set out every day with a variety of special cameras, searching for new species, large or small, including canine-sized tarantulas.

HuffPost will keep a watchful eye on these Indiana Jones wannabes when they head for Africa with tons of insect repellent, antivenom and other medical supplies, maps, cameras and maybe a bullwhip or two.

UPDATE: 3 p.m. -- In an email to HuffPost, Stephen McCullah clarified that his aim is to capture the animal not to slay it: "Killing a creature like mokele-mbembe is really not an option as far as the team is concerned. If it were a life-threatening situation, that could change, but our plan for a confrontation with a mokele-like creature as of now is to chemically subdue the animal," he wrote.

"By the time we leave, every member will have been trained in chemical capture techniques with a CO2-fed tranquilizer rifle. We believe it would certainly be worthwhile to go to great lengths to bring in any animal with as small a population as a mokele-mbembe back alive."