Dinosaurs may not have been the slow, sunbathing reptiles researchers used to think. In fact, they may have been warm-blooded, new research suggests.

The researchers studied the "growth lines" on animal bones, which are similar to the growth rings in tree trunks. During slow-growing times like during the winter, they are darker and narrower, while in fast-growing times the bones have lighter, wider bands.

Figuring out if dinosaurs were warm-blooded endotherms (made their own body heat) or were "cold-blooded" ectotherms that relied on outside sources of warmth could illuminate a lot about how they lived, grew and evolved. How warm an animal is has an impact on its metabolism, and therefore how quickly they can grow and have babies.

Of bones and blood

Previously, scientists had thought that growth lines showed up only on the bones of cold-blooded animals, since these animals grow in fits and starts. Warm-blooded animals, like mammals and birds, are assumed to grow continuously, because they keep their temperatures up and have high metabolic rates, continually making energy to grow.

As such, researchers took the growth lines on dinosaur bones as evidence of their cold-bloodedness. Until now.

In this study, the researchers compared the bone lines from the leg bones of more than 100 wild ruminants (warm-blooded mammals like sheep and cows that have multiple stomachs) with seasonal rainfall and temperature cycles and with the animal's core body temperature and resting metabolic rate. The researchers showed that these warm-blooded animals also have bone growth lines indicating fast, yet interrupted yearly growth that depended on how long the "unfavorable" season lasted. [Image Gallery: Dinosaur Fossils] 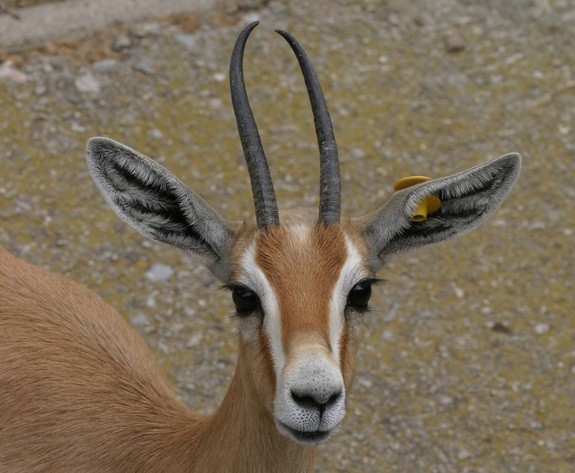 Researchers used the bones of ruminants, like this Gazella dorcas (a small, desert dwelling Gazelle from North Africa) to learn about the body temperature of dinosaurs.

The growth lines they found on the ruminants were similar to those seen in previous studies of dinosaur bones — indicating that both ruminants and dinosaurs have periods of high growth punctuated by "unfavorable" seasons with limited resources and little growth. This means that dinosaurs were likely warm-blooded like the ruminants.

"The argument we are giving in our paper, rather in favor of endothermy in dinosaurs, is that between the growth and rest lines, there's always a big region of highly vascularized [infiltrated with blood vessels] tissue that indicates very high growth rates," study researcher Meike Köhler, of the Autonomous University of Barcelona in Spain, told LiveScience. "This is typical in dinosaurs and very different from reptiles, which have slow growth between the rest lines."

Sauropods were the only dinosaurs where researchers haven't seen growth lines similar to those of ruminants. Previous studies of their teeth indicate they would have had high body temperatures as well, though they might have been big enough for their mass to generate that heat — what researchers call a "gigantotherm." Researchers don't know what their growth lines would have looked like, since no animals alive today are gigantotherms. 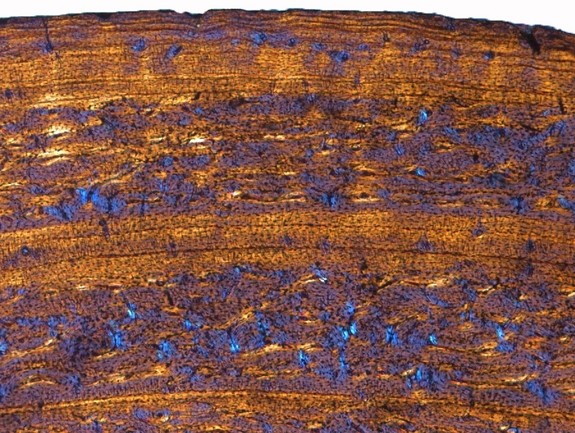 Two large, light and blood vessel ridden areas of bone growth are seen here in the bone of a 14-year-old Alpine red deer. They are intersperced with small, dark lines called rest lines.

This indicates that "dinosaursalso had very fast growth rates and needed to eat a lot and maintain high generation of heat internally," Kohler said, so they were most likely warm-blooded.

The theory that dinosaurs were warm has been gaining traction in the last few years in multiple fields, but the researchers admit that other, non-bone-based arguments for cold-bloodedness still stand. Endotherms should have the physical ability to move quickly, and lung volume to pump oxygen to muscles needed for running, which researchers can't be sure dinosaurs had.

"There are a lot of arguments in favor and against endothermy in dinosaurs," Kohler said. "It could be that they have some traits that are clearly endothermic," but others may be muddled.

The study was published today (June 27) in the journal Nature.