Is the debate over dinosaur "blood" finally over?

Generations of scientists previously believed -- and generations of schoolchildren were taught -- that dinosaurs were cold-blooded, like fish, amphibians, and reptiles. Then some scientists began to argue that dinosaurs were warm-blooded, like birds and mammals. Meanwhile, other researchers hypothesized that dinos were "mesotherms," not quite hot-blooded and not quite cold-blooded either.

But now a new paper -- essentially a reanalysis of a 2014 study putting forth the mesothermy theory -- argues that dinosaurs' metabolisms and growth rates were strikingly similar to those of modern-day mammals. In other words, they were warm-blooded after all.

"I was surprised to see how well dinosaurs fit within our concept of what it means to be a warm-blooded animal today," Dr. Michael D’Emic, a paleontologist at Stony Brook University in New York who wrote the paper, told The Huffington Post in an email. "Dinosaurs are a really diverse group of animals that lived over a very long period of time, so I expect that as we study more dinosaurs' growth, we will find more variability in how fast they grew and what their metabolism was like."

Not hot, not cold. The original mesothermy study, which D'Emic was not involved in, included an assessment of 21 dinosaur species -- such as Tyrannosaurs, long-necked Apatosaurus, duck-billed Tenontosaurus, and bird-like Troodon -- as well as a range of mammals, birds, bony fish, sharks, lizards, snakes, and crocodiles, Reuters reported.

The study suggested that the growth rates of dinosaurs' bones were not characteristic of either warm-blooded or cold-blooded animals, so the prehistoric creatures must have been mesotherms.

Sizing up bones. But D'Emic's reanalysis of the data showed that the 2014 study had underestimated growth rates for some of the dinosaurs. Growth rates are estimated from the so-called growth lines seen in fossilized dinosaur bones, which indicate the rate at which bone size increased during an animal's development, similar to "growth rings" found in tree trunks.

"Through the study of bones on a microscopic scale, we can learn a lot of detail about the biology of dinosaurs, including both how fast they grew and the sizes, shapes, and densities of some of their cells," D'Emic said in the email. 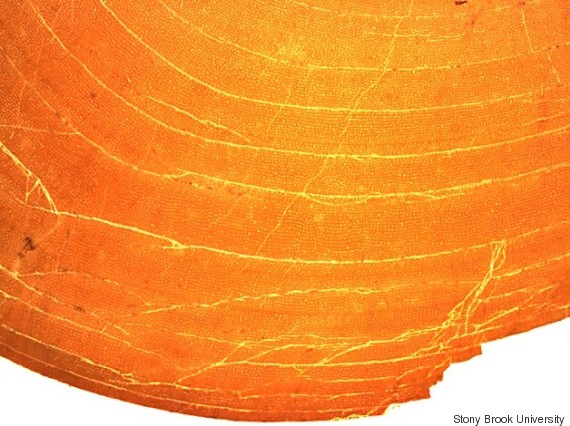 A microscopic image of the thigh bone (femur) of a dinosaur shows concentric rings. Like tree rings, they formed each year in the dinosaur’s bones during the season when resources were scarce.

Based on his reanalysis of the growth lines and the fact that modern birds (descendants of Mesozoic dinosaurs) are warm-blooded, D'Emic concluded that dinos were moreso metabolically similar to warm-blooded mammals -- which suggests that they must have been warm-blooded too.

Dr. Holly Woodward, an assistant professor of anatomy and vertebrate paleontology at Oklahoma State University, said in a written statement that the reanalysis is crucial to building a better understanding of the metabolism and development of dinosaurs.

“D’Emic’s study reveals how important access to the data behind published results is for hypothesis testing and advancing our understanding of dinosaur growth dynamics,” she said. 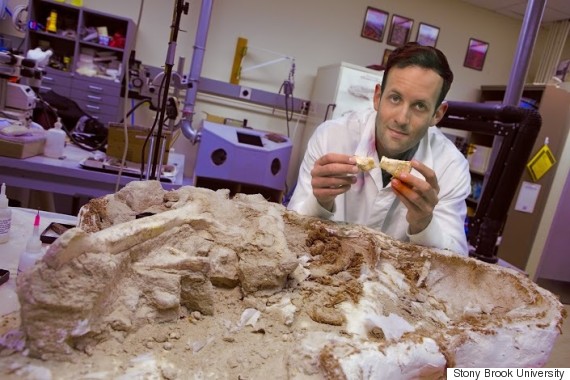 Debate finally settled? Does this mean the warm-blooded, cold-blooded conundrum is finally solved? Not quite. D'Emic told The Huffington Post that more research is needed.

"My next step will be to study additional dinosaur species in order to see if there is more variability within the group than is apparent from the data available right now," he said in the email.

How much do you know about dinosaurs? Check out the "Talk Nerdy To Me" episode below for five dino myths that you probably thought were true.