The "secrets" he is referring to are unclear in his interview with GQ for the magazine's February 2015 issue. The DJ was included in GQ's list of 19 Musicians That Matter. Diplo spoke about dissing Swift's booty back in November, and the subsequent smack-down from her best friend, Lorde. While he said the incident with Lorde was tongue-in-cheek, the response he got from the Swifties was a bit more intense.

"It sucks for me, because now I have to not be as crazy as I am on the Internet," he told GQ. "Which totally sucks, because it's not going to be fun anymore. But the repercussions are really bad. Like, Taylor Swift fans are really crazy. They threatened to murder me and stuff. It's really bizarre, and disgusting. They're the worst people in the world." 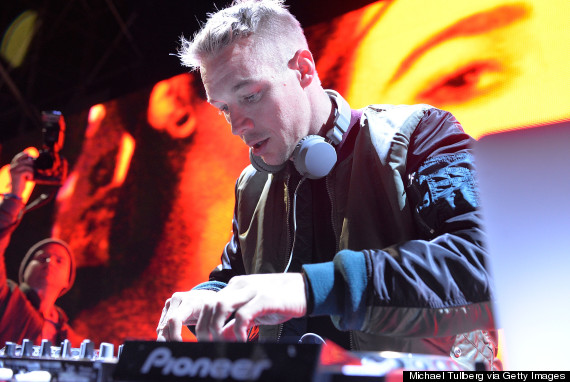 Diplo is an EDM DJ, music producer and songwriter.

"She has like 40 million Twitter fans," he continued. "Forty million! Yeah. It's crazy. I'm a fan though. Her powers -- she's big. She's strong, bro. Taylor Swift is very strategic with her friends and enemies. And I know lots of secrets. I can't divulge, but I know a lot of stuff about her. And she's definitely, there's definitely scary stuff going on. And I'm scared. I'm scared for my life."

Billboard noted that comments from Diplo about Swift that originally appeared in the article were removed and replaced by GQ, before the publication ran the producer's full interview. A rep for GQ told Billboard "the quote was removed because the full Diplo story provides context."

After Diplo tweeted about Swift in November, Us Weekly surmised his insult stemmed from a connection to Katy Perry. Swift allegedly wrote "Bad Blood" about issues with her.