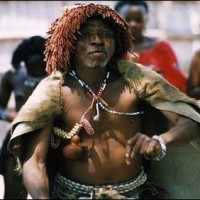 When stationed abroad, Foreign Service Officers may face dangers such as carjackings, bombings, or even assassination attempts. However, for some, the most serious threat may be a supernatural one: being cursed by a local witch doctor. The supernatural threats encountered by FSOs must always be taken seriously; otherwise, one risks temporal pain and spiritual punishment (probably even greater than dealing with HR).

While working in Kuala Lumpur as a Political Officer (1969-1973), John Helble was forced to seek help in performing an exorcism on his house when word came out that his home was cursed. Dorothy Kidder was lived in Rio de Janeiro from 1946-1949 when her husband was Ambassador to Brazil; while there her and her family was forced to deal with local witches cursing their home.

You can go here to read about Halloween in the Foreign Service. "I have made contact with the 'evil force,' and there is no question that it is a 'force'" John Helble, Political Officer, Kuala Lumpur, 1969-1973

HELBLE: The week after we moved into the new house the cook got sick. It seemed to be a bronchial complaint, with a little fever and so on. Ultimately, she decided that when she cleaned her room after we arrived in the new house, she had touched a little glass bowl that had some ashes in it. She concluded that those ashes were a talisman burned by a Malay servant of the previous residents of the house.

He allegedly gave her this talisman to burn, telling her that this would help her to stay in the house. Of course, this didn't have the desired effect, from her point of view. However, our Chinese cook felt that she had been contaminated by this, and it was causing her to be ill.

This situation went on for several weeks. I thought that it was all a joke. However, one day I came home, and Joan said, "They've left and they'll never come back, because this is a 'bad' place now."

I really bemoaned the loss of two extremely capable members of the household staff -- and particularly that marvelous cook. However, it seemed that there was nothing to be done about it. We offered them more money, but they said that that had nothing to do with it.

So we hired a replacement cook, and that cook also became sick within a week or so. We then had the water checked, we had various inspections made, but the second cook left us. A third cook was hired, lasted for three days or so, and left. Then we ran into what was really a dry hole. We couldn't find anybody who would work for us.

However, the other thing that I haven't mentioned is that we had an exorcism done by C. C. Too. He was the Director of Psychological Warfare Planning in the Ministry of Home Affairs. He had been trained by the British in the war against the Communist guerrillas.

He was a very clever fellow and was considered by most people to have extraordinary powers. When he heard the story of our problems at a dinner at the Ambassador's, he said, "I have to come over and do a 'job' on your house."

Well, I thought that it was a joke, but my wife said, "We're going to try it." So, on the next day, he visited our house and explained to Joan what he was going to do. Joan called me at the Embassy and said, "He's going to come over at 7:00 p.m. tonight. He said, 'Invite any friends that you want, and they can witness this.'"

So we lined up a dozen friends, all on the spur of the moment, all of whom knew about the problem. They came over. C. C. Too explained to the group that he was convinced that this involved an evil force -not a ghost, but an "evil force." 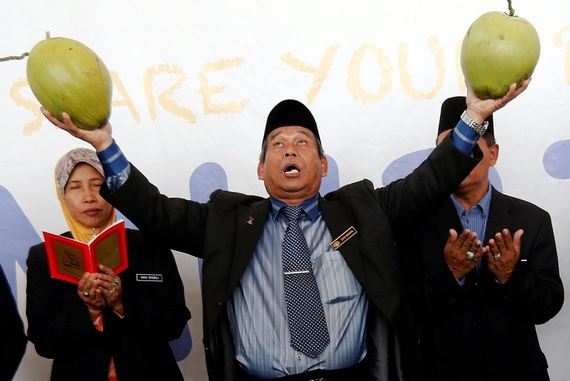 The question was whether C. C. Too's powers were greater than the powers of the bomoh, the Malay witch doctor who had brought the evil force into the house. So he went into what I can only describe as a period of deep concentration -- not quite a trance. He told us that we could keep talking, so we sat there on our verandah. (Bomoh in 2014)

After about 45 minutes he said, "I have made contact with the 'evil force,' and there is no question that it is a 'force.' It is not a ghost. Now I have to demonstrate to the 'force' that I have greater powers than he who controls the 'force.' I have to repel him." So he went on in this way.

A little after 9:00 p.m. he said that he had succeeded in repelling the 'force' from the house. It was no longer there. He could not be certain how long it would stay away. It could return. It might be in three days, three months, or maybe it would never return. He said that he couldn't tell that.

However, if it returned, we should contact him, and he would come right back. At this point we had two young women who had just started working for us as domestic servants two days before. They were going to leave us that day, when Joan convinced them that we have a very strong man coming to take care of this problem. They decided to wait.

They watched the whole ceremony from a distance, a few feet away from the kitchen door. After it was over, he went over to them and explained to them what he had done and said that everything was all right.

Then he went next door to the companion house, where another American officer lived, got their servants out of their quarters, explained to them what had happened, and said that this house was now free of the evil force.

"You HAVE to have the place exorcized or you have to have some SEMBLANCE of exorcism" Dorothy Kidder, Foreign Service spouse, Rio de Janeiro, 1946-1949 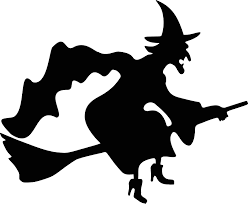 KIDDER: I came to Belèm with the children about nine months later than Randy [Ambassador Randolph Kidder], who'd already been installed, because it was very hard to determine that we were going to do this thing in that we had so many conflicting reactions and advice in Washington.

"What? You're taking children to the Amazon? Why, it's infanticide." "What? You're not taking your children? Why, you're cowardly." Back and forth it went. Finally we just decided we'd go and try it out for three months.

I get there. I didn't get along with Randy's cook, whose name was Ydalhia. I made the mistake of firing her. Also I made the mistake of going out right afterwards, not realizing that after I had gone, imprecations by Ydalhia were made throughout the house -- that she was going to put a "hex" on it, that we would know that Ydalhia was working against us.

And, strangely enough, before long it began to happen.

I knew nothing of it; nobody said anything to me about Ydalhia's imprecations. And [my daughter] Charlotte became sickly, but really quite sickly, and feverish. Nobody could diagnose this strange fever the child had.

Then the door burst open and up the drive, came this woman, Indian, with a kind of insolent evil; you could just feel it in the walk. She clapped her hands, which as you recall was the way to ask for entrance; she did.

Then I heard the little maid downstairs calling up "Dona Ruth, Dona Ruth" quietly so as not to disturb Charlotte and me. And Dona Ruth went downstairs, then she came up in a few minutes, looking very drawn.

"That woman," she said, "was applying for the position of cook." And while I was talking to her, it was very strange. Herminia, who was the laundress, came from the laundry. She stood at the back window. And Teresa, the little maid, didn't leave the door leading into the room where I was sitting, talking to this woman.

And just as she said that, we heard Pedro, the garden boy who'd opened the garden door, who never spoke, calling with great anxiety in his voice, "Dona Ruth, Dona Ruth!"

Meanwhile, I had seen this woman leave. Dona Ruth came downstairs, then came back up in a minute, and she said, "You know, this is it, it's really very serious."

"Ahhh," said Pedro, "she is such bad news. She comes from the island of Marajó and she is a witch. And she is sent by Ydalhia, who fears that the imprecations are going too slowly, and she was to enter our service and accelerate them."

Dona Ruth came to me and said to me, "You know, Mrs. Kidder, you are going to have the place exorcized. Because if you don't, everything is going to wither around you. The rest of the staff will leave, and nobody will serve you in the market, and you will just be a pariah."

I said, "Well, Dona Ruth, I can't do that. As you know, the authorities don't recognize Black Magic. How can we go along with it?"

She said, "Well, I don't know what to do but I suggest that you call Mrs. McCray."

Mrs. McCray, a wonderful lady, Nora McCray, was the wife of a British official who was the director of a streetcar network...

So I went downstairs -- I can remember trying to remove my hand from Charlotte's very hot little hand -- and going down the stairs to the telephone, which was on the wall. I woke Norma McCray from a siesta -- a thing you never did -- and told her what had happened.

She said, "Yes, Dottie, this is very, very serious. You HAVE to have the place exorcised or you have to have some SEMBLANCE of exorcism. Something has to happen." 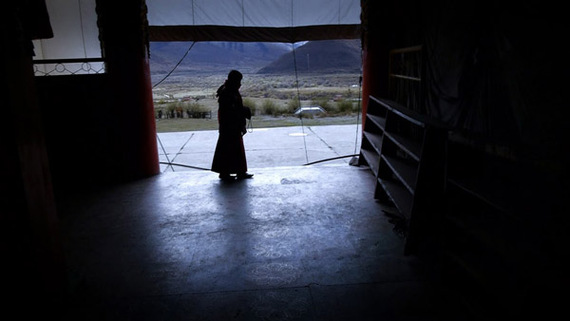 Our property backed up on the property of a monastery, and the monks had very much hoped to entice [my son] Mike to be one of their pupils in a sort of daycare thing they ran.

And it suddenly occurred to me, "This is our one chance -- that Mike could invite them to come see our animals -- we did have some chickens, a turtle tank, a few rabbits, and probably enough to interest the monks anyway from the curiosity of wanting to see how we lived.

So that was planned for a certain Sunday, late Sunday morning. And I kept all the staff in. We put up the ladder and we ceremoniously invited them over. We arranged with Mike how they would walk by the pen where the rabbits were, and the pen with the chickens, and by the turtle tank and underneath the avocado tree and right through the center of the house, then back into the barn where our "schoolhouse" was. There they would be offered a collation [light meal].

I had my heart in my mouth as I watched them go back up the ladder, over the wall, down the other side. At which moment Mike waving, we all waving, saying goodbye and the staff standing around looking pretty impressed.

There was no holy water scattered, there were no prayers made; just this presence. And then we let the staff out.

And the next day we had a very nice person present herself as cook. Charlotte's fever receded.