I regularly look at product labels because that is part of my job. So when I come across a label that says Direct Trade, or even "Direct Trade Certified," I have to wonder why a brand would compel themselves to create something for consumers in order to differentiate themselves that really doesn't mean much. As someone that has worked in the fair trade movement for 15 years, I always dig deeper into those claims to see what they really mean.

Many brands are frustrated by fair trade certification, and let me be very clear, it is certification, not fair trade they are frustrated with. There is a social movement to change the way we trade globally, allowing small-scale producers to participate and thrive, and to provide social services locally in impoverished producer communities that are not provided by local or federal governments. That social movement is called fair trade and it is alive and strong. It is fair trade certification that is broken. Fair trade is more than a logo or a brand, it is a movement to strengthen communities. 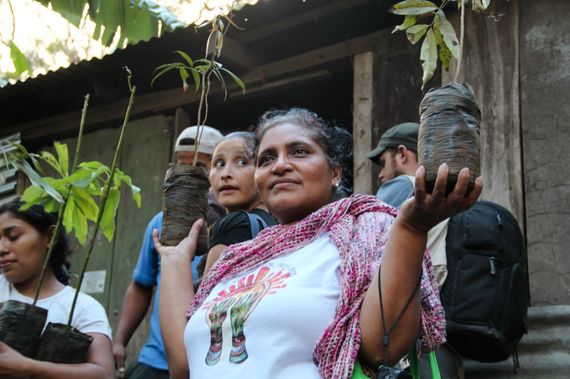 In many ways, the differences are captured in the name and can be summarized this way. Direct trade roasters want to focus on the relationship between the roaster and the producer with an emphasis on price and quality. They may be interested in eliminating exploitation in their supply chains, but they essentially mimic conventional traders who also do not worry about externalized costs or consequences of their transaction on the broader community or system. The direct trade differentiation is just in the higher price, "better" quality, and shortened supply chain.

Authentic fair traders want to change the structures of trade to make it more fair for everyone and they achieve this by working with organized producer communities. In these communities families are owners of a structure (for example a co-op) that allows them to take advantage of economies of scale, helps them gain access to capital and the market and helps them build infrastructure to allow them to scale their capacity and improve quality of what they are producing and how they are producing it. By organizing, they are able to work on policy change and community development as well, important components of really transforming our social structures that currently benefit the 1% and keep increasing numbers in poverty.

A look at some specific claims associated with fair and direct trade makes the similarities and differences between direct and fair trade even clearer. (Click the image to enlarge.) 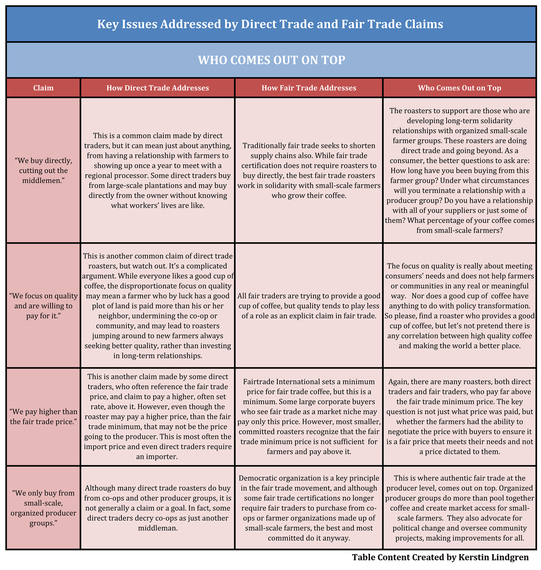 In summary, the short story is that to buy the most "ethical" or "best" coffee, you need to look at what the roaster is doing, not whether it is direct trade or fair trade. But if you want transformation, get involved with the fair trade movement.

As author Raj Patel recently said in an interview, "If you look at every systemic and major change that happened in the world, it's never happened through shopping. It's happened through transformation, organisation and protest. The sooner we learn that, the sooner we move beyond not doing the bad thing to a world where we are doing the right thing."

Fair trade is a movement that seeks systematic transformation and a new way of trade. Organized producers play that role of organizer, protester, and transformer, which is why it is important to support and engage farmer organizations in addition to paying a fair price to farmers. One great example is LaFem, pictured here. LaFem is an umbrella co-op that has magnified the needs of women's voices in the mountainous region of Nicaragua where they work. Their program work includes empowering women, combating domestic violence and helping families build sustainable housing structures, and addressing the effects of climate change on coffee yields, in addition to facilitating coffee sales on fair trade terms.

Any number of roasters may pay a decent price for coffee, visit a farm, or offer a good cup. But no matter how much direct trade coffee you buy, or fair trade coffee for that matter, we won't transform the current system that puts corporate profits first and marginalizes small-scale farmers until we become politically engaged and start supporting the democratic organizations that advocate and agitate for change from the grassroots up. Direct trade as a market claim doesn't mean much until it has this kind of movement behind it too.