Director Amma Asante's follow-up to "Belle" is another historical romance with political overtones, based on a real-life story. But "A United Kingdom," with Rosamund Pike and David Oyelowo as a couple whose marriage created an international diplomatic crisis in the late 1940's, also includes another theme Asante says she hopes to have in all her films. "I don't know than I can ever do a story that doesn't involve sisterhood," she said in an interview. "Don't hold me to that. There might be some true life story that comes along that doesn't have that, but to me it was very, very important, the power of the women." Both "Belle" and "A United Kingdom" feature women who are strong and fearless and who will not be limited by the constraints their societies want to place them under due to race and gender.

Oyelowo plays Seretse Khama, an African prince who studied law in London after WWII, and fell in love with Ruth (Pike), a British secretary. Their marriage infuriated both families. The British government, which had extensive political and economic interests in Africa, supported exile for Khama. But love, courage, and integrity triumphed, and Khama became the country's first elected president.

Asante, born in London to Ghanaian immigrant parents, has a deep understanding of the experience of those with connections to two worlds. It was important to her to portray the Africans and as "just normal," not like the exotic "other" we often see on screen. The dignity and respect throughout the community is palpable. The Ugandan locations also offered significant advantages for a story set half a century ago. "I mean the beauty of shooting in Botswana is that you can find large areas where you have 360 degree access. You can spin that camera around. The reality of shooting in Europe or any sort of built-up cities is that you have this triangle and that corner and you have that building and no matter what you do unless you're going to paint the whole thing into CGI, you are restricted in terms of giving the movie scope and scale." 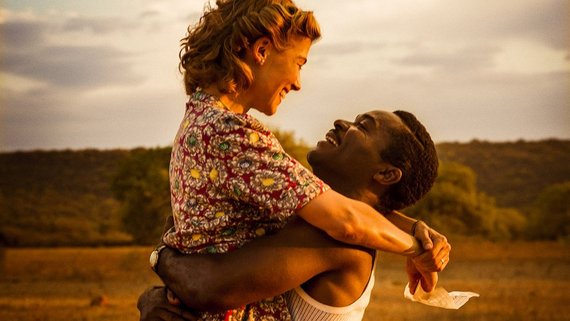 Even the characters who are opposed to Seretse and Ruth are portrayed with some sympathy. She described the dilemma of the British official who tries to stop the marriage: "He's holding onto a world that is changing. He is holding onto a world that is in transition. India as just gotten its independence, many of them after World War II the foundations are shaking of the British Empire and these men, their history is entwined, their identity, their sense of identity is entwined in this idea of the empire." He, too, is between two worlds. It is just that unlike Ruth and Seretse, he wants to keep out everything that is not familiar to him.

The difference is illustrated in one of the film's most powerful scenes, Ruth has just given birth to her first child and they are in a hospital bed together, while the African women sit in a circle together, holding their newborns. Ruth gets out of the bed and silently joins them.

"That scene was created after I came on board. I was exploring the concept of Seretse as an outsider who was an African man in the UK but I was also obviously exploring the parallel which is a white woman in Africa who was the outsider. We see through Ruth's eyes as an outsider, looking at her new world. Once she surrenders to that, that's when you start to see similarities. She was a postwar woman, very different to a prewar woman. She had experienced life without men. Once men were taken out of the equation woman had opportunity, they were able to do work that previously had been closed off to them. And so she was very different to her mother because she had a chance to be in the world with more independence and fewer limits. In understanding her own power, her own agency, to me she was very similar to the woman in Botswana who were very used to their husbands being forced to go off and work in mines in South Africa, being left so that their husbands could earn money to send back the Botswana so that they can pay taxes. And so they were woman who then took on roles that the men used to do. So it was an important scene for me that then was echoed later when Ruth asked the women, 'Can I help you? Because I don't know when I'll be back.' To me that was them recognizing the similarities, understanding that they were self-sufficient women, committed to their families, coming together."