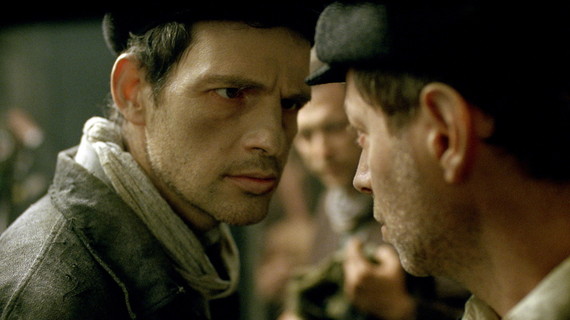 First-time director László Nemes co-wrote and directed "Son of Saul," a critically acclaimed film about Saul, a Hungarian prisoner in an unnamed Nazi death camp. He has been assigned to work as a sonderkommando, helping to escort new arrivals into the gas chamber, sorting through their clothes and possessions, scrubbing the floor, and removing the bodies, which the Nazis contemptuously refer to as "pieces." When a boy briefly survives the gas chambers, Saul, with increasing desperation, tries to provide this one "piece" with a decent burial. The film was an award-winner at Cannes, and its critical acclaim includes many end-of-the year nominations and awards from film critics and a Golden Globe nomination.

In an interview, Nemes spoke about the unique camerawork that keeps the audience intimately connected to Saul as he moves through the horror of the camp. We see through his eyes, so some of the worst horrors are glimpsed only at the edges of the frame. And we spoke about the lessons we still need to learn from the history of bigotry and genocide.

From my point of view, the film immerses the viewer and communicates in a very visceral way the experience of the individual in the concentration camp and it gives an intuitive sense of what limitations the individual had to face in the extermination process and what the Holocaust was like. That is important because the Holocaust became, in our common knowledge, a sort of abstract thing devoid of all meaning; it just became like the Titanic, a sort of myth. But understanding the individual and how really to feel something in the position of the individual is something that we never understood, never felt and that's why I made this film. I didn't want to make an intellectual film; I didn't want to make a film based on the distance and the sense of escape that's all films of fiction established with all their strategies aimed at reassuring the audience. I wanted to, on the contrary, to say something about the core of the nature of this human hell that is not that remote from us in time and in civilization or perspective, it is not that remote. We are living in a world of dreams and we might wake up in the nightmare if we don't fathom or try to understand the potential evil lying within human nature.

Nemes said that much of the history we know about the Holocaust focuses on those who survived, partly because it is human nature to look for stories that show resilience and partly because so much of what we know comes from the stories of those who did survive. He did not want to make this a story of survival. "People want to hear true stories because seeing a true story, there is an identification with the survivor. How many stories are lost for one that remains? How many that we are not aware of? So that's very important."

Saul takes terrible risks for what many people would consider a lost cause, some prayers over the grave of a child who may or may not be related to him. Nemes acknowledged the connection to Antigone, Sophocles' tragic play about the daughter of Oedipus, who dies trying to provide a religious burial ceremony for her brother. He said that in both Antigone's case and Saul's, more than the individuals are being murdered; their culture is being destroyed.

What's striking is that this is a place not only where people were killed but also where people were burnt and in a way it was a process to erase their history as if they never had a past. That is something that is for me, very important. Saul gives a history to this child, gives a story so that there is something very universal or very human in this.

Nemes did a great deal of research in the journals of the sonderkommandos.

They are the so-called scrolls of Auschwitz that are really not widely known actually but they should be known. They never made it to the canons of the Holocaust literature although they are primary sources of incredible force and insight. They show the present very clearly to the reader to give the impression of being there; to be present during the assimilation process and described in great detail what's going on in the crematorium. And then there is the canon by the Hungarian doctor Miklós Nyiszli who came back after the war, he was a survivor and also the testimonies after the war by members of the sonderkommando. So we went into great detail of their everyday lives to know what their lives were about and we used that as much as possible. But then we had to write the films so we didn't want to make a documentary film; it had to be a feature film. But it is grounded in historic reality as possible.