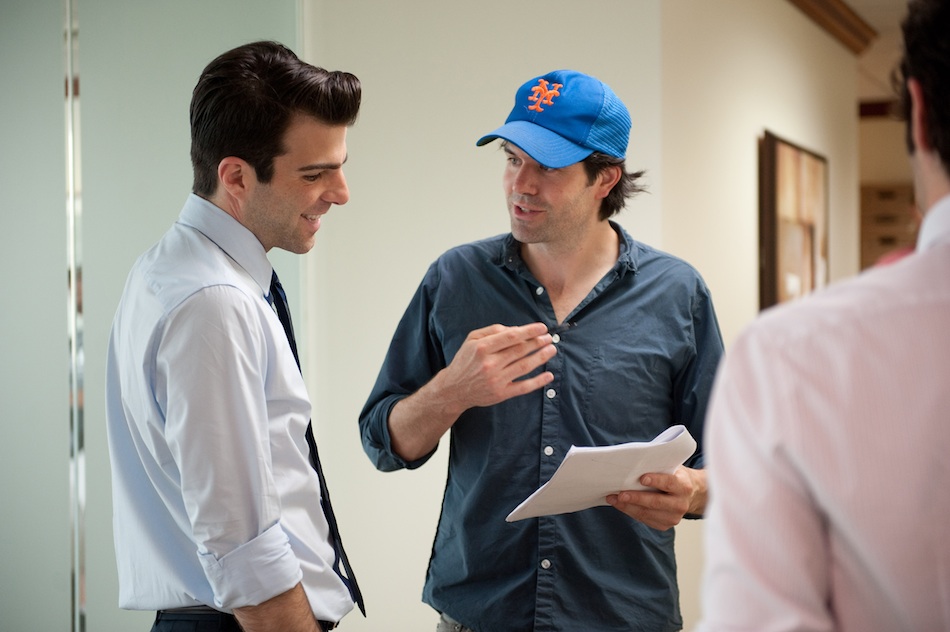 Actor Zach Quinto and writer-director J.C. Chandor on the set of Margin Call.

Three years ago writer-director J.C. Chandor began work on his debut feature -- a tense drama about 24 hours in an investment bank on the eve of the 2008 financial market collapse. Chandor and his producers -- including star Zachary Quinto of Star Trek fame -- managed to pull together a modest budget and a cast of actor's actors. Not many first time feature directors can boast that they got to direct Kevin Spacey and Jeremy Irons, let alone put them in the same scene.

What Margin Call, which opened over the weekend, has on its side is more than just star power. It has almost eerie relevance given the recent and burgeoning Occupy Wall Street movement that has emerged nationwide.

Filmmaking is a time intensive process, and Chandor had no way of knowing that the country would still be in the grip of the '08 collapse by the time his film un-spooled. Nor would he know that the long wait for release -- the film took its first bows in January at the Sundance Film Festival -- would pay off due to the renewed focus on the financial sector thanks to Occupy Wall Street.

"It's fun to see this energy finally bubbling to the surface here," Chandor says of the Occupy movement.

"For some reason, over the last 10-15 years, we've allowed [ourselves] to be pushed. You know, essentially, the banking system by its creation -- and even more so today with the way that essentially two or three years ago we had to socialize our banking system again -- the banking system is there to serve the citizens of the country, not the other way around. And I think people have finally started to realize... and this comes from within the banking system."

Chandor has an insider's access to the banking world: his father was at Merrill Lynch for 35 years.

"I grew up in suburban New York City and London, England where my dad was working. So those are banking communities, and then I lived in NYC for the last 15 years of my adult life and a lot of my friends and associates worked in that business."

Yet by having never worked in the industry himself he retained an outsider's perspective with an insider's understanding of what makes the banking world tick. One of the major goals of Margin Call is to demystify the investment banking world. To get away from the melodrama typically associated with the films about investors and show the human side of the people in the industry.

"The first thing is that most of the people don't make as much money as everyone has built up in their minds that they do, which I think is important for people to know. That everybody doesn't make 10 million dollars a year in the financial industry, which is these crazy numbers that sort of get thrown around. Most people do really well, but it's in this sort of 200-500 thousand dollar range. Obviously it's a lot of money to people making 40 thousand a year, but if you're living in New York with 2 kids..."

Nor is greed the central motivating factor. It's not the wild aspiration of wealth that drives the banking world, but the fear of losing what you already have made.

"Fear comes into it, from that the sort of doling out of money is done, not wily nilly in the way that people might think the banking industry does. Which is like 'throw money at everything! Give em as much as they can!' Obviously towards the end of the movie, when the higher-ups are literally panicking about where they are, they do start throwing money at the problem."

"But throughout normal operations at an investment bank, what people are paid, the compensation packages are highly, highly scientific numbers, which are just enough to make the people feel that they're uber-wealthy and enough to have them spending a lot of money so that they're hooked into the system. So that they buy a bigger house and need the job, and are then as a result the way that all of us are when we're in financial need."

Chandor says that once in that cycle, the fear is what challenges the ethics of everyone involved; born out of the financial sector's relentless demand that everyone make the most money possible.

"Shockingly [a firm] could be having their biggest year ever and they'd still cut 5-10% of their work force as a motivational tool. Essentially cutting the fat. And then they'd bring in a fresh new crop."

"You start to run the math that they cut 5-10% of their workforce almost every year just as natural selection. You start to realize that after being at a company 10 years, you've seen this process in this brutal, brutal way. You start to see who gets cut away and who doesn't get cut away; and what the people that stay, what they're values were and why they've been invited to 'stay in the club'. And so you know fear plays a huge, huge part of that obviously."

Just how broken this system has become is something that's not just on the minds of the Occupy protestors.

"There's real introspection within the banking sector as well. No matter what I say in the film these are not idiots running these banks. So on a certain level they were blinded by things and acted idiotic, but they're not idiots. These are a lot of very intelligent people that are quite thoughtful at times. It is such a huge complex system that the problem is... and this is one of the themes of the film obviously... is that no one really on Earth has the skill sets to actually grasp and fully understand what is happening in every sector of the banking industry on a global level. It's just too complicated."

"That by its very nature is scary, is dangerous, is overwhelming. It makes you want to put your head in the sand. All the things that it kinda did to us. I think the sort of gut feeling is that something doesn't smell right here."

The writer-director points to this as one of the reasons that concrete demands have been slow to emerge from the protests.

"The reason that people are having trouble coming up with exactly what we want is because it's infinitely complicated."

"We print money. The people that print the money is actually us. The government of the United States of America. By its very nature, we control that, and this system is there as representation of us. And when a majority of the people start to take a look at that system -- and it takes a while, obviously longer than we'd probably like -- when you continue to look at that system and see that no longer is it actually representing us in an honest way, and there's manipulation going on, and that sort of pisses you off."

"If people actually understood what was really going on in some of the corridors of power here, where people are essentially being given money at extremely favorable rates and all they're doing about it is investing it on they're own behalf. Essentially making money from money. Then you'd actually really get some people in the streets."

Chandor sees what's happened through a human lens: the drive to maintain position in the banking sector, driven by fear, leading to human folly.

"We're humans. We're idiots. We always push something too far and then have to get snapped back. But the interesting thing is just saying that doesn't mean that we all should give up. The reason it snaps back is because people stand up in the street and say 'Get back here you've gone to far the other way'."