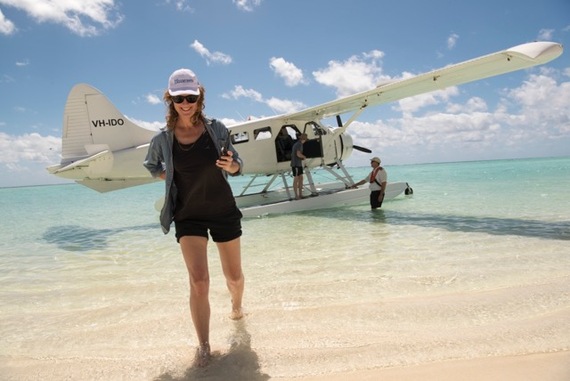 Director Martha Jeffries recently wrapped on two stories for the second season of Years of Living Dangerously, an Emmy Award-winning show about climate change. The show goes blockbuster, seeking to finally capture mass attention regarding an issue that stands to affect every living thing. That worked pretty well first season 'round. As Martha notes in this interview for Impolitikal, climate change can no longer be sidestepped as a scary unknown we hope will go away. Extensive research shows that the world's climate is changing, largely due to human activity - and if people, policy and business continue as usual, the economic and social impacts will be felt by all.

How did you come to work on Years of Living Dangerously, and what's your role?
I'm directing and producing two stories for the upcoming second season of Years. I spent a decade making travel television and shot in many testing and sometimes volatile locations, and was starting to see the impacts of climate change in different places around the world. I met a producer from season one who kindly recommended me to the executives and I jumped at the chance to tell these stories.

What can you tell us about the episodes you've worked on?
My two stories are at opposite end of the spectrum - among the darkest and most hopeful this series has to offer. The first is on the oceans. We look at ocean warming and ocean acidification and the impact these human-caused phenomena are having on coral reefs. During filming, the worst coral-bleaching event in human history occurred. Over 90% of the Great Barrier Reef suffered, some of which will never recover. Many reefs will be reduced to a slime-clogged deadzone. We are losing one of the seven natural wonders of the world - something that took thousands of years to grow. One in four fish rely on coral reefs to breed and survive and nearly half a billion people rely on fish as their main source of protein. Think what the implications of that are for health, political stability and global migration. Terrifying.

My second story is on carbon pricing, which might be our best climate change solution. In a nutshell, carbon pricing is a user charge. If you generate carbon, you pay for it. A price on carbon will drive a move away from fossil fuels by making them more expensive. Which would then allow for an easier transition to renewable energy forms and spur the innovation we need to tackle this problem. Many countries around the world already have some form of carbon pricing in place. My story focuses on a burgeoning student movement in the US, calling for a carbon price here. It has been incredibly inspiring seeing millennials from all ends of the political spectrum stand up and demand change. 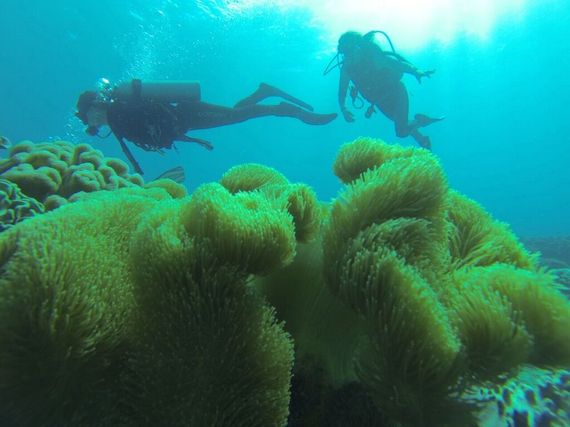 Shooting at the Great Barrier Reef

Did anything happen while filming that left a strong impression on you?
In the early days of production we joked we should have an inhouse therapist to help deal with the shock and distress many of us were facing as we discovered the realities of climate change. This isn't something that will happen in the future, this is happening now. It's an uncomfortable reality, but our planet has changed and our quality of life will change too. We can't push this one down the road any longer. It's happening now and it's happening fast. It's not too late, but we absolutely cannot keep dragging our feet.

I met with several families in the Philippines whose sole source of food and income is the ocean. These people live a very low-consumption lifestyle and are deeply tied to the water. But the reefs are dying and fish are disappearing. The people who are contributing the least to climate change are those who will suffer the most. It is a great injustice.

What was your stance on climate change before working on the show?
I've always been concerned about climate change, and I thought well-informed. But I'll admit, the speed with which things are changing was a huge surprise. We're right on the precipice.

What have you learnt personally through working on it? Has it changed you?
Where to begin! We did all of our own research, so the first few months of the job were spent studying climate science and the social, political and economic implications of each story. The terrific thing about a high profile project like this is the incredible access to people. I've spoken to some of world's most prominent scientists, politicians, journalists and economists over the past year. It's been a real privilege.

I also learnt to dive for my ocean story since I wanted to film a good portion underwater. I've always loved the ocean and have been a casual surfer for a few years but never dived. It gave me a much greater understanding of the ocean, which in turn gave me a greater sense of responsibility to tell this story well. The ocean gives us so much - oxygen, food and a temperature with which we can live. I think many of us take the oceans for granted. But they are fragile, and without them there would be no life on the planet. 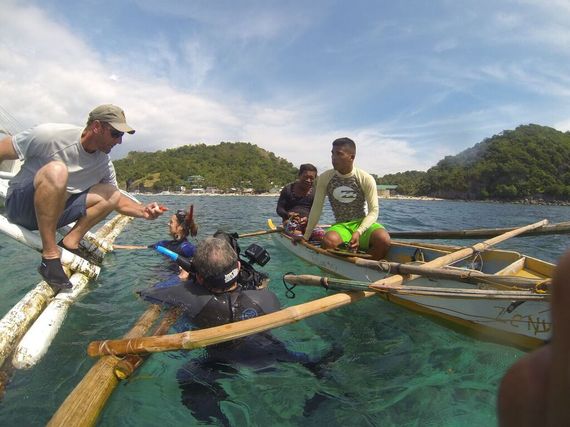 On location in the Philippines

In terms of personal change, I think this series has brought out the latent activist in me. I now realize the responsibility to make change lies within all of us. Sometimes it's as easy as picking up the phone or visiting your local politician and making it clear that action on climate change is a priority.

What are some of the barriers to effective action to address climate change?
Good old-fashioned political gridlock. It is astounding that it's an unofficial Republican Party line to deny climate change. I spoke to many Republicans who know climate change is real and are deeply concerned, but they're afraid of alienating their voter base. We don't have time for infighting. As the world's wealthiest nation the United States has a responsibility to the rest the world to lead on this, but it's falling behind.

What are some areas of progress?
The world has come a long way in the past 18 months. The climate march on New York, which attracted hundreds of thousands; COP21 in Paris; and the Pope releasing an encyclical calling for urgent climate action created a much greater awareness of climate change and the need to address this fast. There are great leaps being made in renewable energy and non-polluting technologies. And now almost every leader on earth agrees we need urgent climate action.

Roaring Fork Films is the production house behind the series. Can you explain a bit about their motivations for making the show?
Roaring Fork Films was founded by David Gelber and Joel Bach. David and Joel were a producer team on 60 Minutes for many years, and after working on a couple of climate change stories they realized this was the story of our lifetime - but that there was a huge gap in communication. No one was telling the stories of the everyday people being impacted. They have done an amazing job bringing together an incredible cast and crew to make a high quality, ambitious, sensitive and exciting show that demands attention.

There are a lot of big names involved with the project, on-screen and off. Why do you think so many celebrities have been willing to contribute their name and their time to help highlight this issue?
We've had a terrific group of people involved. There is power in fame. People will often listen to a celebrity far quicker than a scientist. A huge problem in the climate crisis has been communication. Scientists have been telling us for years that we have been pushing the capacities of this planet too hard, but people have refused to listen. Trained communicators and spokespeople have a responsibility to get onboard and use their voice to reach the numbers of people required to demand change. Many of our correspondents were not climate experts but did want to know what they could do to help. Learning on-screen was the best gift they could give.

Season two of Years of Living Dangerously will premiere on the National Geographic Channel this October in 170 countries. Find Martha.