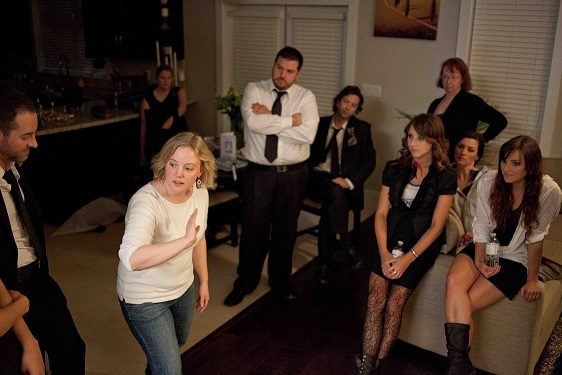 Afterparty is an improv film that will have its world premiere at this year's Whistler Film Festival on December 5 at 6:30 p.m. Directed by award winning Michelle Ouellet, and produced by Sociablefilms. Photo by Richard Amies.

Sociable Films is a boutique film production company based in Vancouver, British Columbia. It was founded in 2011 by Nicholas Carella, Ali Liebert and Michelle Ouellet, who were unified by similar creative goals and a desire to "make movies sociably."

Michelle Ouellet weighs in on the making of AfterParty!

You have many wonderful credits. How'd you get into show business? What have you learned from your first and second production versus what you do now? Did you go to school for this?

I attended Cardinal Carter Academy for the Arts, a performing arts high school in Toronto and have always loved performing on stage. I think the transition from performer to director happened in second year at university (at the University of Toronto where I was doing my undergrad in English) when a play that I had acted in got accepted into the University of Toronto Drama Festival. For whatever reason, I decided to direct the play instead of act in it again, and I realized that I preferred telling a story from the other side of the table. I have never looked back!

The learning curve on my first film was steep, but I had a great cast and crew who I really leaned on, and watching them work taught me everything I know today. I made a lot of mistakes, especially on the business side of things, but I am so grateful for that experience because it has helped me to really understand both the art and business of filmmaking. In today's day and age, a director has to be both an artist and a businessperson. I really learned that lesson on my first film.

Afterparty is mostly improvisation. Is there any sort of script?

There was no script, so the film is 100 percent improvised. We did work from a 40 scene outline, which I created and continued to develop throughout filming. The initial idea for Afterparty came from myself, Nicholas Carella and Graham Coffeng, who plays Charlie. The three of us were working on a local cabaret show called "The True Heroines," and we started throwing around story ideas one night after rehearsal. Graham, like the character he plays in Afterparty had moved to Vancouver (from Toronto) after the end of a relationship, and was house-sitting his brother's estate, which had just been sold (you may notice this is fairly close to the context of the film). We thought: "Why not shoot something here before Graham has to move?" This was in November 2011, and we had a little over six weeks before Graham had to be out of there. I think we decided on improvisation because we felt the time lines were too tight to write a polished script. As it turned out, the six-week time frame was too tight to do anything at all but we kept meeting well into the new year developing the characters. I think by that time we were all intrigued by what this film could be without a script, so we stuck with the idea of keeping it improvised. By June 2012, we were shooting the film.

Knowing this film would be mostly improv, how did you choose your actors? Did you even have a backup list?

I wasn't overly concerned with choosing actors who were comfortable improvising. I was most concerned with choosing good actors who would be up for the adventure. Nick, Graham, Ali and I spent a lot of time brainstorming and coming up with our respective wish lists, and I am happy to say that we were able to work with all of our first choices. All of the cast are close friends, so it was really a dream work scenario.

What does this mean in simpler terms: "'Making movies sociably' is an artist-driven philosophy, where artists' resources and talents are pooled and shared in a familial spirit, resulting in films that are both artistically fulfilling and fiscally responsible."

In simple terms, "making movies sociably" is a way of working where we share both the responsibility and the rewards that come with making the film, with everyone involved. As a result, we are making films that both meet our creative standards and are budgeted appropriately.

The actors are also billed as producers. How does this work, exactly? Did anyone get paid? Explain the producers' jobs -- did they put money toward the production? Did you get paid? How did you deal with the union for those actors who are union members?

The actors, with the exception of my main Sociable collaborators Nicholas Carella, Ali Liebert and Graham Coffeng, were given producer credits in exchange for the time they donated playing their respective roles, and later promoting the film, a phase which we are entering right now. Even to pay union minimums (in a "scale minus" agreement) would have cost us, in excess, $95,000. This figure doesn't even take into account that the cast of Afterparty generally would command much more than that, so our budget would have been busted! We were, however, able to offer ownership of the film in exchange for their time and we were able to work with UBCP (the actors union) under one of their agreements to make that happen. Thank you UBCP. No one in the producer's co-op got paid during shooting, but we all own a percentage of the film. We had one investor, Yolanda Jessel, who financed production. Sociable Films (Nick and Ali and I) financed our post-production.

You have two partners in your company Sociable Films: Nicholas Carella and Ali Liebert. How did you all first meet and what made you even think about starting a production company? Why are you the director? Who came up with the bicycle logo? Did you keep a day job while starting this?

Nick and I are married and have been working together for the past ten years -- first in theatre and now in the film industry. On my first film Hooked on Speedman I cast a wonderful actor (who lived in Vancouver at the time) named Christopher Jacot as one of the leads. I cast him from a tape, but I had a great feeling about him and we became fast friends. We shot the film in 2006 in Toronto, and by the end of 2007 Nick and I had moved to Vancouver because Christopher had spoken so highly about the film industry in the city. The following year we met one of Chris' closest friends, an actress by the name of Ali Liebert who was working with Nick on Harper's Island. The three of us hit it off, and Nick and Ali had such natural chemistry that we thought: "Why not make a film together?"

I think the initial idea to actually start a production company came from Ali, who after a trip to L.A., had a chance meeting with S. Epatha Merkerson who urged her to start her producing career. This industry can be very cruel to women, and starting Sociable was a way for both Ali and myself to have some control of our futures. When Ali pitched the company to Nick and me, I thought: "If we could make one movie together or ten, why not make ten?" And Sociable Films was born. When we started the company I worked a full time job for the first year. It was tough, but having that financial stability during our first year in business provided peace of mind.

By no means am I the "resident" director, I'm just the only who directs -- for now. I know Nick and Ali both have ambitions to direct films as well, and they will be able to when the right project comes along because they have created a place where they can nurture their own projects.

We named the company after an old sociable bike because we loved the image of two people sitting side-by-side and moving forward together. Community is really important to us and we wanted a logo that reflected that. Speaking of our logo, our very good friend Trevor Wide designed it. He added the stamped look. We loved the stamp idea because it feels very DIY, which is what we are all about. The logo says everything about who we are as a company: community oriented with a DIY approach.

Please visit back soon for Part II of the Afterparty conclusion with Michelle Ouellet and Ali Liebert, who is currently on "Lost Girl!"