Elysium: Ooh, the wheel in the sky keeps on turnin'... 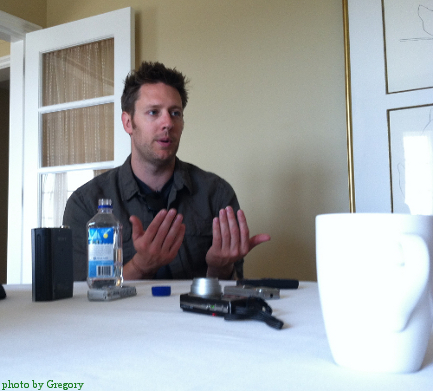 Neill Blomkamp: Director (despite his own protestations)

Me:
Can we talk about science and design? Because you project into the future some ideas -- and everybody has to take a risk in doing that: because eventually your film will be seen in that year. And it may be funny, or it may be: "Oh, they got it right."

Neill Blomkamp:
The key is to go far out enough that you're dead by the time it comes out. You know what the difference is, though, with Elysium, is that it's not speculative sci-fi. That is a little bit of a thing: Like, if you really get into speculative science fiction, about what life in the torus [the aforementioned space station] would be like, and what society would be like in 2154, then you start to lose the metaphors, you know. And it's meant to be rich and poor: and so rich living up there -- if you start to really think about how technology has changed and become part of the society, you're now making speculative sci-fi. And it's like it's not rich people with swimming pools -- it's now something else.

(Aside: That's cool. Professor Tolkien -- by birth a South African not unlike Mr. Blomkamp here -- firmly wrote of his own [perchance contestable] stance to "cordially dislike" allegory; but I like it a lot.) 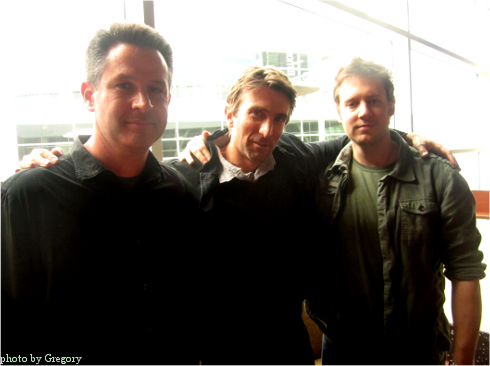 Me:
Some of the most successful science fiction films usually resonate with audiences not because of the technology -- but because you love Dave Bowman; or you love Ripley; or you love Deckard in Blade Runner. And you're working with some of the top talent in the industry now, so as a director, you really need to make sure that we care about these characters. So how does that challenge you now? -- in dealing with a lot of hardware, you also have to get subtlety from some of the best performers in the industry.

NB:
Well, I think Jodie [Foster] -- Jodie's character, particularly, in my opinion, didn't require subtlety. There was almost a nod towards, like, the genre that we're in, you know -- and she's just blowing shit up. And it's like, you haven't really seen her do that, which is cool. Matt's [Damon] is a little bit different. One of the reasons that I actually wanted to get Matt was because I feel like he has -- because I haven't worked with movie stars before, I like the idea that they come with an inherent baggage, or currency with the audience, either positive or negative. The audience already knows this person -- it's kind of an interesting thing. So what I wanted with him was a guy that I felt the audience would always like: Damon, to some degree, it's impossible to not like him. And then build on top of that, you know, so you can make him a little bit more of a thug, and you can kind of put him in a little bit more of a dodgy set-up. And that really, that was the thinking, behind that. 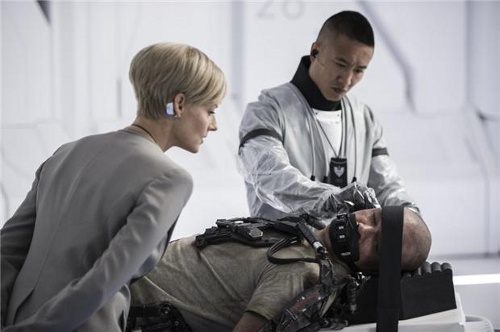 Jodie gently reminds Matt that she joined the Oscar club before he did.

Me:
Um, you have created a metaphor that -- I just, I read your anecdotal material about Tijuana--

NB:
That was true, though!

NB:
Well, you know, the thing that's interesting, it's kind of like directing almost puts you on the psychologist's couch in a way, like where you start to, you're like: "Oh! That is really kind of true!" Because you never self-analyze, you know, unless people ask you questions. But what I've started to notice -- I think is true -- is the ingestion of things that I found stimulating as a kid would be no different to a kid in L.A. You know like a young filmmaker in L.A. who just wants to work in Hollywood when they're older, right? 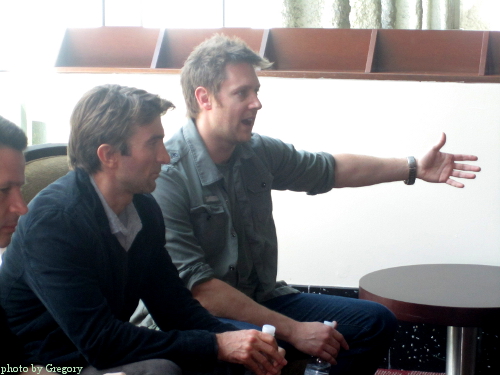 Neill notes that the Elysium station is quite big.

NB:
I think that what I was looking at and what they were looking at was identical. Like, the same -- just, let's say Star Wars, for example, okay? And so when people ask my influences, my influences I think were relatively the same -- but now that I'm older, what is really interesting to me is: It wasn't watching Star Wars on television, or looking at images by Chris Foss; it was when you close the book, or you turn off the television, that's it's Johannesburg. And that really -- it's like, watching Star Wars in Joburg, and being all into Star Wars, but then you leave your friend's house, and you drive on the highway, and there's, like, burning shacks, and the 1988 South African Air Force helicopters flying around shantytowns all day, that you arrive at District 9. 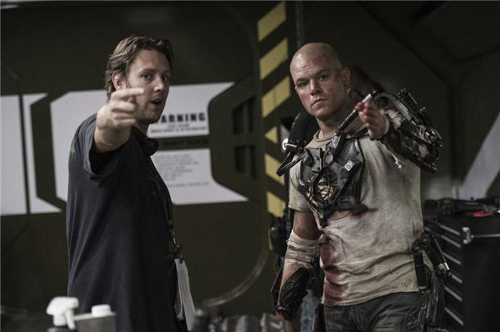 NB:
You know what I mean? That's the weird part, I think, is the South African-Apartheid childhood -- mixed with an interest in sci-fi. So I think the influences are kind of, the stuff that -- I think it was a little bit more difficult for me to get my hands on stuff, to some degree. But it's still, Joburg was relatively -- there were sanctions, but you could get stuff: it was just difficult.

But there was a bookstore downtown that I always used to go to, which was actually probably the nucleus where everything came from that I liked. They had everything from magazines like Fangoria to, like, books that would be, like, the art of Blade Runner. And that was like mind-blowing to me -- because I keep saying I'm totally visual; it was just all this material, that was, like, insane. And then I would watch the same films that a Californian kid would watch. And I did a lot of personal -- I just loved artwork, I was just always doing artwork, and was always influenced by stuff that I was seeing.

I was actually really into Judge Dredd, too, when I was younger. Like, 2000 AD. Yeah, big time. But there were lots of things like that. 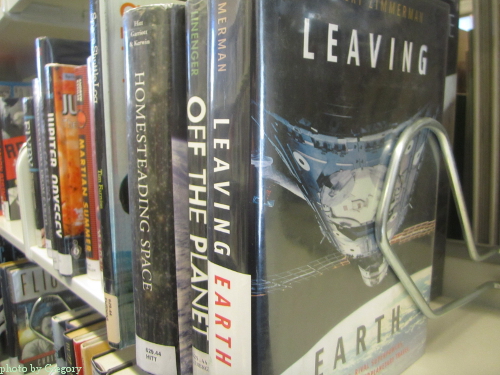 Stumbled upon this section whilst writing this article. Hmmm...

Promotional photos courtesy of Sony/TriStar; the rest by Gregory.