A hotel maid has decided to spill the spill the dirt in hotel housekeeping. The interview was shared with hotel search trivago.com by an employee of a five-star property in Orlando, Florida. 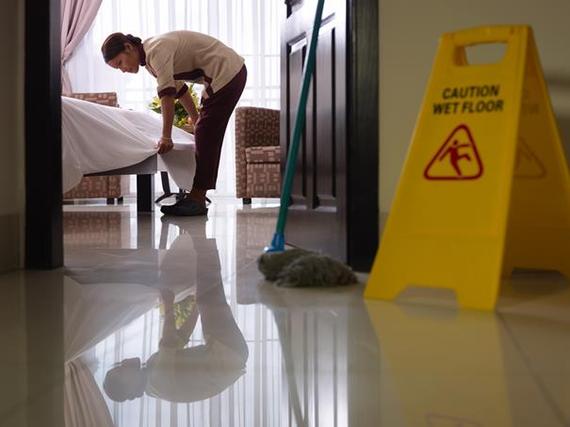 How do you usually begin a typical day?

My day begins with a staff meeting at 7 a.m. Here we discuss the days plans, be told how many guests are there that day, how many new guests are coming, how many rooms are free, how many are empty. The actual cleaning begins at 3pm with a half hour lunch break.

How many rooms in total do you clean in a day?

Is there anything that you don't clean in the rooms?

When I have time I will clean everything, but sometimes it's so busy and management still expects everything to be cleaned just as fast as on a day that isn't as busy. If this is the case, I usually won't vacuum, and will just do a fast clean, like rinse the bath instead of scrubbing, or dusting over surfaces quickly. The remote control is something I would say doesn't get a proper clean; I just go over it with the same cloth I use for the bedside table.

Are the glasses, cups and cutlery always cleaned after every guest? And cleaned well?

Upon check-out, all glasses, cups and cutlery are cleaned and replaced with new ones. I wouldn't say they are cleaned well, though; they are put through a big industrial dishwasher that sometimes doesn't do a great job. During a guest's stay, we will only change the glasses if they request it.

How often are pillows replaced? What about the bedding?

Where I work now, bedding and pillows are replaced at every check-out. However, before, when I used to work at a budget hotel, we rarely changed them, even when there were sweat stains or marks on the pillow, we would just cover it with a new case -- some differences between staying in a budget hotel and a luxury hotel.

The more senior staff can sometimes make it stressful. They fight for the more expensive rooms or suites because better items are left behind for the taking if nobody claims them. They also fight to take the better trolleys, leaving myself and others with old ones that don't have the right products or supplies, meaning a lot more running around.

What is the pay like? Do you struggle to get by on your income?

Especially in the U.S., it is a huge struggle and more so if you have a family. It is almost impossible, similar to what you would earn at a fast-food restaurant. That's why tipping is important for us.

What do you really think about how guests behave?

I find a huge variety of guests -- from extremely clean where you sometimes question if the room is actually being used, to others, where you don't even feel comfortable going in the room because it is just such a mess. There are some that leave pizza boxes and garbage around, underwear on the floor, and it's impossible to clean the room. Some guests really expect you to clean up after them like you are their mother.

Do you find guests to be annoying at all? What is it that you found annoying?

I find it annoying when a guest has made too much mess to fix in the given time. To be honest though, management is more annoying. Sometimes they have high expectations, but they don't give you enough time. Some of management can also be demeaning... Once a manager ripped apart all of the beds I had made that morning and told me to redo them all because they weren't made to their standards.

Do you ever barge in on guests or get annoyed if they don't answer door quickly/at all?

Yes, I do get annoyed when it happens but I can never show it, because if guests complain about it, you could lose your VIP roster or even some working hours. Besides, the nicer you are despite how annoying, the higher the chance of receiving a tip, especially if they are in the room and they get the chance to meet you.

Do you ever have a nap in one of the rooms?

Yes, we do actually -- if we are really tired and have the time. For example, if we are doing a large suite and are given longer to clean it, we will have a nap in the beds. Something else we do sometimes is that we use the toilets in the guest's bathroom, but only if we are super busy and don't have enough time to go to the staff toilets. It is something we are not supposed to do, but many do it anyway.

Do you ever touch guest's belongings?

We are told that we are not allowed to touch anything that belongs to a guest, but we are also told that we must make the bed and that we must change the towels. So if a guest has belongings on the bed or on top of the dirty towels, sometimes you have to move it.

What is the strangest thing you ever found in a hotel room?

Once I found T-Bone steaks left in the fridge that I took home for dinner, but the strangest thing I found was what originally what I thought to be an abandoned baby lying on the bed. I carried it and took it to management. It turned out to be a robot or fake baby that would make noises just like a real one. It was left by guests attending a medical or science convention or something. It scared me so much though because it seemed so real.

If someone's rude to you do you seek revenge and how?

I personally have never done anything but I heard of someone who was so angry about a rude comment made to them that they cleaned the bathroom floor with a towel and left it for the guest as their new towel.