You can't live in Connecticut and work on anything related to disability services and not know about Southbury Training School. While addressing the concerns of a lack of affordable and adequate housing for people with disabilities across the state, Southbury has been the topic of numerous discussions (and disagreement). Yet, I was struck by how few policymakers, advocates, parents, and individuals (almost none) had actually visited the grounds. So, I decided to take a trip.

I didn't know what to expect. For someone my age, institutions are almost a mythical thing. For the most part, they are referred to as something of the past -- places where people used to live and where bad things happened. We hear leaders and housing directors note efforts to "not feel institutional" or "not be institutional" in the provision of supports and services. When you meet older individuals who work in disability services, they often refer to a period (almost a turning-point) of deinstitutionalization. But few acknowledge this period of deinstitutionalization is a period we're still in the thick of. Institutions aren't a failure of the past, they're a reality of the present. 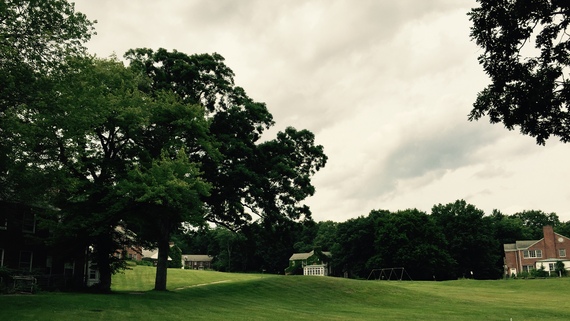 Now, don't freak out. There is no part of me that supports institutions (or any form of reinstitutionalization). I don't believe housing should separate people with disabilities from experiencing life alongside individuals without disabilities in thriving communities. I don't think Southbury should exist in the form of an institution as it does now.

But, I also wasn't horrified.

And my lack of horrification (as someone who is inclusion-obsessed and generally critical of less-than-stellar services) kind of freaked me out.

So I reflected. And here's where I landed... my whole understanding of the idea of "institutional" was defined by bad things not to do. My perception was based on this idea of avoiding being institutional. It was about the "de" in deinstitutionalization. It was all about what we needed to remove.

Based on the avoidance principal, Southbury seems to have achieved much of the "de" in deinstitutionalization. And, it wasn't all that different from other group homes or residences for people with disabilities I've visited in my life. Yes, something about Southbury didn't feel right to me, but it also didn't have the features that I knew to be wrong.

Perhaps where we're missing the boat is that we've spent so much time preoccupied with deinstitutionalization that we've failed to focus (or even hone in) on what it means to create communities, build life-giving places to live and thrive, and what we can add to the life of someone with a disability to make it a happy one.

Heidi Grant wrote a piece for Harvard Business Review on "Nine Things Successful People Do Differently". Number nine? "Focus on what you will do, not what you won't do". Grant says, "research on thought suppression (e.g., "Don't think about white bears!") has shown that trying to avoid a thought makes it even more active in your mind". So, successful people focus on what they need to do right in their jobs, relationships, and even diets, rather than what they should remove or avoid. The same could hold true for our approach to the issue of disability housing and our long, continuing, incomplete journey to create supportive communities for people of all abilities.

I'm working on identifying what those practices and supports we can do or should add in the disability housing space are. I've met service providers who seem to be well on their way to figuring it out. So far, I think it has a lot to do with choices across all facets of life, meaningful and lasting relationships, intentional community identities, true connections to the people and places around you, and respect. The reality is that it's harder to define what you should do than what you shouldn't. And, they're a lot harder to monitor, regulate, and track. But, at the end of the day, that's where we need to put our focus.

Part of a series on disability housing in the US... Know an organization making a difference in or have a new idea about housing for people with disabilities? Tweet me @micaelaconnery.