Bad economics makes strange bedfellows. Thanks to our nation's misguided obsession with budget cuts, disabled children and the stock market face a common threat: an undemocratically-selected "Super Committee" which was formed during a national jobs emergency in order to ... reduce deficits instead.

The Super Committee: It's like Congress, except they don't let all the democratically-elected riffraff in. Think of it as our nation's "Platinum Legislature," a members-only private club where you have to know somebody important to get past the velvet rope. And it's like Fight Club, too: The first rule of Super Committee is that you don't talk about Super Committee.

There's compelling evidence that the cuts the Committee is considering will deal a harsh blow to the stock market. But before we see it, there's someone you really ought to meet.

This is Christina Taranto. 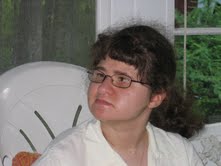 I can't tell you how much I admire Christina. As her parents explained to Social Security Works (with whom I am affiliated), she was born with severe disabilities. Today she lives in a residence for the blind in Massachusetts, where she performs volunteer work at an animal shelter and a community garden.

I admire Christina's parents, too. "My daughter can't speak for herself," her mother told reporters on a press call this morning. "So we want to speak for her. She's is now thirty years old, and she faces her life's challenges with courage and dignity. But that's only possible because of Social Security and Medicare."

Her mother added, "I'd like to know that she'll be taken care of after we die."

Medicare, Medicaid, and Social Security helped them provide for her care during her childhood. Her life today is made possible through her monthly Supplemental Security Income (SSI) check and a Social Security Disability Insurance (DI) check. Seventy-five percent of that income goes for her for room and board. The medications that control her grand mal seizures and other conditions cost several thousand dollars a year, almost all of which is covered by Medicaid. (There's a small additional cost, which is covered by her SSI and DI checks.)

As her parents noted, Christina "would have no housing, day activities, medical, dental or prescription coverage without Medicaid, Medicare and Social Security."

But at least it will help the economy, right? The stock market's will love it when they cut the deficit, won't it?

We've been told over and over that those of us who depend on government assistance must be sacrificed for the greater economic good. And we've been told that the economy will suffer if the Super Committee fails to come up with steep cuts. This sentence from a recent (and otherwise informative) article in The Hill is typical:

"Failure to strike a deal could rattle confidence in Washington and depress stock prices well into 2012, analysts say ... Banks are monitoring the supercommittee for fear of a Washington-driven market shock like the one that hit in August, when Standard & Poor's downgraded U.S. bonds. That decision sent stocks spiraling and preceded a month of heavy losses for investors."

The only problem with statements like these, which were fed to journalists after being spun from carefully-wrought talking points, is that they're completely wrong. And we can prove it.

The first line notes July 31st and August 1st, the last time a "bipartisan" budget-cutting deal was announced. In response, the stock market - which we've been told love these cuts - tanked. The second line notes the inexplicable downgrade of US debt on August 5. (The line shows the first day of market activity after the announcement.) What happened? The market didn't care.

Budgets cuts hurt the stock market because investors know where they lead: to stagnating economy where people don't have money to spend. That means the economy won't get moving again. Investors, and the rest of us, have seen the results of this "austerity" in the United Kingdom - a collapsing economy and riots in the streets. We're seeing it in Europe. And we've been seeing it at home, too.

They're telling us that "the markets" want budget cuts, and that they're afraid that US debt will be downgraded again by one of the discredited and corrupt ratings "agencies." It's a hoax. Budget cuts hurt the market this year. But it shrugged off the last downgrade and went on about its business.

Nobody really gains by cutting Christina's benefits - nobody, that is, but some right-wing ideologues and the rich people and corporations that finance our broken political system. Who would serve such a cynical agenda?

Christina's fate is in the hands of a secretive group with extraordinary powers over the lawmaking process. Its twelve legislators have been empowered to meet in secret, behind closed doors, to draft a deficit-cutting plan that will be voted up or down by the entire Congress - with very limited debate and without any amendments. Unlike other laws, their plan can be passed with a simple majority in the Senate. The Committee's members can cut their deals in private, away from the open debate that is so central to the democratic process.

The mild remnants of democratic process that cling to the Committee may only be theater, for all we know. Today, for example, the Democrats on the Committee announced their "plan" for deficit reduction. It's not very good -- more budget cuts than tax increases on the wealthy, though they pretend otherwise - and Draconian reductions in Medicare and Medicaid. They're calling for $400 billion in cuts, half of which will come from benefit cuts to recipients like Christina, our older relatives, and - someday, if not today - most of us. Flawed as it is, however, it's far better than what's likely to come out of the entire Committee. It includes a little stimulus spending, for example, and it doesn't raise the eligibility age for Medicare.

But who's to say they'll even propose this plan, much less fight for it? How do we know they won't just wink and nod to their Republican pals - "Gotta give the base a little red meat!" - then cut Social Security and Medicare and repair to the nearest bar for a round? How do we know they haven't finalized their basic deal already?

We don't. The proceedings are secret, remember? What we can know, based on back channel talk and past experience, is that the final product is still likely to include the "chained CPI." That's a harsh cut in Social Security payments that affects recipients like Christina, as well as other disabled people and seniors receiving benefits today.

Here's what else we know about the "Super Committee" members: We know that a lot of special interest lobbyists have been whispering in their ears. We know that the execrable "Gang of Six," a right-leaning group of Senators puffed up with conservative think-tank money and misguided Beltway cliches, recently "briefed" the Committee. And we know right-wingers and Social Security/Medicare haters from both parties, such the Co-Chairs of the President's Commission on Deficits (Alan Simpson and Erskine Bowles), were invited to testify too.

Other people who speak for ordinary Americans have been turned away, rejected by the Committee without explanation. Advocates and experts in the field including members of the Greenspan Commission that modified Social Security in the 1980s, asked to address the Committee and were refused. It's Members Only: Apparently you can't get in without a pass from the billionaires and special interests that finance today's Washington.

If you don't like the way this Super Committee deal is shaping up -- and who would? -- there are some steps you can take. First, you can add your name to this message for the President, which tells him not to cut benefits for Medicare, Medicaid, and Social Security as he makes his deal with the Club - I mean, the Committee. You can also let the individual Committee members know how you feel - especially if one of them represents you, but even if they don't. And you can follow the action, here and elsewhere.

I'm pretty sure that Christina's family would appreciate it. Funny thing is, the stock market would too.