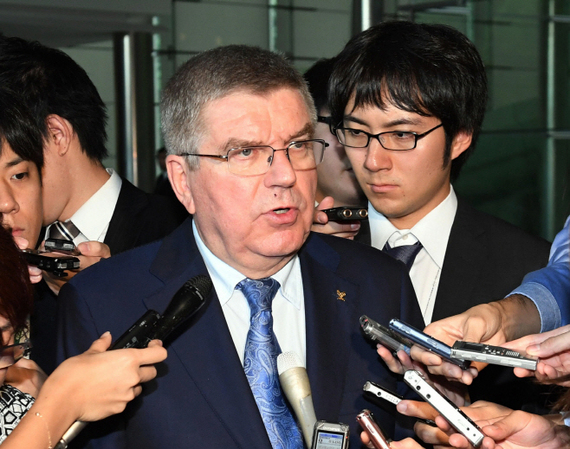 By Um Soo-ah, Tokyo correspondent, AsiaToday - It seems Olympic events will take place in Fukushima. Recently, Tokyo metropolitan government and International Olympic Committee have reportedly agreed that some Tokyo 2020 Olympic events should be held in Japan's earthquake-hit areas . IOC President Thomas Bach met with Japanese Prime Minister Shinzo Abe on Wednesday and suggested staging some Olympic events in Fukushima, hit by the 2011 earthquake, tsunami and nuclear disaster. After the talks with Abe, Bach met with reporters and told them the affected areas are "one of the options." He said, "This will send a message of confidence and hope to the people there."

He said that Abe also welcomed the idea. Since Tokyo governor Yuriko Koike, who wants to reduce the cost of Olympics, also agrees with the idea, the good mood for rapprochement is building up after a while. Once decided upon, some of the baseball and softball games would be held in the affected areas.

The venues for the rowing and canoe sprint events are not decided yet. As Tokyo governor repeatedly emphasized of moving the events outside the capital, there were even suggestions of moving them to an existing site in South Korea. Although there were many other candidates such as Miyagi Prefecture and Saitama Prefecture, Tokyo have decided to either build permanent facilities in Tokyo, build temporary ones, or move the events to Miyagi Prefecture. When Tokyo metropolitan government proposes the final venue by the end of this month, working-level talks between IOC, Tokyo Government, Japanese government, and Tokyo Organizing Committee will be held next month to make final decision.

Conflicts over venue construction began when Koike revealed that she will make best efforts to reduce the burden on Tokyo residents. Since Ms. Koike won the election last August, she is becoming increasingly popular. 78 percent of respondents were in favor of moving some proposed Olympic events while only 12 percent disagreed, according to an Asahi Shimbun survey held on Oct. 15-16.

Tokyo metropolitan government proposed changing the venue for rowing and canoe sprint competitions to the Miyagi Naganuma Boat Race Course in the city of Tome, Miyagi Prefecture. But this proposal is opposed by the Organizing Committee for being ineffective as the venue is too far from the capital.

It seems that the situation is getting better after IOC President Bach came to reach agreement. After meeting with Tokyo governor Koike, he said that the rules should not be changed, however he vowed to produce a very significant reduction in costs for the Olympics. The controversial venue plan for the 2020 Games seems to be making progress to a certain extent.