A few weeks ago at a popular haunt for old men, writers and boozers in Damascus, I was talking with one well-traveled old man about the Golan Heights. Some weeks earlier I had visited Quneitra, the Golan's capital, which fell to Israel in 1967.

The town was reportedly dynamited and dismantled by Israeli soldiers before their withdrawal following the October or Yom Kippur War. Removable fixtures down to light bulbs and any salvageable building materials were allegedly stripped from abandoned homes and sold to Israeli contractors. Bulldozers knocked down houses. The United Nations condemned in successive resolutions the "deliberate destruction and devastation" of Quneitra. Israel insisted the damage was caused by two wars and shelling from both sides; Syria downplayed any role of its own guns in the ruined shape of Quneitra.

"The whole thing was Henry Kissinger's idea," the old man said as he nibbled on a lettuce leaf between big glasses of whiskey. "Why else would the place be as it is today, 30 years later? He arranged for the Israelis to give it back to us, but they had to blow it up first, and the Syrians couldn't ever rebuild it." 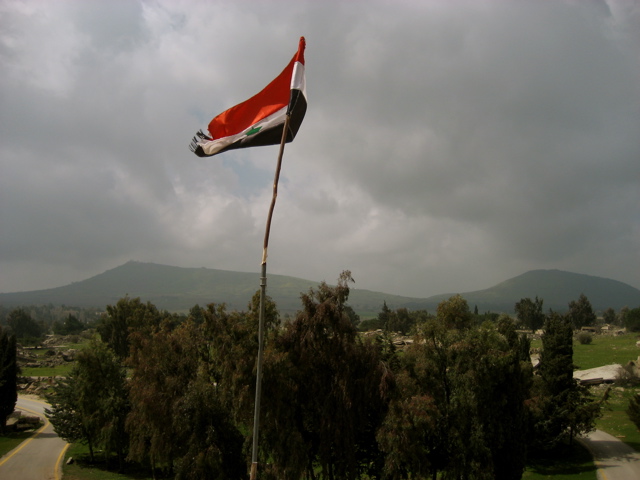 From the roof of the Golan Hospital looking toward Israel-occupied land.

When Syria regained a buffer zone monitored by the UN along the edge of the Golan in 1974, the government of Hafez al-Assad didn't touch Quneitra. He wanted it left as a monument to the "Zionist aggression" -- contemporary media on the withdrawal reported aggressive Hebrew graffiti and fresh bulldozer tracks -- and so it has.

The full explanation for its destruction aside, today the curious traveler can get a government tour of the town after securing an easy permit in Damascus. It is perhaps the best and most disturbing example of disaster tourism -- or, if you like, propaganda sight-seeing -- in the Middle East.

The Holiday Inn in Beirut was apparently designed to withstand an earthquake. And so it's still standing today, though it's riddled with bullet and mortar holes from the civil war, a wrecked slab looking over all the reconstruction glitter and cranes that captivate so people in Lebanon. But the place is not a formal war museum, and you can't legally visit. The memorials in Qana, in southern Lebanon, site of Israeli bombings of civilian shelters in 1996 and again in 2006, are a sobering and very different story.

In Egypt there is little evidence of wars with Israel, only land mines off highways in the Sinai, where you wouldn't go walking anyway. In the western desert and along the Mediterranean are the ghosts of German and British tanks from the Second World War, most of all at Alamein.

The parts of Jerusalem that were heavily damaged in the fighting of 1948, particularly the Old City's Jewish Quarter, were completely rebuilt by Israel after 1967. All new structures required a uniformity of historicized "Jerusalem stone" (a local limestone) and many of these new buildings incorporated older stones and foundations at their lower levels. Today the Jewish Quarter, which 50 years ago saw heavy fighting between Jordanians and Zionists/Israelis, looks like the newest part of the Old City, which architecturally it is. (Two books on all that.)

Quneitra, meanwhile, is a crafted relic of the belligerent decades before talk of Israeli-Arab peace. The place is not so much a town as a morbid park, although you're forbidden from freely walking around (land mines). The only signs of life on a recent visit were the occasional car or taxi of visitors and the Red Cross and UN trucks that shuttled toward the border. Druze farmers in the occupied Golan were recently permitted by Israel to send their apples to market in Damascus via Red Cross trucks. The area is verdant, a welcome change barely an hour south via service taxi from Damascus, and the green of the landscape -- including two big hills that signal that start of Israeli-controlled territory -- against the concrete ruins of destroyed houses underline the failures of war and peace here.

A fertile plateau at the head of the Jordan River, the Golan has always been an agricultural center coveted by whoever was in charge. Before the Islamic conquest, in the historian Hugh Kennedy's words, the Golan was "the summer pasture of the Ghassanids," a local protégé dynasty of the Byzantines. The pivotal Battle of Yarmouk, in which the invading Muslim armies routed the Byzantines on their way to capturing Syria and the rest of Fertile Crescent, was fought in the summer of 636 in the hills of the Yarmouk gorge near the southern Golan. Crusaders pitched camped in the Golan centuries later. Its land has always yielded water and food to whichever army trod over it. 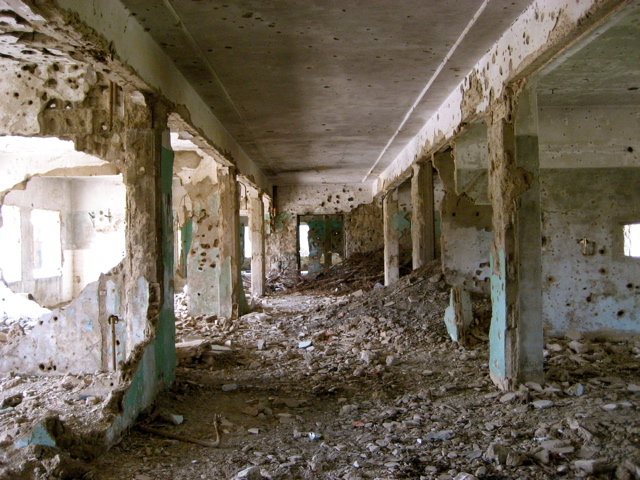 But all this was distant history standing in the hallways of the Golan Hospital. On the entrance to the pockmarked building was a rusting blue sign that proclaimed in English, "Destructed by Zionists and changed it to firing target!" The Arabic, naturally, was more eloquent. Inside walls to offices and patient rooms were blown out and we walked over pieces of concrete and other detritus. The elevator shafts had become beds for weeds, and the walls were covered in shot holes and graffiti that read "Forbidden entry" in Arabic and "Chechnya" in English. From the roof on the second floor we looked out over the town and the base of the UN monitors, which our guide Aseem forbade us from photographing.

Over at the Orthodox Church the twin steeples were still standing but the interior was empty. A large cracked slab of concrete, once a roof, lay next door. Many visitors I've met have grabbed pieces of tile or glass from the doorway of the church when their government guide wasn't looking -- Golan souvenirs.

Behind barbed wire that marked the end of Syrian Quneitra was a field of high grass home to a few rusting chassis and, beyond, the hills of the Israeli Golan.

"It's all Poles over there," Aseem told us. "You know, from Poland?" Aseem was from the Golan, just north of Quneitra. He chained-smoked the entire tour but said very little, answering questions in short bursts. He didn't offer a grand Syrian narrative from the backseat of the taxi on the glories of the war and the evils of Zionist war crimes, which I had expected the guide to do. He seemed resigned.

Israel has capitalized on the rich landscape of the captured area -- wine produced in the "Israeli Golan" is shipped internationally and given as diplomatic gifts and a number of eco-lodges and hotels built around hot springs have made it one of Israel's most popular tourist areas. Cars were visible cruising along the road that hugged the hills and one could imagine talking to the other side with a megaphone, which Druze students from Damascus University do every spring, as their families remain on the Israeli side of the border.

The final stop before leaving Quneitra was a mosque and madrassa, its minaret still standing though the railings at the top were gone. I asked Aseem if it was possible to go up it. After a long stare, then frown, then smile, he waved his hands. "Go, go, but be careful." (Tour guide rates are unofficial and negotiable, amounting to a big tip for an hour's time around Quneitra. Climbing a beat-up minaret is the kind of thing for which you tip).

The stairs, which still felt sturdy, were covered with dirt, stones and garbage but as we climbed they cleared. From the top the view of Quneitra opened: other minarets that had not been spared; the collection of building skeletons that may have been the town's center nearby; the hills of occupied territory in the distance; mostly green and trees around razed concrete and modest piles of stones and former foundations.

We started snapping pictures. I made my way around the minaret until I was looking down on the taxicab and Aseem, who was smoking a cigarette by the entrance of the mosque. Seeing me with my camera, he waved the butt in his hand and let out his refrain: "No pictures up there!"