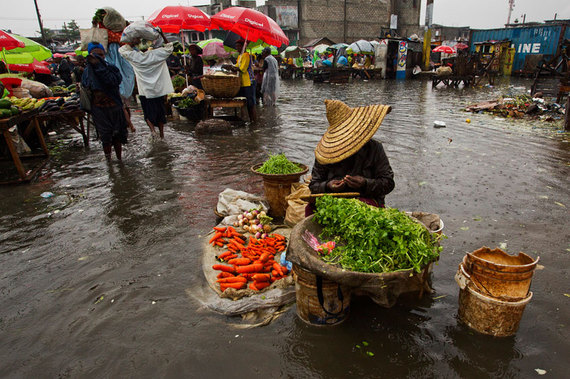 A woman sells produce at a flooded market place in Port-au-Prince after hurricane Sandy ravaged the west of Haiti. UN Photo/Logan Abassi

Globally, more than 60 million people are displaced by conflict, violence, disasters and human rights violations. This is the highest level of forced displacement since World War II.

The principle focus of this week's UN Summit on Refugees and Migrants was on the suffering endured by those who are forced from their homes by conflict. Nonetheless, it must be recognized that there is a growing problem of displacement which is not conflict related but driven by natural hazards.

Last year 19.2 million were displaced by natural hazards in 113 countries. The majority of this displacement was caused by extreme weather events due to a record number of droughts, widespread flooding and 90 major tropical storms. Much of this was fuelled by a very strong El Niño occurring in the context of climate change which threatens a further 75 million people who live just one metre above sea level.

Displacement is often an indication of the breakdown of normal coping strategies when resilience is undermined by a severe disaster event. Almost three million people remain in temporary accommodation in Nepal, over a year after an earthquake which killed more than 8,000 people in a country which is still recovering from long years of conflict.

People are on the move across southern Africa as a result of a prolonged agricultural drought in a region where the resources for conserving water, and thereby reducing disaster risk, are very limited.

It will be impossible to reach the World Humanitarian Summit goal of halving the current record numbers of internally displaced by 2030 without a shift from managing disasters to managing disaster risk as advocated for in the Sendai Framework for Disaster Risk Reduction adopted by UN member states last year.

Bringing down disaster losses and achieving substantial reductions in the numbers of people affected by disasters is an important part of the solution to reducing involuntary flows of migrants and refugees and this will be a key consideration as the process gets underway to formulate a Global Compact on Migration by 2018, a Summit outcome which IOM considers "a defining moment for human mobility."

If we are to mitigate the possibility of today's disaster displaced becoming tomorrow's cross border migrants and refugees, then strategic investments must be made in disaster risk management in a world where extreme weather events are impacting on people's livelihoods in new and fundamental ways.

Among the actions required are greater investment in disaster risk reduction in low and middle income countries with little capacity to reduce the impacts of recurring disaster events such as floods and droughts which, over time, degrade people's resilience and ability to meet the basic needs of their families.

Only 40 cents of every US$100 spent on aid goes towards measures which would reduce the future likelihood of displacement, often from events which are predictable and recur frequently.

Migrants and refugees themselves are particularly vulnerable in case of disasters given their limited access to risk and prevention information as they may not master the language of the State in which they are displaced, nor be familiar with cultural practices, nor be aware of natural or technological risks known to other population groups;

There are affordable low cost solutions to avoiding people losing their homes in disasters. Careful land use planning, strengthened tenure and protection for vulnerable groups, including women and girls, elderly persons, persons living with disabilities and indigenous people, along with support for broader strategies to reduce poverty and increase resilience, are important for reducing displacement and migration.

The UN Summit is a potential turning point for raising political commitment to addressing the needs of refugees and migrants and also encouraging strategic thinking on how to address the underlying drivers behind these unprecedented population movements whether they are driven by conflict, violence, human rights violations or disasters.