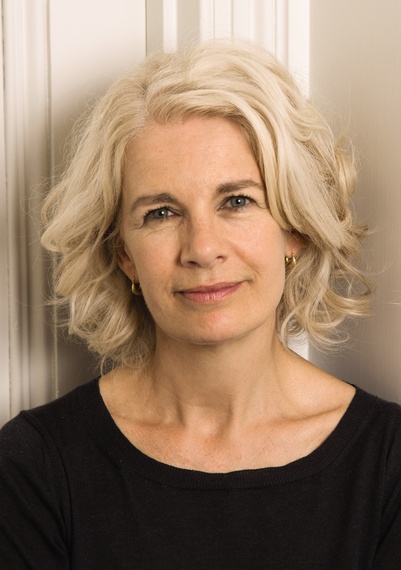 Renee Knight worked for the BBC directing arts documentaries before turning to writing. She has had television and film scripts commissioned by the BBC, Channel Four, and Capital Films In April 2013, she graduated from Faber Academy, a school sponsored by the eponymous British publisher, and known for nurturing breakthrough talent. Its alumni include S.J. Watson. Disclaimer is Renee's first novel.

Disclaimer has a unique premise. Catherine, a successful documentary film-maker, receives a book entitled The Perfect Stranger. Turning the pages, she's horrified to read about a day in her own life that occurred 20 years earlier, one she's tried to forget. Intertwined with Catherine's narrative is that of Stephen Brigstocke, an older, grieving widower who discovered among his late wife's possessions, a manuscript that horrifies him. He has it bound into a book, and sends it to Catherine. The book contains details of her most closely guarded, terrible secret, one she's kept hidden from her husband and son all these years. The only other person who knows what really happened, is dead; but The Perfect Stranger suggests Catherine's secret is not buried with him.

Disclaimer has a unique concept. Can you articulate how it came to you?
I'd written an unpublished novel before this one. There was an event in my adolescence involving an old friend with whom I've maintained a friendship over the years. In that first book, I touched on that event, and when the manuscript was completed, it struck me my friend would recognize herself. So, I sent it to her before sending it off to my agent. While waiting to hear back from my friend, I was anxious about it, not wanting to hurt her. I kept thinking about it and the premise stayed with me: Wouldn't it be shocking if you came across yourself in a book without any warning? One of my favorite things is going to bed at night with a good book--a time when you feel secure yet are at your most vulnerable. When I was waiting to hear back from my friend, the idea for this novel became embedded in my mind. My friend felt fine about my writing of her minor incident. As it turned out, the book wasn't published, but the situation gave me the idea for this one.

What made you decide to use the present tense throughout major portions of the novel?
One character's story takes place two years before the present time and I thought the present tense would provide immediacy for the reader. I kept thinking how I would feel if I were sitting in bed and came across a book about me. I tried writing in the past tense, but using the present tense seemed to fit better.

Disclaimer contains portions of The Perfect Stranger within it. In a sense, the novel-within-the novel becomes a character as well. Was that your intention?
Yes, in a way, it was. The book-within-a-book was the "missing" character. It's the witness to an event. I found that element--the prose of The Perfect Stranger--the most straightforward to write.

In Disclaimer, you capture so very well the day-to-day life and feelings of people, both in the past and present times. Are there any novelists who've influenced you?
I think every book I've read has left its mark in some way. You can't help but be influenced by what you read. There are writers who've had a direct impact on me. I particularly love the work of Lionel Shriver. I love reading Philip Roth, but I wouldn't say he influenced my writing. I appreciate the honesty in other writers; actually, a fearlessness that's apparent when people write.

One of the characters has "reinvented" the past and is therefore an unreliable narrator. Will you talk about that?
We all look at other people and often see them differently. You can have an unreliable narrator who isn't necessarily knowingly being unreliable. I think in some sense, we're all unreliable observers and narrators. There are only certain aspects of the truth we can manage, so we're all guilty of finessing reality and of putting things into manageable, bite-sized pieces we can live with and contain. So yes, one character in the book is an unreliable narrator, but we only discover that later on. I think it's an aspect of how people layer themselves; it's how we protect and insulate ourselves from the secrets we harbor.

What was the transition like going from documentary film-making to penning a novel?
The film-making was some time ago. My children are teenagers and I stopped working in television when they were quite young. When they were older, I didn't think I could go back to television. I'd been away from it for a long time and lost the appetite for it. That's when I started writing. So there was a bridge between the television and novel writing. In between, I tried script writing. It felt closer to what I'd been doing, namely documentaries. I then wrote some short stories, and eventually got into that first novel. The novelistic form seems to come more naturally for me than screenwriting.

What are the differences for you between script-writing and novels?
What I love about novel-writing is the interiority of it. I love really being able to get into a character's head. I think skilled directors can do that in film, but I have much more freedom saying what I want to in prose than I would in film.

Speaking of film and prose, I understand the film rights to Disclaimer have been sold to 20th Century Fox. How do you think it will translate into another medium?
Having said what I just did about script-writing, I am, in fact, adapting the novel into film form. I think it could work very well because it's relatively small scale. The challenge is in dealing with the time shifts--the flashbacks--but I think the script's addressing that problem.

I envision it having voice-overs.
Yes. I think there will be some voice-overs which were frowned on ten or fifteen years ago. But, they seem to be coming back. They can work well so long as the voice-over stands up on its own; if it's knitted into the film.

What's coming next for Renee Knight?
I'll be doing that scary second novel because it was a two-book deal. I do have an idea for it.

Will you share something about it with us?
I won't go into it too deeply only because I'm nervous about talking myself out if it. I've got two characters in my head. It's not a familial relationship so it wouldn't fall under the domestic noir label. It looks at themes such as extreme loyalty and the question of how far you would go for someone else. It will be another psychological thriller.

Congratulations on writing Disclaimer, a deeply probing, intense psychological thriller that was gripping and very difficult to put down.