This mollusk sure knows how to groove. The flashy 'disco clam,' shown in the video above, earned its name from the light show produced by reflective cells on the edge of its mantle. Why would a clam light up in this way? Biologists aren't sure, but they have a few hypotheses.

"Light is often used to attract prey items," UC Berkeley graduate student Lindsey Dougherty told The Huffington Post. "A lot of small prey items are phototaxic, so they’re attracted to light. Even though [clams] are filter feeders, they may be enticing prey."

Another possibility, Dougherty said, is that the light display may serve as a warning to predators. "But we don’t know yet whether the clams are actually toxic," she added.

"A third idea is the clams might be protandrous hermaphrodites, meaning they start out as small males and mature into large females, but we have yet to confirm this," she said. "So we think that light may be used to attract small juvenile males for settlement." 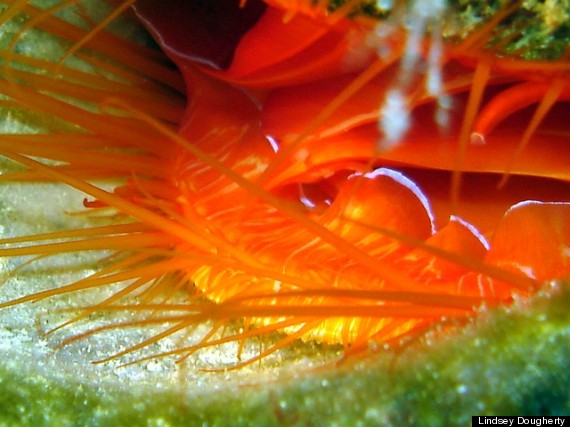 A close look at the disco clam.

"I first saw one in Wakatobi, Indonesia, and my sister and I were making disco moves underwater for the rest of the dive, we were so excited," Dougherty said. "I am fascinated by how such a specialized display might have evolved, and at the amount of energy that went into producing such unique structures and tissue movement."