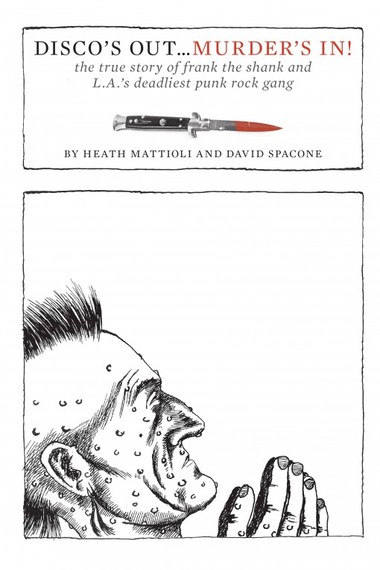 It's easy to forget these days that punk used to be scary. It's true. Punk's original nihilism freaked out everyone from the squares to the hippies. Over time, some of that nihilism has been whitewashed with revisionist histories, rendering something more PC for TV. Nowadays, the punk and post-punk dialects are sanitized for advertising, as Generation-X mellows and looks back with at its cultural and political contributions. This looking back is reminiscent of the baby boomer's 1960's fixation and that awfully smug term, "The Greatest Generation" to describe the children of the Depression.

Disco's Out... Murder's In tells the story about the ultraviolet punk gang member, Frank The Shank. Frank was the underboss of Los Angeles's La Mirada Punks (LMP). The story investigates the lives of Frank and his friends as they go to shows, pick fights, stab people, fuck gang groupies, hustle money, and get high on whatever is available. As far as the authors or myself know, this is the only book on the L.A. punk gangs.

I spoke with Disco's Out authors Heath Mattioli and David Spacone. Mr. Mattioli told me, "It's really one kid's journey through L.A. 80's punk rock and getting swept up in the dark side of it."

Despite the violent subject matter, a compelling aspect of this book is the cinematic narrative that the authors were able to construct. Frank was able to recall the subtleties of one particular relationship, enabling the authors to even craft a love interest for the Shank. Frank the Shank grows in human complexity throughout the story.

I'm not sure Frank the Shank actually knows how many people he killed. Many of the names have been changed to "protect the guilty". I saw a lot of pictures of him in the book. I wondered if there was any concern about his real identity or of opening cold cases?

According to Mr. Spacone, "No and yes. (Laughs) It's by no means a confession. A confession is a formal thing. There needs to be a policeman present, lawyers being Mirandized, and such. Now can someone start digging through this stuff? Of course." Mr. Mattioli added, "Yeah, they could easily drag in Frank or anyone else in the gang in for questioning and they are aware of that. You have to confess in a municipal building with a court appointed attorney and what not."

Even with two authors, the narrative is coherent and it sounds like a single voice. I suppose it's not unlike making a film, which is clearly a collaborative effort. In addition to trying to figure out how they were able to create that single voice, many questions about the narrative emerged. I became curious about how much access Frank gave to Heath and David. It turns out Frank was working as a gravedigger and would meet the authors for early morning or late night sessions where he would reveal things. I asked the authors about the process of interviewing Frank. Mr. Mattioli said, "He changed as a person in this process. That's another story, as well. He's a very interesting guy. Halfway through [the process] he started digging graves in a cemetery. Then he got a job as a janitor and a night watch at a Christian College. It doesn't matter what his job was; the hours were the same- it was a graveyard thing. If it wasn't late at night, it was early in the morning. Talking with a guy who's getting his second wind because he was excited to tell the story."

Disco's Out is addictively readable and keeps pace with best records of the genre. I should also mention here that it has a great drawing by Raymond Pettibon on the cover. What we have here is a book that can sit alongside the other volumes on West Coast punk, such as Marc Spitz's We Got the Neutron Bomb, Brendan Mullens's Lexicon Devil: The Fast Times and Short Life of Darby Crash, and Allan MacDonell's Punk Elegies . I find it interesting that as punk got older, publishing exploded and this music turned into the most documented of all subcultures.

When you first hear hardcore punk, the dangerous allure of violence is almost as attractive as the primal call of the music. In the 1980's, there were groups of young people who took that musical dissonance of punk and personified it as punk rock thugs. As a kid, I remember gang violence in the news during the 1980's around when those cautionary labels started appearing on all the good records. This was a time when some of the best youth music became politicized in all popular genres. In the case of the 1980's L.A. punk gangs, politics is often an excuse to just fuck shit up.

You can get it here on Feral House.