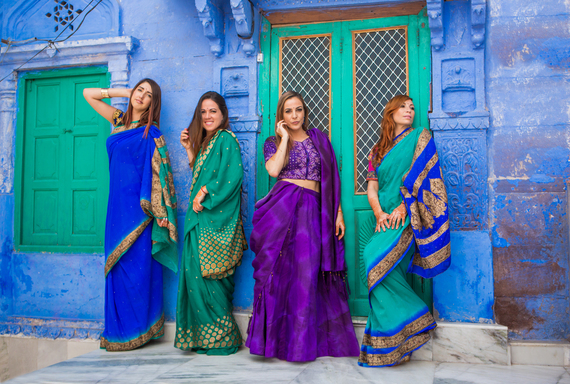 One of the reasons I love going to India is because it's a photographer's paradise. All of the colors, textures, architecture and people are just some of the many reasons why India is a photo op on every corner. I swear even the way that people languidly sit on their front steps is better than any professional model can pose. Even a woman sweeping up her trash is wearing a colorful sari and looks stunning.

At times, it feels like you are driving through a Hollywood set while you sit in your tuk tuk zooming through the crowded streets, horns blaring to avoid hitting cows, dogs, and street vendors. It's a cacophony of sounds, smells and chaos, but somehow it all works. 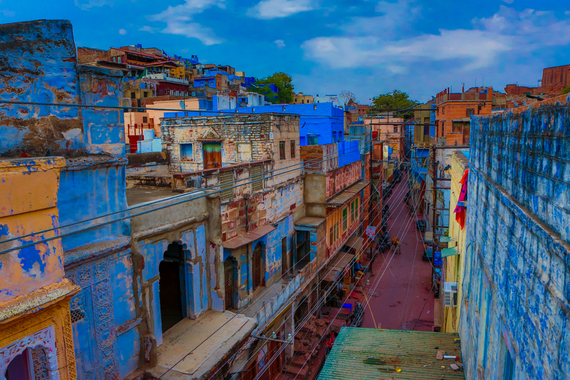 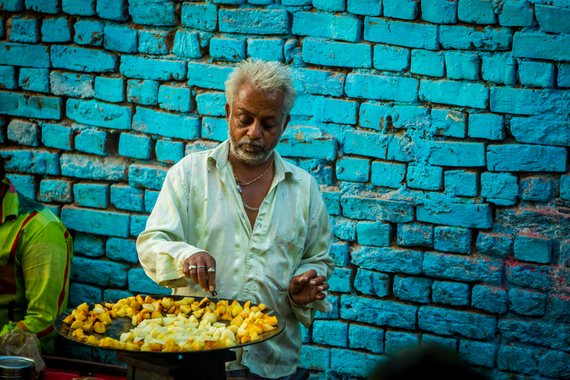 I was coming to India to shoot the famous Holi festival where people throw colored pigment at each other and I was told that I had to visit Jodhpur, the Blue city, if I really wanted to experience color. I have been to Jaipur, the pink city, and heard about Jaisalmer the golden city, but after googling Jodhpur I was obsessed with going there. 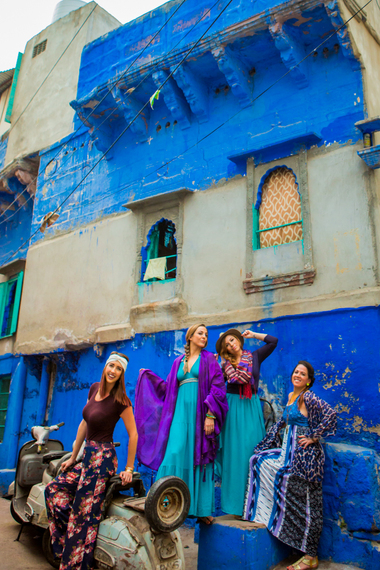 My three girlfriends, Jodee, Sarah and Shannon, who are also fellow photographers, came with me and in true fashion we always pack and plan out our outfits accordingly to match our environment. It sounds ridiculous, but when every photo you take or are in is technically a professional photo shoot, it helps to be prepared. We each brought blue dresses, bought jewel toned saris, and I even packed a pair of contrasting yellow pants to wear so my tourist photos looked good. 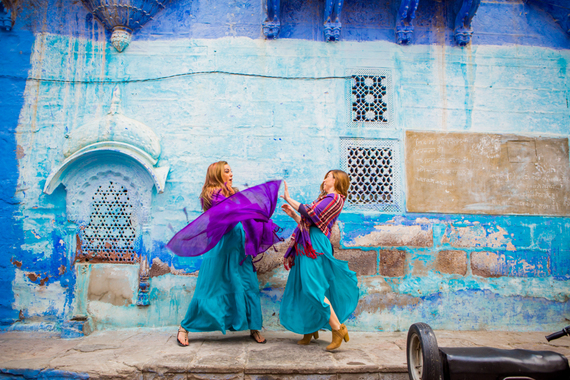 When we first landed, Jodee, Shannon, Sarah and I grabbed our bags and tried to jump in a taxi to our hotel, but we were quickly denied and told it was impossible for a regular car to get to our hotel in the old part of the city. We soon understood why after being thrown into 3 tuk tuks with all of our bags and found ourselves zooming through the windy, narrow medieval passageways they call the Old City.

The buildings are mostly blue with a huge mountain of stone crowned with a large fortress called Mehrangarh Fort towering over the skyline. The cliffs were cut so they are smooth, vertical and unclimbable making the fort appear as though it is carved directly into the mountaintop. We zoomed through blue alleyways until we ended up at Rani Mahal Hotel in the heart of the old city almost directly beneath the fort. 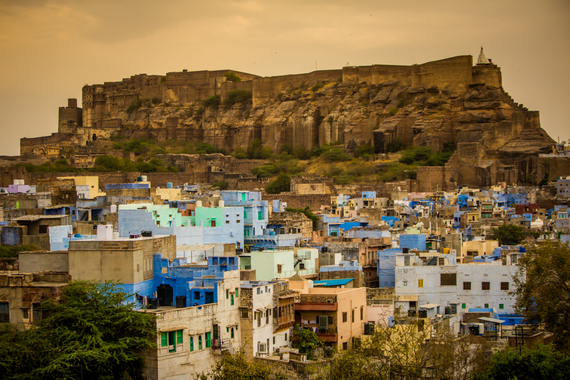 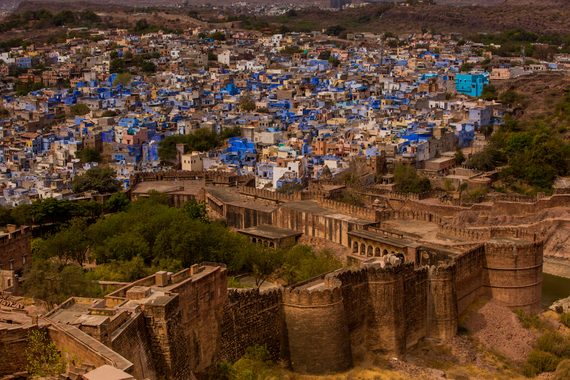 When you first walk into Rani Mahal it looks like an ancient castle with carved stone walls and a tall courtyard in the middle. The rooftop is painted the famous blue color of Jodhpur and you have an incredible view of Mehrangarh Fort towering over the city just above you. The walled-in fort used to be the Maharajah's palace and the original city was protected within its walls, but then the old city grew outside of the walls and a second wall was built outside of the old city. It's a magical labyrinth of turquoise and we quickly learned that in order to find the famous blue houses, you have to go hunt for them on foot. 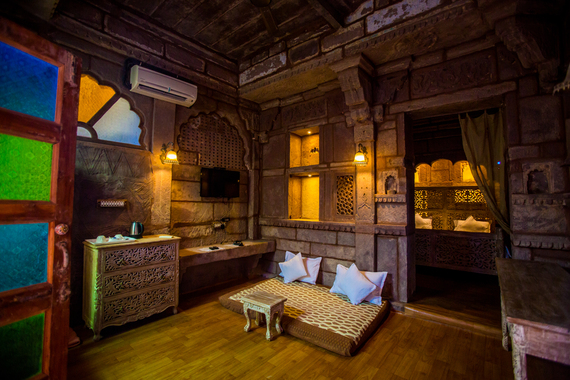 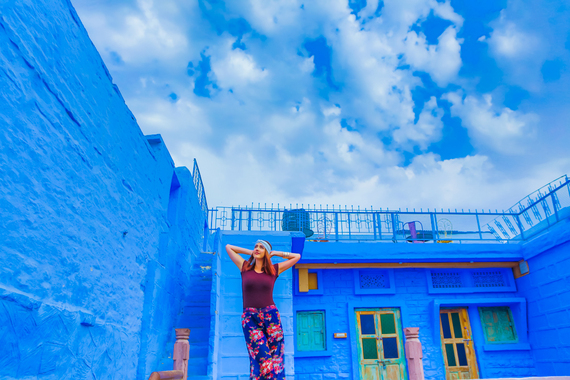 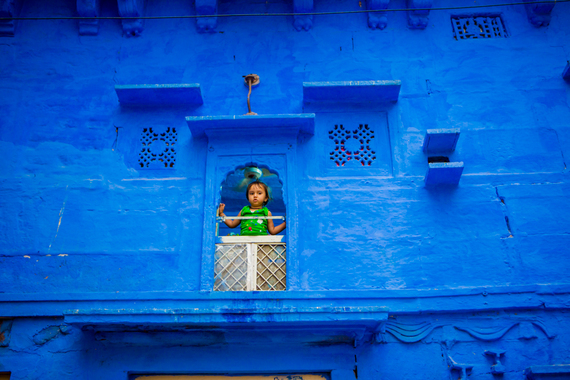 We hired our guide, Ram, to walk around with us and help us find the blue houses. It was definitely the way to go, because not only did we have an English speaking historical guide, but we had a built in security guard and photographer to take photos of us all together for a change. Ram walked us through the narrow streets and even took us inside some of the local houses and rooftops. We all planned out wearing blue on our walking tour to match the houses in our photographs and we were having blue colorgasms everywhere. I couldn't stop taking photos! 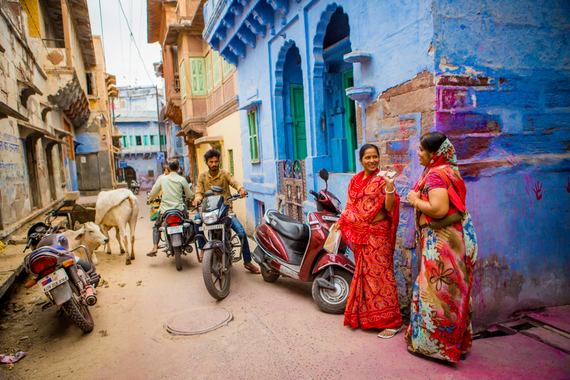 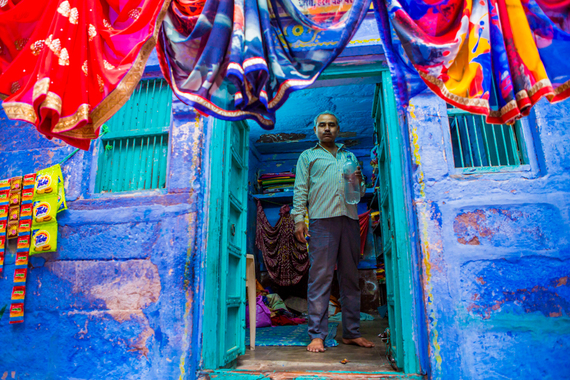 Ram continued to lead us up the hill to the main gate of Mehrangarh Fort where we had chai tea and samosas and learned the history of the city. The castle is almost 1000 years old and is still an architectural wonder. I didn't realize that Jodhpur is actually a blazing hot desert yet the fort was built in a way where the walkways are shaded and create a constant wind tunnel breeze. I was obsessed with the mosaic glass and mirrored ceilings and walls and all of the ornate, scalloped windows and archways, but the one thing that really piqued my curiosity was a small opening in the floor of the main courtyard which is now locked with a gate. 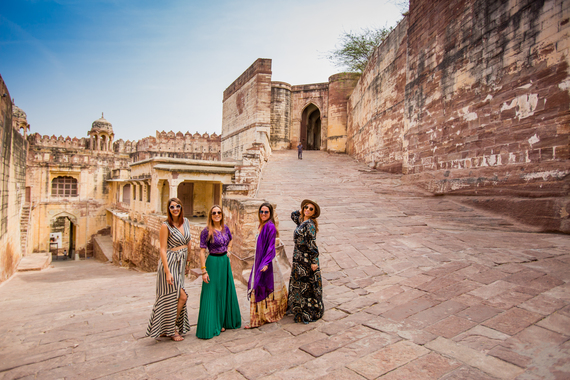 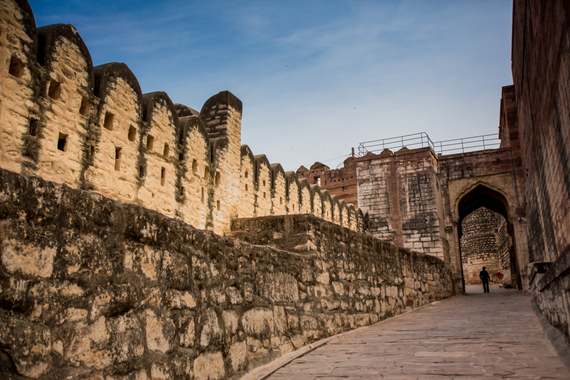 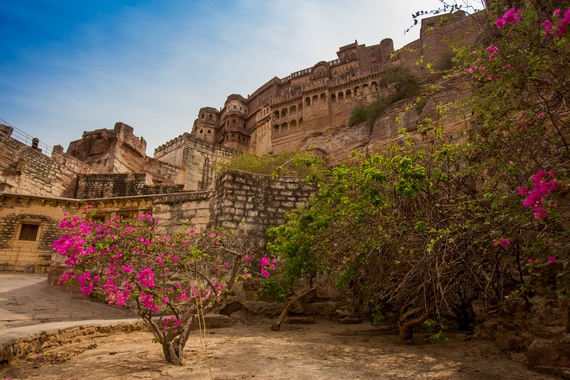 Ram explained that this tunnel was a secret passageway leading from the castle to a house somewhere in the old city. It was meant for women and children to escape if the fort was ever under siege, but mainly it was a secret tunnel that allowed the Maharaja to do secret spy missions, where he could sneak into the city unnoticed as a commoner. This fun fact completely intrigued me, because I have always had a fascination with secret passageways and finding buried treasure and my mind started racing as I pictured what this house must have looked like and who had lived there and how was the tunnel kept a secret? 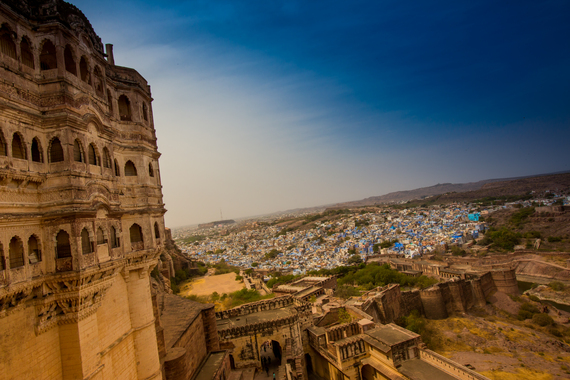 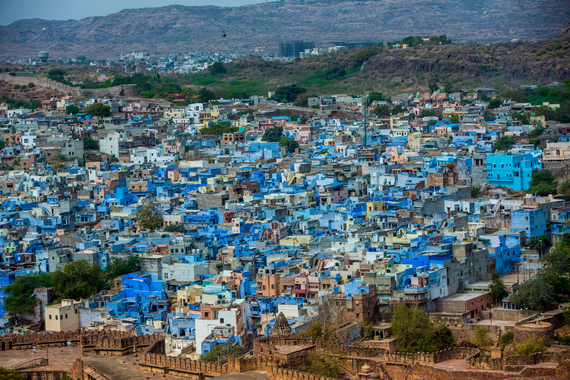 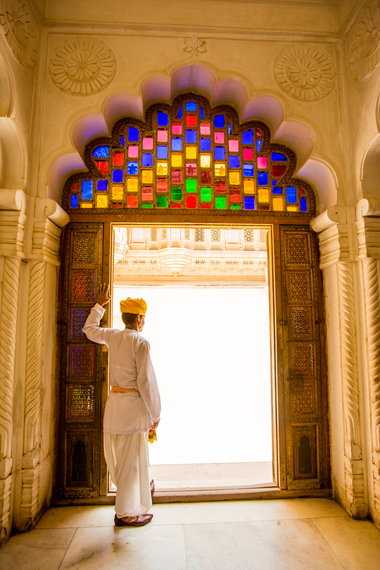 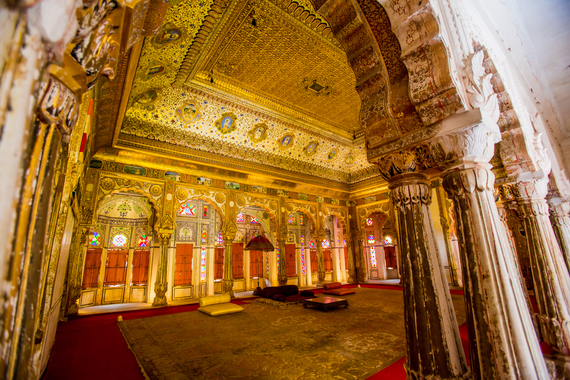 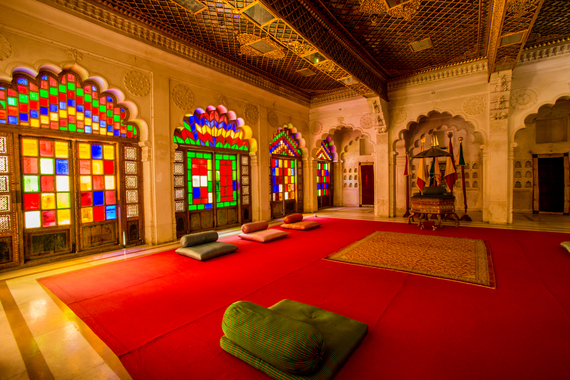 In Jodhpur there are three must-see buildings, Mehrangarh fort, Jaswant Thada (the present day tombs for the royal family), and the Umaid Bhawan palace. They are not hard to miss since they are the only three buildings that tower over the skyline of the city. The tomb where all of the Maharajahs have been buried lies at the bottom of the hill less than 1km away from the fort. Although it is set against the backdrop of arid hillsides and surrounded by the city's medieval stone wall, it is like a small oasis with a lake and gardens. It was a calm and quiet place of zen within the chaos and honking of the streets.

Shannon and I ducked into a small room off of the main garden for a private, guided meditation and it was amazing how you can learn to quiet the mind. Our guru had us separate the different sounds around us from the people talking, to the birds, to the music, to our breathing, like separating out the strings from the percussion in an orchestra and by doing that you could shift your focus and quiet the mind. It was quite amazing to hear the world as layers of sound and it makes sense why yoga and meditation were born in a country like India. 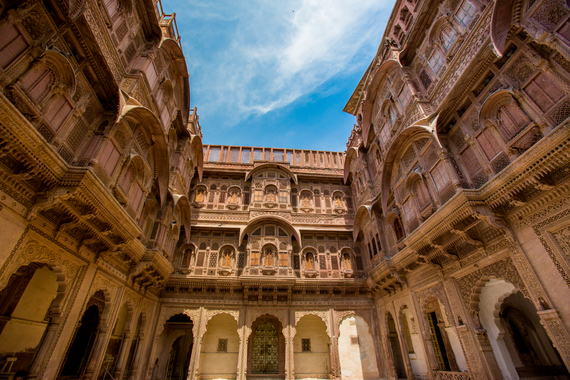 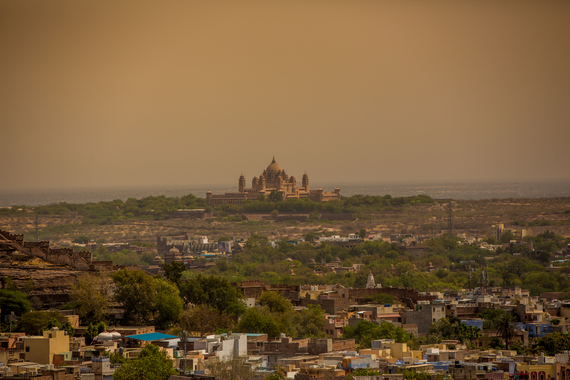 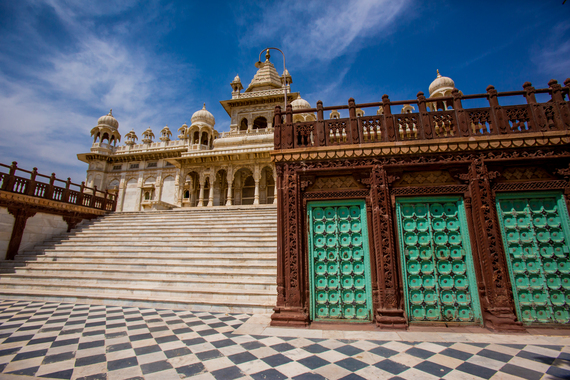 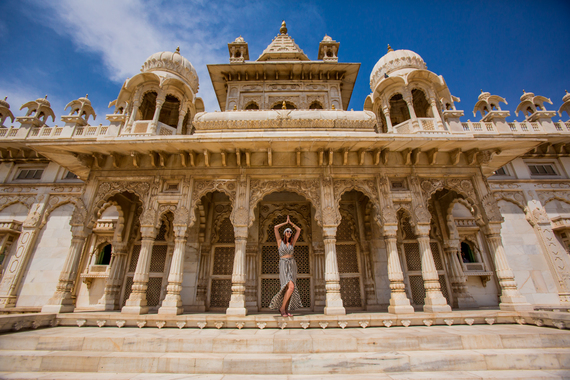 Another oasis in the city was our afternoon routine of coming back to Rani Mahal and having tea and a nap. Each room has a sitting room with a mattress and pillows on the ground, perfect for receiving guests and just relaxing. We ended up adopting the Indian habit of napping during the hot part of the day, because we were up early and eating dinner late. The city becomes alive at night with bustling markets and perfect temperatures. During the day, temperatures can be in the 100's, but at night it's a cool 70 degrees. I found myself taking advantage of the 12 hour time difference between where I was and my home in Los Angeles.

During the day I was not bothered by emails since it was the middle of the night at home. Every night after dinner, the girls and I would put on pajamas and sit in the courtyard checking our emails and work over tea. It's a family run hotel and the couple that owns it are there running it, helping us to find a masseuse or a guide or anything you could possibly want. Even their daughter was there and painted henna on our hands. We felt so comfortable to be in our pajamas there like we were in our own home. 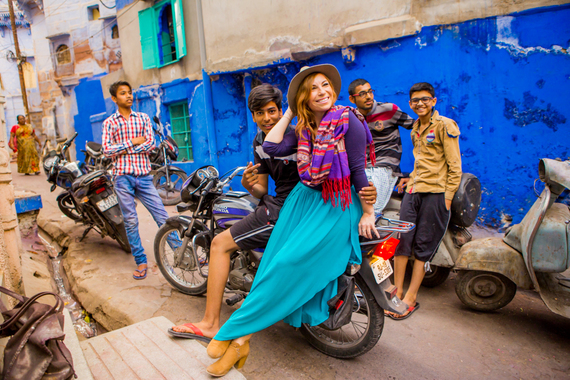 India is a very special, spiritual place so it was no surprise that on our last night there a bit of magic happened at Rani Mahal. I was sitting checking emails in the courtyard and I saw that the couch was blocking a door in the stone wall. The owner told me she had just purchased this hotel within the last year and that she felt blessed by God to have this property. She then told me that the door I was sitting in front of was THE door to the secret passageway that led inside of Mehrangarh fort!! My mind was blown! What are the odds that I would find the other side of that passageway when no one, even the guides, knew where it was? 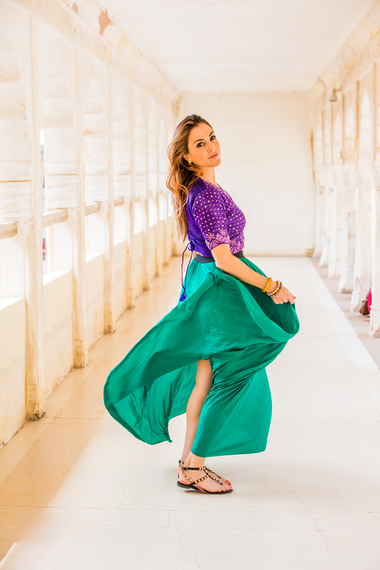 I felt like it was an omen that I was supposed to be exactly where I was in that moment. As I looked around and tried to the imagine kings of the past 1000 years sneaking through that door on espionage missions I realized there is so much that we will never know and so much wonder around us if we just pay attention.