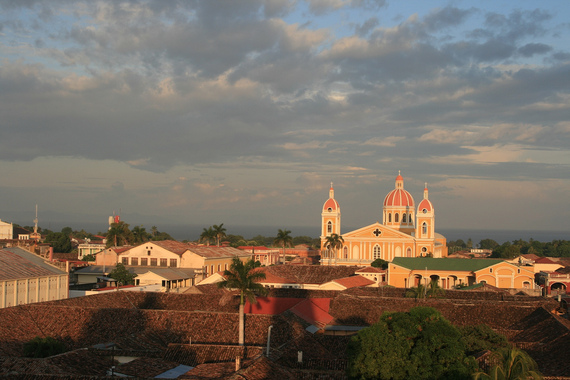 I returned to Nicaragua recently for the first time in more than five years. I didn't choose to stay away so long. Circumstances and schedules kept me absent. Nicaragua is one of the places I daydream about regularly, one of the countries I feel most connected to.

Returning to a place you love after an unavoidable hiatus, you resent the changes since you were there last and you delight in all the things that are just the same.

Back in Nicaragua a few weeks ago, I found, with relief, that this is still the place I remember. There are changes, sure, but not so many that you can't ignore them if you're so inclined.

Traveling around, I couldn't help but draw comparisons between this country and the one I currently call home, Panama. Granada, Nicaragua, where I was based for this visit, and Panama City, Panama, couldn't be more different. From the morning I arrived in Nicaragua, I tried to put my finger on why that is (beyond the obvious). Finally, the gentleman who collected me at the airport in Managua and delivered me to my hotel in Granada articulated the heart of things for me.

"Panama City is booming," I was explaining after he'd asked how I was enjoying life in my adopted home town.

"There's so much energy and activity, so many people and so much money flowing through that place right now," I continued, "thanks, largely, to all the public works projects in progress, including the expansion of the Panama Canal.

"Panama City," I said, "is in your face. Downtown is noisy, dirty, frenzied, and completely alive. This is an exciting time in the history of Panama, and I'm enjoying the chance to witness it from the inside.

"Is swinging contentedly in its hammock," my new friend completed the thought for me.

And he got it just right. While Panama is busy remaking itself, retooling for a decade of further and continued growth, development, and expansion, Nicaragua is happy to sit back and enjoy the sunshine.

Nicaragua has enjoyed some improvements since my last visit. The international airport in Managua has been expanded and improved. A new bypass takes trucks around Masaya instead of through it. The coastal road is less potholed than I remembered. Many more houses and condos have been built overlooking the bay at San Juan del Sur, including some I toured that qualify as luxury standard. This town is way more up-market than when I last visited.

Overall, though, Nicaragua remains poor. But the Nicaraguans, they're still smiling. These people have a resilience and a determination that keeps them looking and moving forward with a positive attitude, despite their recent century of struggle. Traveling around the country, you see them herding their cattle, tending their sugar cane, and rocking slowly in their big wicker chairs. They seem in no hurry to get anywhere or to do anything in particular, and, watching them, you begin to wonder why you are.

The price of oil, the price of gold, the closing figure for the Dow...these things all seem far away and unimportant when you wander the roads of this beautiful but usually overlooked country. Don't these people know that these are unbelievably volatile times financially, politically, and otherwise? Economies are collapsing. Foreign nations are grabbing power. If the Nicaraguans are aware, they're unaffected. And, again, spending time among them, you can't help but wonder if they don't know something you don't.

Nicaragua's crown jewel is the colonial city of Granada, which vies with Nicaragua's other colonial city, Leon, for the title of oldest city in the Americas. Granada may or may not, depending which side of this debate you come down on, be the oldest city in region, but, for my money, it's definitely the most romantic. I'd even go so far as to call it the Paris of Central America. 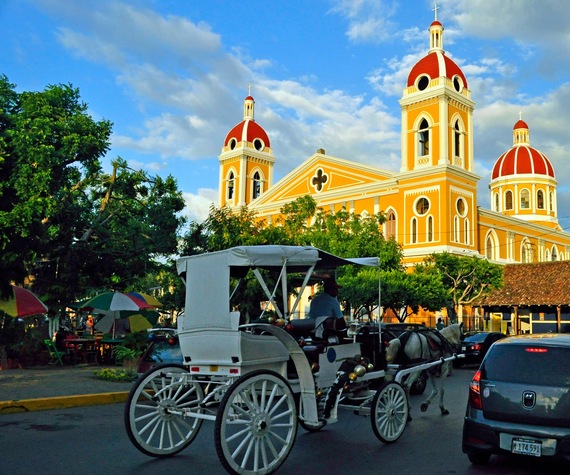 Nobody's mistaking Nicaragua for France. There are no high-speed trains (or trains of any description). No opera. No Seine. No Louvre. And Nicaragua's is not the world's best health care (though the Vivan Pellas hospital in Managua is one of the best in the region).

Granada, however, does have a lake, at the end of what is now a stone-paved thoroughfare lined with shops and cafes with tables and chairs out front where you can enjoy a glass of late-afternoon wine. There are small art galleries, souvenir hawkers, and lots of tourists.

Walking across town, you're struck by the timeless beauty of this place and of how the light, changing as the day progresses, recasts everything it touches. The yellow and white cathedrals are bold and bright in the morning sun, inky and shadowed in the moonlight. Against the backdrop of Granada's brilliant sky, too, are the red-tiled roofs, the bell towers, and the long, wide Xalteva boulevard.

Paris is special because you need only, at any moment, step outside your door to be treated to delightful sounds, sights, and smells and to pass impressive architecture, well-tended parks, and tempting window displays.

Just like in Granada. Step out onto any street, at any time of day, and something interesting is going on. There's something pleasing to look at, something tempting you to linger and to investigate.

Paris is special because it's a city made for walking. A car is a liability. And why would you want to drive anyway? You'd miss the chance to be part of Paris street life.

Granada, Nicaragua, is Paris, France, without the twice-daily street-cleaning and the every-10-years mandatory building facade refurbishment.

What about more practical matters to do with spending time in Nicaragua?

During my recent visit, I took taxis, ate out, enjoyed my share of the local Flor de Cana rum, and made a point of stopping in shops as often as I could. Everything from shampoo, bottled water, and pineapples to electronics, duffle bags, and washing machines is a global bargain.

Breakfast for two at my favorite spot on Granada's central square, the Alhambra Hotel, was so cheap I re-checked the bill. Two plates of eggs, bacon, and toast, plus orange juice and hot tea, for about $6, including tax and tip. In Paris, you can't buy two croissants and coffees for $6, and, in Panama, for 6 bucks, you and your dining companion are eating empanadas out of a cart.

Nicaragua remains the kind of place where everything is so affordable you never have to tell yourself no. Want to dine out? Enjoy late-afternoon aperitifs on the square? Drink and dance 'til dawn? Take a taxi to Masaya or Catarina for a day at the market? Take a boat tour on the lake? No problem. You can indulge your whims without giving them a second thought.

Nicaragua is a country of lakes, volcanos, crashing Pacific surf, and historic colonial cities that begs you to stick around a while to discover it. So do. Your budget, even if slight, can handle it.