Throughout my entire life, I have always been surrounded by others who share my Muslim faith: my very large Indian family, my friends from Connecticut, the thriving Muslim population at Georgetown and around Washington, D.C. For this reason, the biggest challenge for me while studying abroad in Rio de Janeiro since January has been, without a doubt, the lack of a Muslim community. Given that about 0.02 percent of Brazil's population identifies as Muslim and that the majority of this small group lives in the center of the country, I never would have expected to find other Muslims in Rio. However, after several months of searching I finally found some at a masjid-cum-community center in Tijuca, a northern district of the city.

I discovered the center, called the Sociedade Beneficente Muçulmana (Society for the Benefit of Muslims) partially by chance. After searching "Mosques in Brazil" and other variations online, I found a phone number and email contact. Unfortunately, both of these were several years out-of-date, and none of my Brazilian friends (none of whom are Muslim) had any ideas, either. The website did have an address, so I decided to make the one-hour bus journey there from my residence and hopefully, uncover more information. I arrived to find a dilapidated building undergoing heavy construction, and a notice from the Society's leader dated from 2009 that the masjid would be closed indefinitely. Frustrated, I wrote about my disappointment with the masjid's outdated contact information on my study abroad blog and gave up any hope of finding a Muslim community in Rio de Janeiro.

However, I was extremely fortunate when my professor's Brazilian students, interested in learning about the perspectives of foreigners in Brazil, happened upon my blog. One of them immediately contacted me and said that the masjid was not permanently closed; in fact, it opened once a week on Fridays for congregational prayers (called Jummah, which literally means "gathering together" in Arabic). I was thoroughly excited; not only could I actually attend Jummah services again (which are considered a requirement for practicing Muslims), but I would have the unique opportunity to observe how Islam is practiced in a completely different environment.

On April 5, I journeyed to the Society's address once again, and was amazed to find a small but close-knit community of Muslims. I was immediately struck by the room's diversity; there were other North American Muslims, recent immigrants from Africa, exchange students from all over the world, and recent Brazilian converts to Islam. I even talked in Urdu, one of my native languages, with some professionals of Indian ancestry who were born in Mozambique! One of cariocas' (Rio residents) defining characteristics is their friendliness and positive attitude. I greatly enjoyed chatting with other Muslims and learning more about the community center, the diversity of people, and their activities. In this way, the Muslim community of Rio exemplifies one of Islam's core features, which is a celebration of and appreciation for diversity. The Quran states, "And among [Allah's] signs is ... diversity in [mankind's] languages and colors," and that "[Allah] has created mankind into nations and tribes so that we would come to know one another." 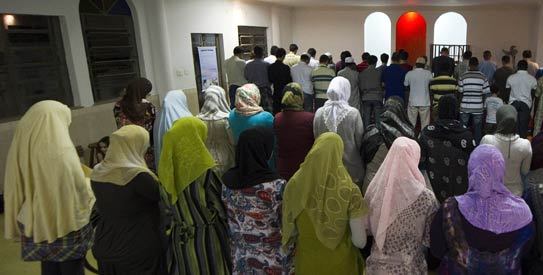 Since Islam is so diverse, different regions of the world often have different methods of practicing the religion. Indeed, there are five common juristic schools of Islam, four within the Sunni branch and one within the Shia branch. For this reason, before the prayer service commenced I planned on observing other people and following their actions in order to avoid feeling out-of-place. However, I was very surprised by how similar the Jummah service was to the prayers in the United States. It followed the same methodical pattern: the adhan (call to prayer), a few minutes of solitary prayers, the imam's sermon, a period of du'a (supplication), a full congregational prayer, and lastly, announcements from members of the community. Participating in this service therefore was extremely comforting, as it reminded me of the Jummah prayers that I consistently attended while in the USA.

Going forward, I am enthusiastic to become more involved with the Society. Since it took me nearly three months to find other Muslims in Brazil, I have exchanged contact information with too many people to count, and plan to attend many community events at the masjid. I never fully believed the negative stereotypes of Rio de Janeiro, but discovering the Sociedade Beneficente Muçulmana and getting to know other Muslims has really showed me the incalculable diversity of the city, and of Brazil.

This post originally appeared on Berkley Center for Religion, Peace, and World Affairs.