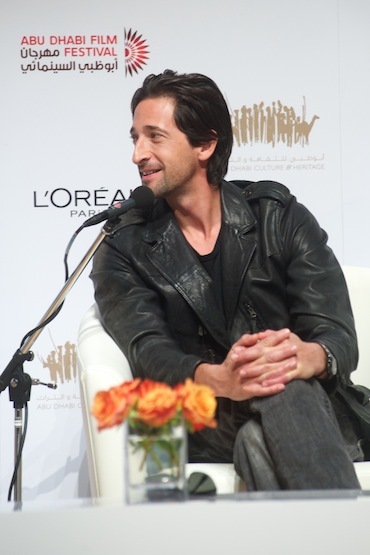 Acting teacher Richard Pinter would say to his students that a great actor, even a fascinating human being for that matter, should be unpredictable. And no one represents that complete statement as much as Adrien Brody. He's elegant, handsome, with a sultry voice that reaches deep into one's soul and his wonderfully Bohemian background is the stuff stars, great shining-extra-bright movie stars, are made of. It should be every reporter's dream to interview this magnificently complex individual, and if it isn't, well there's something wrong with them.

So, when I heard I was going to get a one-on-one with Brody in Cannes, this past May, to talk about his upcoming project Emperor, I was ecstatic. What I didn't expect was even more wonder, because along with Brody, I got to interview the film's director Lee Tamahori, and talk about fascinating men... The extraordinary duo could have been too much to handle but actually turned out to be such great fans of each other, the interview felt more like a diplomatic meet-up to help save the world, than one of those typically superficial talks about movies to feed the gossip pages. Then again, I knew I could get to the heart of the matter with the help of Brody and Tamahori, and that we did.

Emperor is a film based on a specific moment in time for Charles the Fifth, who was himself quite a special man. Marcantonio Contarini said in 1536, that Charles was "not greedy of territory, but most greedy of peace and quiet." When I tell Brody the quote he quickly comes back with a "was that his publicist who put that out there?" I see the irony, for here was a man best known for conquering, killing, fighting and who even deposed his mother Joanna by having her declared crazy. The legend of "Juana la Loca" is a well known tale in Naples, Italy, where my mother is from and where word is the overthrown Queen's ghost roams about a castle on the coast.

Perhaps the quote explains Tamahori's unusual choice of Brody to play a man with a pathological overbite and a dire dislike of the printing press, Luther and his disciples. In fact, my "peace and quiet" quote urges Brody to ask, facetiously, "is that why you cast me Lee? You know that about me?" and Tamahori to protest, laughingly, "yeah, because that doesn't sound like our guy at all!"

But the funny line once again belongs to Brody, who seems to listen and ponder while we chatter, but then slams us both with this statement about his character, "he really wants to conquer all of America because he wants to make it a quieter place. He likes peace and quiet but he rolls with an entourage of 2,000. And lives in the great outdoors and loves battle. Definitely..."

When I interject to point out that Charles did end up spending his last days in a monastery, Tamahori explains, "we don't want to deal with that aspect of his "career"... We're dealing with a moment in time when he's at the peak of his prowess, physically and has extended as far as he could. It's true he became quite embittered later in life and handed over the throne to his son, but we don't want to deal with that." When I ask why not, he further indulges me, "that's a different character and almost a different film. Otherwise you're doing one of those giant lapses where we have to make Adrien 25/30 years older and put wrinkles on his face with prosthetics and have him hobbling around on a crutch. I don't want to do that movie."

Which brings me to a question I often have with biopics, films that deal with stories we already know, with endings we expect. How do you keep that cinematically riveting? It's all in telling a story suspended in time, one that takes place, according to Tamahori, "in a time period that was a here and now, a two-year period." He continues, to explain the logic of that, by saying, "history knows what happened to him and I thought it was kind of a sad ending for him in a way, King Lear like."

Brody then describes the project as a "Sixteenth Century, action, road movie," to which Tamahori adds "without the Dodge Charger" and without filter, I find myself saying, "with a Range Rover?" before remembering that's a whole other road movie, A to B, produced in the UAE. Yes, check, another Cannes, a different film. But since I'm in the company of men who clearly listen, my outburst is met with a "not the Range Rover! It's always a Dodge Charger!" by Tamahori and a questioning, "who does a road movie with a Range Rover??" by Brody. I point out it's a project from the Gulf and Brody replies, amused, "that sounds fitting, they can afford it... Range Rovers."

Brody admits that he is, "at the tip of the iceberg as far as character research right now, and have a lot of work ahead of me." He finds that the beauty of this particular film lies in the fact that "it's not an entirely factually accurate depiction and it's not my director's expectation and so this will be a highly imaginative process that we'll get to explore together." I sigh with relief, no overbite prosthetics for Brody. Phew. Brody finishes the thought by pointing to Tamahori to say "as you can see he's a plethora of knowledge and wisdom and that's invaluable for an actor."

The fascinating side of Charles V lies in playing "someone who is such a pragmatist and who is unsentimental, and yet not be aloof, because he's battle hardened and a real fighter and I don't know if he likes solitude but I'd like to incorporate a bit of that..." Brody continues, "and I think quiet solitude, as you said. Which I do crave but at the same time I do have an insatiable appetite as well, to pursue the things that are meaningful to me. So I can relate to that, and even though they are maddening, I seem to keep throwing myself into more things to juggle."

I then ask both if they believe emperors were what we today call dictators, to which Tamahori quickly replies, "yes, pretty much" and Brody adds, "their rule was." Tamahori then continues on his thought, "you put the crown on the head in any culture, you are effectively giving an approval for people to behave however they see fit. And it's not so much dictatorial as authoritarian. Kings and queens always ruled by divine decree, appointment by God."

Emperor will open with a scene of the suppression of Ghent, what Tamahori calls, "a bloody affair where he had to put down a tax revolt... and show... the people in Ghent [they] should not f*** with the Holy Roman Emperor. He had to come in..." Brody finished the sentence for him, "and make an example!" Another outburst from me, "but we're doing that today!" to which Brody jumps in, "I was going to say, that hasn't changed!"

Cinema is always a means to educate, without teaching or preaching, in my book. So I have to ask the most interesting men in Cannes, with the most excitingly historic project, their thoughts on whether we should expect a little learning with our entertainment. Brody answers with a rhetorical question, "it's up to the individual to interpret the lessons that are in anything around them, right?" To which I add that cinema is more fun than, say, watching the news or reading Wikipedia. Brody indulges my thought, "yes, it's more fun but my objective is not to teach lessons in this case for instance, that's not the goal." He continues, "I think what's interesting, what Lee is saying, of course there are so many parallels and history repeats itself and yes, there are lessons to be learned from the mistakes of the past and also people who are in power have studied how previous powerful entities gained that power and remained in power and cultivate that." His ending thought sends chills up my spine, it's so spot on, "so much of military tactics are derived from years of exploring how to overcome another person, so it's horrific."

I then begin to ask each of them to describe the other in three words, but as soon as I am midway through my sentence, I realize the impossibility of my request. These are men who create, who are responsible for some of the best contemporary works in the Seventh Art, with imaginations that burst at the seams. Brody confirms my hesitation by declaring, "I couldn't describe anyone in three words... Let alone Lee or myself! Lee is way more complicated than me, I'm sure, and I wouldn't know how to begin." Tamahori is more accommodating, but he spells out, almost like a robot, "three words to describe Adrien Brody: My, Smarter, Brother." To which Brody concedes, speaking of Tamahori, "My, Wiser, Leader. There you go, how do you like that!"