I had successfully avoided Cancún for 36 years. Until this summer.

Touching down in the Cancún International Airport, I saw them. Overpacked and underprepared, clad in velour suits emblazoned with Victoria's Secret PINK across the buttocks. Speaking loudly to people whose first language is Spanish to "help" them understand English. I just about pivoted on my heel. But I stayed the course.

I've studied in central Mexico, traveled from the western Baja Peninsula to eastern state of Yucatan, all with a self-congratulatory air of having never set foot in Quintana Roo--the state that houses Cancún. The home of the sticky flip-flopped, the sunburned, the slurring masses yearning to be hammered.

But maybe that was short-sighted. 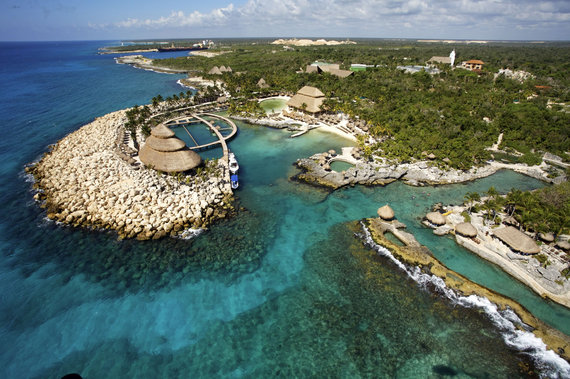 This area is also home to millennia of Mesoamerican history, a deep blue Caribbean Sea with turquoise fringes and an easygoing people. Just about 40 minutes south of Cancún, I found myself a world away from Señor Frog's in Xcaret (sh-kah-RET), a massive eco-archeological park with everything from organized adventures to animal sanctuaries to beautiful beaches--think Mexican Jurassic Park--a place where culture is displayed, preserved and celebrated.

Quintana Roo is still the land of the Maya, who are not some "ancient civilization"--many live in the area today. To help preserve some of the community's lost heritage, Xcaret (meaning "little inlet" in Maya) endeavors to preserve so much of Mexican culture from cuisine to religion to sport across its 200 coastal acres. The ancient Mayan world is still very much alive in Quintana Roo.

Pablo and the Chocolate Non-Factory


Inside of the Xcaret's taller de chocolate (chocolate workshop), I met a young Totonac man bubbling with a kind of natural joy. Born in Veracruz to one of Mexico's remaining indigenous communities, Pablo Delgado Sante is an expert as making chocolate the ancient way -- that is, entirely by hand. When he was only three, his abuela taught him how to combine cocoa beans, cinnamon sticks, peppercorns and cane sugar to create something sacred. For the Totonac people, chocolate wasn't a treat for just anyone, it was a medicine for the sick. 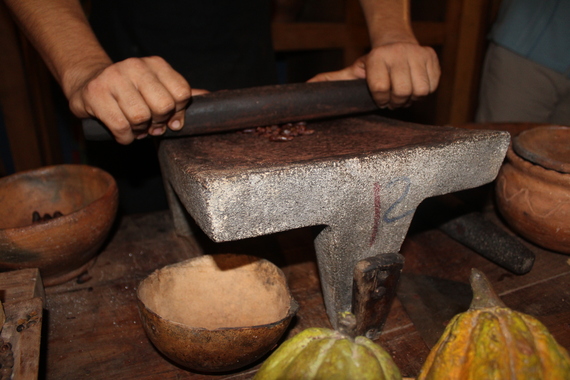 Inside of the humid and fragrant taller, Pablo rolled the ingredients with incredible force en metate, on a grindstone, with a metal rolling pin. The 21-year-old chocolate maker is also something of a linguist, who explained the steps in his native Totonac language, Maya (for good measure, since we were in the land of the Maya) and English. Plus he speaks four other native Mexican languages and Spanish. 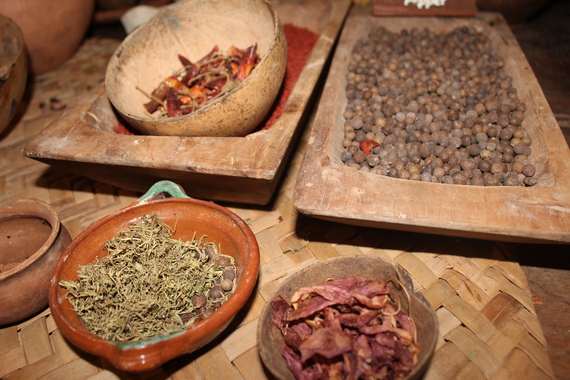 When he was finished, Pablo pulled out a small wooden flute and drum and played a quick tune with seriousness. This, he explained, was a prayer of thanksgiving to the gods for giving us the cocoa bean, the peppercorn, the cinnamon sticks and the sugar cane to make xocolate. Then we shared the chocolate scraped right off of the metate. It was sticky sweet deliciousness, still warm from the energy it took to create. Something worth praising indeed. 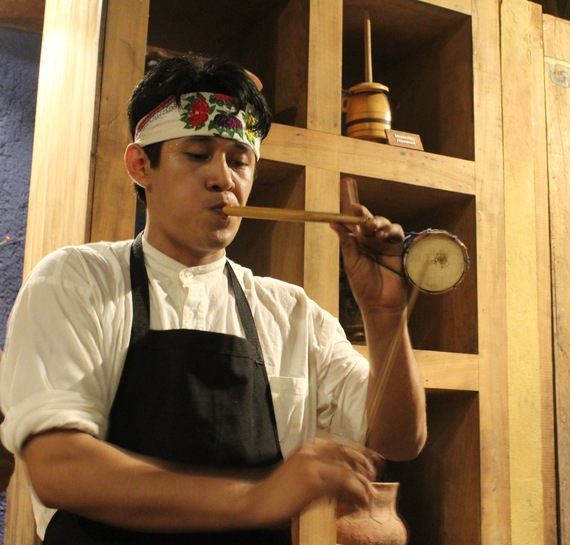 Pablo's ancestors likely saw and revered jaguars, the glorious jungle cat that used to roam the American continent from Arizona to Argentina. In Maya mythology, the jaguar could cross even further than a continent. It could cross between this world and the underworld. 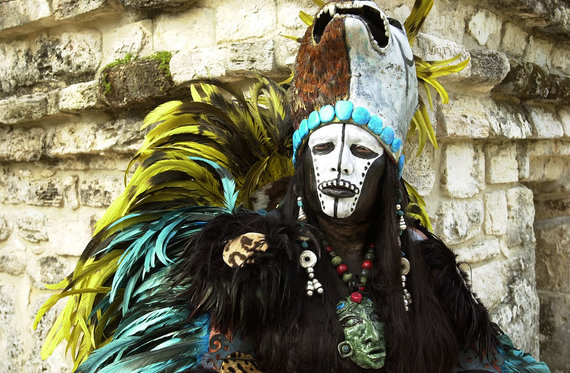 Members of the Maya ruling class would wear jaguar pelts and often slid "jaguar" into their name to demonstrate their tribe's power. It remains the largest feline in the Americas, but is now endangered with only about 1,800 in the eastern Mexican states of Quintana Roo, Yucatán and Campeche.

There are two jaguars inside of Xcaret. One has the telltale body of black, white and orange, while the other appears entirely black. (It does have rosettes, they're just more difficult for humans to see if not caught just so in the sunlight.) The animals usually live alone, so this habitat isn't keeping them from a life otherwise lived in a pack. 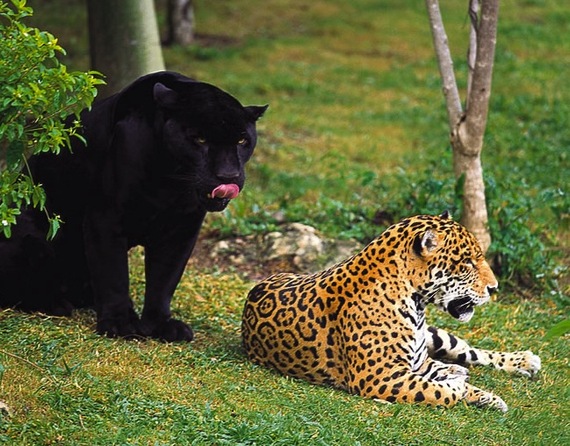 The park preserves and protects a variety of Mesoamerican species--from the jaguar to the scarlet macaw to the crocodile. In the brand new aviary, some of the most sacred Mayan birds are housed and protected. In millennia past, their feathers were used in ceremonial headdresses, during religious athletic competitions like the ubiquitous pok-ta-pok.

Pok-ta-pok or (juego de pelota in Spanish) was a religious sport and probably a predecessor to soccer. On nearly every Mayan ruin is a ball field. The game was a vital component of civic and religious life, with some believing that the court itself was a portal to the underworld. 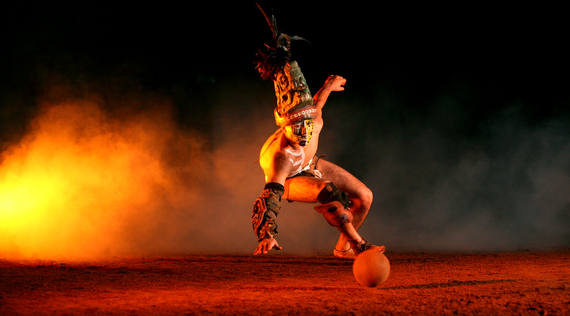 Two teams of approximately four men each keep a 10-lb. rubber ball in play without using their hands. A pervading tale is that the captain of the losing team was sacrificed, perhaps beheaded, but some refute that as just slander to disparage the Maya as cartoonishly violent. Either way, at Xcaret, the game is played inside a recreated ballcourt with sloped walls and a stone ring on each side. Not built to scale, the Xcaret court makes it easier for a player to get the ball through one of the stone rings on each side for the win, which would have been a rare occasion during an ancient match.

Here, too, travelers can witness a reenactment of pelota puréchepa, a ball game of the Puréchepa people (not the Maya), originally from what is now Michoacán. A kind of fiery hockey, players use wooden sticks to hit a ball into a stone cauldron on either end of the field. Said to represent the sun moving into the celestial vault, the spectacular sport was played in the pitch dark of night.

Deep in the jungles of contemporary Quintana Roo, the Maya still live in small communities, often only speaking Maya, and practicing some of the ancient rituals that Xcaret preserves. Of course, the great empire has long fallen and its grandeur mostly lives in books, on temple walls and in reproduced spectacle. But a journey to--or at least through--Cancún to Xcaret can provide a glimpse into part of an authentic and enchanting Mexico. Velour not required.

US Presidential Election 2020
Breaking news, analysis and the latest polls on the presidential race from HuffPost’s politics team
See More
Voting Made Easy
Register to vote and apply for an absentee ballot today
Register now
More:
MexicoCaribbean TravelmayacancunQuintana Roo
Newsletter Sign Up
An essential daily guide to achieving the good life
Subscribe to our lifestyle email.
Successfully Subscribed!
Realness delivered to your inbox