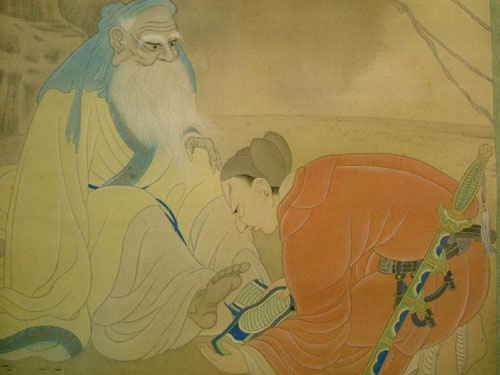 My discovery of the rich art form that is Japanese scroll painting occurred in idle moments spent on the web at the height of the Great Financial Crisis. It was a bit of self-prescribed R & R between trying to make sense of the not so brave new world of derivatives and credit default swaps and wondering how to explain it to my students in an International Political Economy course. Looking randomly at Asian antiques, I hit upon these scrolls whose abundance was matched by high quality. Thus began a minor addiction. What I found was less Zen disengagement than a humanism pervading seemingly every aspect of life and society.

Japanese scroll painting is at once commonplace and exotic. Commonplace due to the profusion of banalized, rough silk pictures that flooded the United States during and immediately after the post-war occupation. Driven by the demand from hordes of untutored foreign buyers, and the dire financial pressures suffered by artists, that historic transaction sounded the dead knell for a rich artistic tradition deeply rooted in Japanese society. Exotic because there has been slim interest in this expression of national sensibility. Whereas the woodblocks of Hokusai and Hiroshige have been staples of the artistic commerce between Asia and the West, there was never comparable attention paid scroll painting. A few names from the 18th and 17th centuries, like Kano and Gessen, may resonate among the cognoscenti, but that is about it.

One explanation for this phenomenon is that Japanese pictorial art has been relegated to the status of a derivative offshoot of superior Chinese creative works. The strong Chinese influence certainly is there - thematically and in terms of form and technique. The condescending judgment is a gross distortion of reality, though, that implicitly disparages the superb, distinctive qualities of scroll painting in Japan. Indeed, one can argue that the genre there exhibited greater vitality and originality in the period from 1750 until 1940. A perusal of any representative sample makes its fine qualities abundantly clear.

Scroll painting subjects fall into four rough categories: nature; historical personages and events; religion; and workaday or domestic scenes. The first reflects that deep association Japanese have felt with nature from early times. Landscapes of lofty mountains, most familiar to Westerners, are prominent. That has given the generic name sansui (mountain/river) to the whole sub-category of outdoor settings. Finely detailed renderings of birds, often perched on trees and shrugs, are another aspect of nature subjects. Notable persons and tales, the latter often allegorical, compose the second category. They tend toward some stylization, to varying degrees, in the visual depiction and telling. The figures are not necessarily heroic, e.g. a popular figure is Sugawara no Michizane, the 9th century scholar-poet who is esteemed as the patron of education. Sages outnumber generals and emperors by a wide margin. We find, too, character portraits of anonymous persons identified only by profession or title that convey penetrating psychological insight. Buddhism and to a lesser extent, Shintoism inspired some of the most powerfully evocative scroll paintings. Episodes from the life of the Buddha, Kannon Basatsu the goddess of mercy who is a feminized interpolation of a Hindu or early Buddhist bodhisattva (known as Guan Yin in Chinese iconography), Shinren - the founder of Zen, Amaterasu - the central kami in Shinto eschatology, are recurrent subjects. The best of these religious paintings are aesthetically exquisite and inspiring as expressions of spiritual sentiment. Some are impressive statements of disciplined dramatic effect. The numerous paintings of common folk engaged in prosaic activities are also intriguing on other counts. For they provide a sense of how their lives were experienced among the common folk, their pastimes and perspectives, depicted with warm humanism. 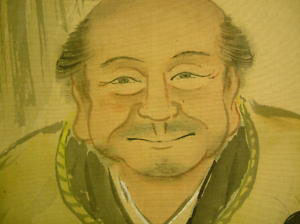 Prowling among Japanese scroll paintings, one encounters intriguing questions and arresting images. Why does a red tinge to a face signify virtue whereas in the West it suggests only embarrassment? Were the artists who show Kannon cuddling a Jesus-like infant Christians? Why is the blustering physicality of twentieth century Imperial Japan so completely absent? How did all those sages gazing at waterfalls or convivially gathered in bamboo groves enjoy the equivalent of sabbaticals or foundation grants? As to riveting images, here are a few: the heavily armed samurai literally stopping to 'smell' the cherry blossoms; Gautama leaving his renouncer's cave in such haste that he struggles not to lose a sandal; a farm boy carrying a bundle of hay while reading a book with rapt attention.

Where does one see Japanese scroll paintings? Museums tend to restrict themselves to the classic period and a few classic artists from the early Edo period. Art book collections are few and far between - over here anyway. Oddly, the best place to familiarize oneself with the genre is the web. Hundreds are available for sale. They naturally are of mixed quality, but there always are first rate scrolls available. Scroll paintings have fallen out of fashion in Japan. Traditionally, they were the main wall decoration in Japanese homes; those with nature scenes changed seasonally. An evolving sense of decor seems the reason why dealers are so well stocked. They are scrupulously honest: in representation (including close-ups of even minor flaws), and the scrolls are quite inexpensive. I hesitate to mention that they are marketed mainly on eBay only because its controversial former chief executive is now running for high public office in California - and this, after all, is the Arts section.