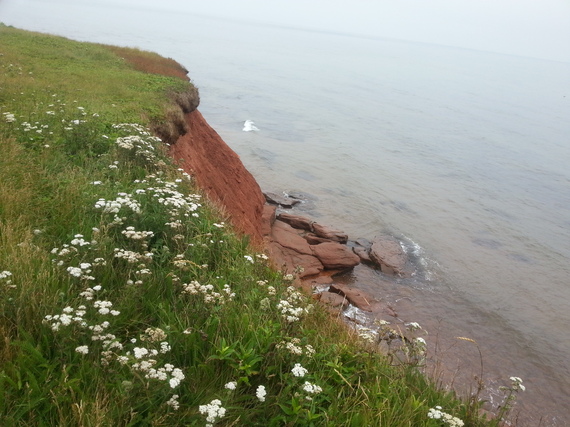 After making my first foray to Prince Edward Island with my friend Emily and our four children over twenty years ago, I returned to Massachusetts and vowed to return every year. I made good on that vow.

The first house I'd rented was a cottage on Rustico Bay, near the center of the island. Emily and I returned there the following year. We frequented Brackley Beach -- which the kids called "Broccoli Beach" -- and explored museums dedicated to Lucy Maud Montgomery and Anne of Green Gables.

As the years passed, we also discovered the wild westernmost corner of Prince Edward Island and the wonders of Basin Head, a beach near the eastern tip of the island that immediately became a favorite destination. This is because the bridge over the river at Basin Head feeds into the Northumberland Strait. Despite "no jumping" signs posted around the bridge, everyone leaps and twirls off it into the swirling green river below, which has such a powerful current that you are convinced that you'll be swept out to sea. Then the river deposits you on a sandbar and you wade back to do it again.

Year after year, I returned to the island. When Emily couldn't go, I began cajoling other friends to accompany me. Finally, my friend Susan Straight -- my best friend from graduate school -- said she'd like to see the island, too.

"Really?" I sputtered. We were talking, as we so often did, by phone, because Susan and I have never lived near one another. In fact, we've never even resided on the same coast. She is a native of Riverside, California, and still lives in her hometown. My father was in the Navy and I moved nearly every two years of my childhood. Since graduate school, I have mostly been in Massachusetts.

Susan and I met through our thesis advisor, the writer Jay Neugeboren. When Susan began the program, he assured her that she and I would become best friends. She scoffed. "What would I have in common with some New England chick?" she wondered.

I had gone off to teach that year at the American School in Guadalajara, Mexico. Jay wrote to me and said, "When you come back to finish your thesis, I know you're going to be good friends with Susan Straight."

I had my doubts. "Why would I want to know some southern California blonde who's probably as dim-witted as she is gorgeous?" I wondered.

Politely, Susan and I sidled up to each other at one of Jay's parties the fall I returned from Mexico. We started talking that night and we haven't stopped since. We have supported one another through publishing rejections and successes, divorces, pregnancy and motherhood, aging parents, dying dogs, personal health crises and works-in-progress that we still swap faithfully as we craft our new stories, essays and novels.

When Susan agreed to come to PEI with me, I was overjoyed despite the nightmare logistics: she was in southern California. How the heck could she and her three children join me in the Canadian Maritimes? And how would we transport all of our kids up to the island?

The solution: Susan and her family flew to Boston. From there, we each drove a van stuffed with kids, toys, beach towels and luggage on the twelve-hour car-and-ferry odyssey to Prince Edward Island. And, just as Susan and I formed an instant friendship, the island worked its magic on my best friend. She, too, has been coming to the island nearly every year since.

As the years flew by, we mothered not only our own children on the island, but the children of friends and neighbors, too. One golden week in July, Susan and I rented a pair of cottages in Fortune Bay where the kids played tag with French-Canadian and Spanish speaking families staying in the same compound.

Another time, we rented an octagonal house on the edge of a steep red rock cliff overlooking Souris Harbor with eight children. Always, our rhythms have been the same: we tired the kids out during long days at the beach, and at night we'd give them a massive meal and play board games. 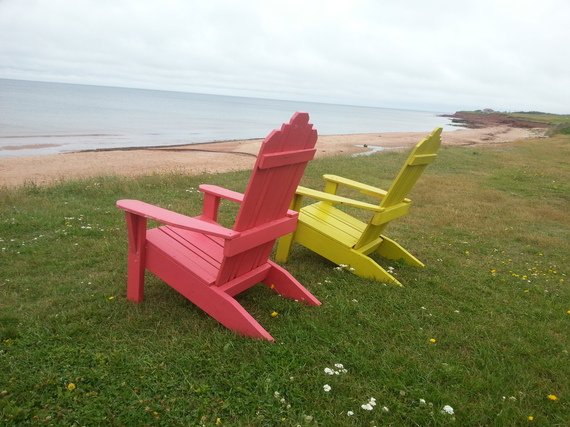 Between dinner and board games, or even after the games were done and the children watched a movie, Susan and I sneaked in time for ourselves: cups of tea with chocolate bars at one kitchen table or another, and long walks on the red sand beaches or up quiet clay roads past tidy farmhouses. One summer we brought Susan's dad, who had grown up in New Brunswick, so that he could visit his brother and eat dulse, the dried seaweed he'd grown up snacking on as a child. And this past summer I brought my mother, because none of my children could come and Susan's had already been and gone.

How have we sustained this friendship for over thirty years? Susan and I are two women with vastly different upbringings. We married men who are polar opposites. She is blond and I am brunette. She is a tenured university professor and literary writer who has won nearly every award in existence. I earn my living as a ghost writer, journalist and, now, by writing commercial fiction.

We see each other, at most, twice a year -- on Prince Edward Island every summer, and then sometimes in New York or Boston or California, if one or the other of us has a book event and the other can escape the Bermuda Triangle of her domestic responsibilities.

This friendship should have faded away after graduate school. It should have shattered through the years, forgotten or buried by all of the other responsibilities and relationships the two of us are constantly juggling. And yet, it has not. It has sustained us. I believe that's largely because of this magical island that has such a hold on both of us.

Susan and I recently bought houses on Prince Edward Island. (We both came by these houses in strange ways -- I'll save that story for another time.)

Both of our houses have a lot of history and are located near our favorite part of the island, the easternmost tip. I'm publishing a novel set there, called CHANCE HARBOR, in October. Susan is working on a book of her own set on the island.

Meanwhile, she and I will keep walking those red clay roads and the wide empty beaches in the years to come. Best of all, we can be neighbors once a year, sharing tea and biscuits as we tell our stories.