A river cruise may be one of the most convenient and economical ways to explore Burgundy and Provence for those of a certain age.

"Paris is my home," says Balwinder Prabhakar, explaining her emigration from India to France, after falling in love and marrying a Parisian some 22 years ago.

My husband and I meet Balwinder, our group's "program director," in a nondescript conference room at Novotel Paris Tour Eiffel on the first night of our 13-day escorted tour. Our mostly over-50 group includes teachers, doctors, nurses and engineers, as well as quilters and garden enthusiasts -- both couples and singles. A significant number of our travel companions are, like us, retirees at a similar stage of life. All Americans, they come from almost every region of the U.S. After exploring Paris from this base for several days, we will be embarking on a seven-night river cruise on M/S Chardonnay through Burgundy and Provence. 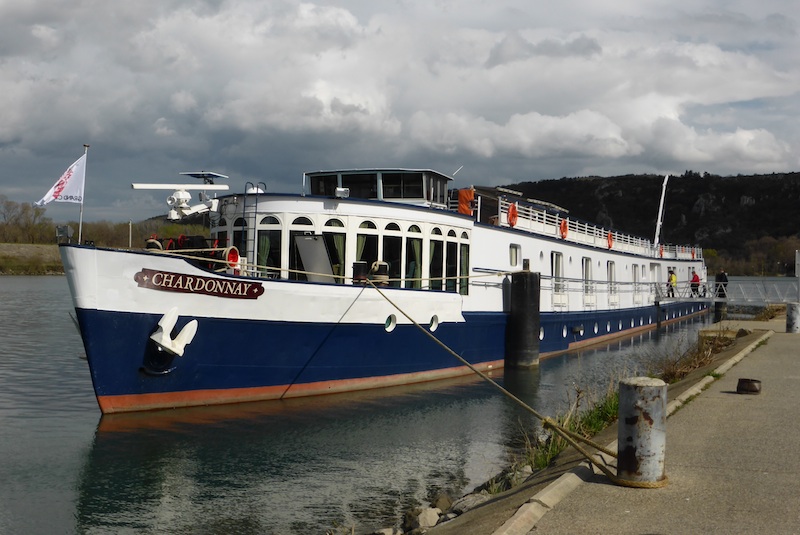 The most remarkable thing many of the travelers have in common, however, is unwavering loyalty bordering on devotion to the tour operator, Grand Circle Travel, based in Boston. Most have been on multiple trips with Grand Circle, one couple in our group has been on 28 of them. We wonder whether we have fallen in with some type of cult.

Prior to this, we had the usual misgivings about participating in an escorted tour: Fear of being corralled in a group, worries about following a schedule that wasn't our own, and concerns over missed opportunities for serendipity. But we discovered our fears were largely misplaced as we experienced a new-to-us way to travel.

In feel-good protective custody
When the Grand Circle booklet arrived in the mail, detailing every aspect of our trip, we realized not everyone is an adventurer with time and moxie to independently plan travel overseas. It described each day's schedule, on ship and shore; hotel and transportation arrangements; information about other logistics that might raise anxiety (like tipping policies, and conversion of temperatures from fahrenheit to celsius); and options for pre- and post-tours. Ironically, there was even a separate section called, "What to Do When the Unexpected Happens."

Caroline, a charming, English-speaking freelance journalist in her off-hours, is the first representative of the company we meet at Charles De Gaulle Airport. She is carrying a placard saying Grand Circle. She escorts us to a van driver who, en route to our hotel, negotiates the Paris rush hour traffic. Balwinder meets us in the hotel lobby and shows us to the reception desk for check-in. The transfers are seamless.

The next morning, we accompany her on a "vicinity walk" similar to ones she will lead each time we arrive in a new town. She knows every crevice in this neighborhood, pointing out places to eat and shop, and the closest ATM machine at which to exchange money.

She suggests spots frequented by tourists and those that aren't, hands out maps, and tells us where to pick-up public transportation. Without varnish, she warns us repeatedly about pickpocketing techniques currently being used in Paris (Despite her admonitions, one person in our group will be victimized an at ATM machine.) She feels like an old friend we have come to visit.

Full breakfasts at the hotel are included but all other meals in Paris (except one group dinner) are on our own. Because we had visited monumental Paris, the Louvre, and Musee D'Orsay less than a year ago, we decide our strategy will be one of walking and wandering through the city---between meals. Some in our group have signed up for optional motor excursions to Versailles and Monet's Gardens at Giverny.

One morning, we mention our lunch plans at Café Constant (one of three restaurants on Rue Dominique owned by Chef Christian Constant) to Balwinder.

Apropos of her suggestion, after lunch, we explore this shopping street frequented predominantly by Parisians. Too full to eat another thing, we take photos of cheese shops, boulangeries, and markets selling oversized fruit and vegetables. 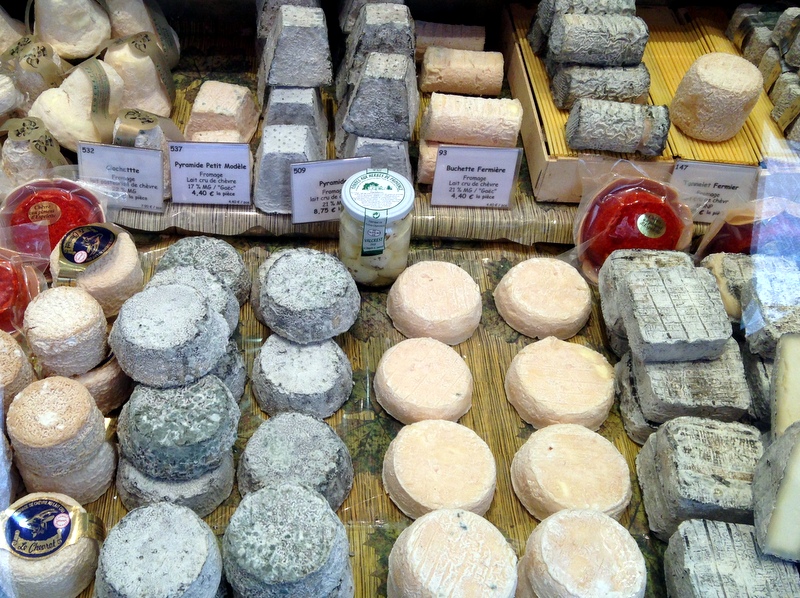 Our days in Paris pass quickly until it's time to place our luggage outside our room for an early departure before embarking on Chardonnay in Macon. Without the hassle of calling a bellhop or carrying baggage on our own, we are soon comfortably ensconced in a Mercedes motor coach heading south with our bags in the belly of the bus.

Our cruise: Structured but flexible
With twin beds, a small sitting area with a flat-screen TV, ample storage space, a full-shower and separate lavatory, and a sliding glass door with a French balcony, our cabin (#22) isn't luxurious. It turns out to be extremely comfortable, however, light and roomy with twice a day maid service. The public areas (a lounge, dining room, deck and front porch) are warm and welcoming.

Each evening before dinner, Balwinder briefs the group on places we'll visit the next day. As our riverboat makes its way first along the Saone and then the Rhone River, we establish temporary residency at each town dock. 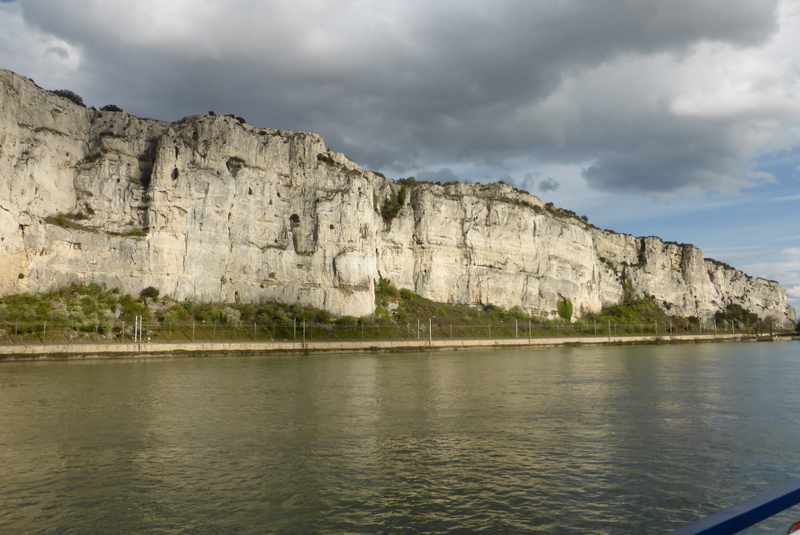 Dramatic cliffs along the Rhone River

In Macon, we are steps away from the sights and smells of a busy food market. In Lyon, we see the brilliant light display at night created by the city monuments, and awake to the colorful Flower Tree sculpture at Place Antonin-Poncet. At the small town of Tournon, we spot a 15th century castle. In Viviers, we dock within walking distance of Roman ruins. In Avignon, we see views of the bridge made famous by the chanson. In Arles, we walk the same streets once traversed by Van Gogh. 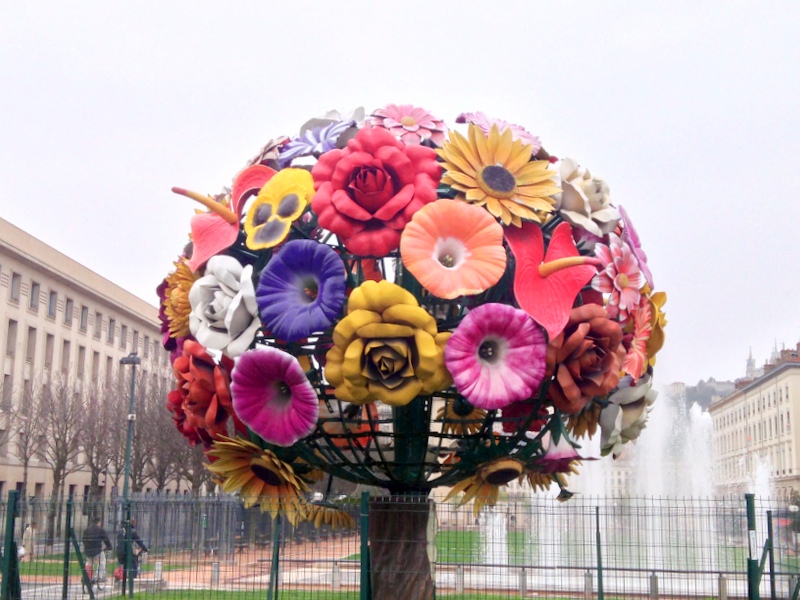 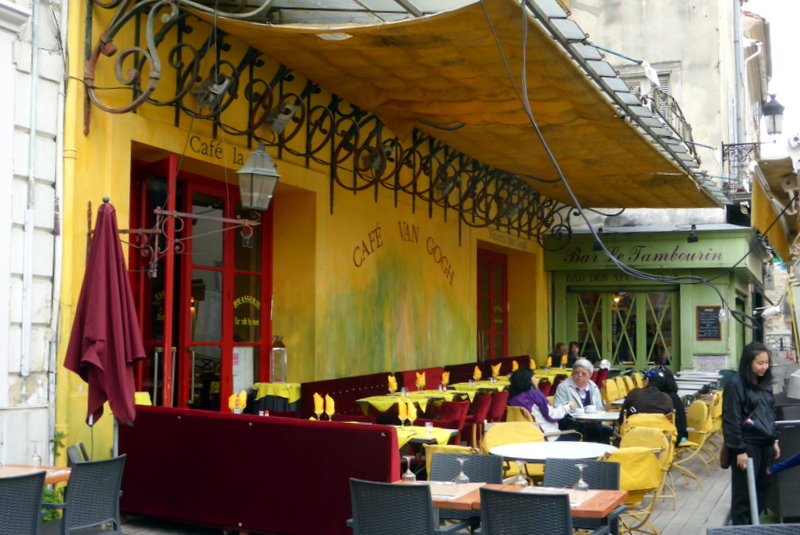 Le Café Le Soir in Arles, which was painted by Van Gogh

The half-day group excursions entail one to three mile walks in each town, at a comfortable pace. Balwinder is joined by local guides who live in the towns we are visiting. We learn how invaluable it can be to know the locations of public rest rooms and which ones require coins. 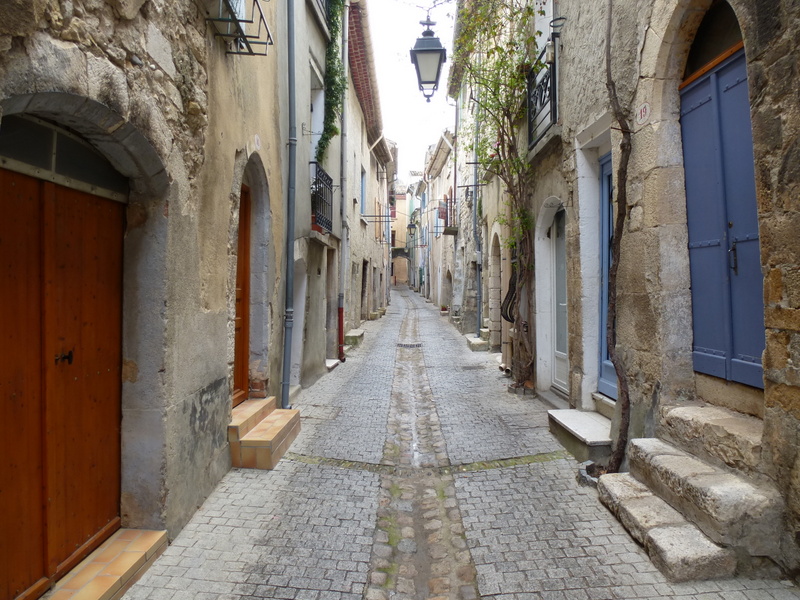 A walk in the ancient town of Viviers

Attired in a hard-to-miss orange jacket with a beret (thankfully, she never carries an umbrella), Balwinder reminds and empowers her flock more than a few times, saying: "You are on holiday. It's your choice. You can walk with the group, sit in a café, or do something on your own." 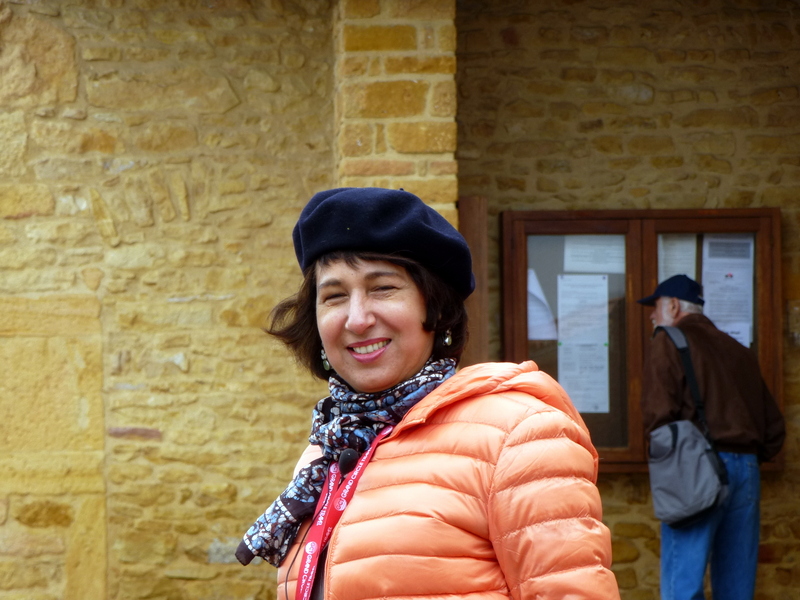 It is mentally tough to break away from the group because we're afraid of missing out on something interesting in the process. But we opt out of a tour inside the Papal Palace in Avignon for a romantic lunch at the highly recommended Restaurant Christian Etienne (set inside the pope's residency) and opt out of touring the 15th century Hotel Dieu in Beaune, once a charity hospital, because we had previously been there and now wanted to see more of the city. 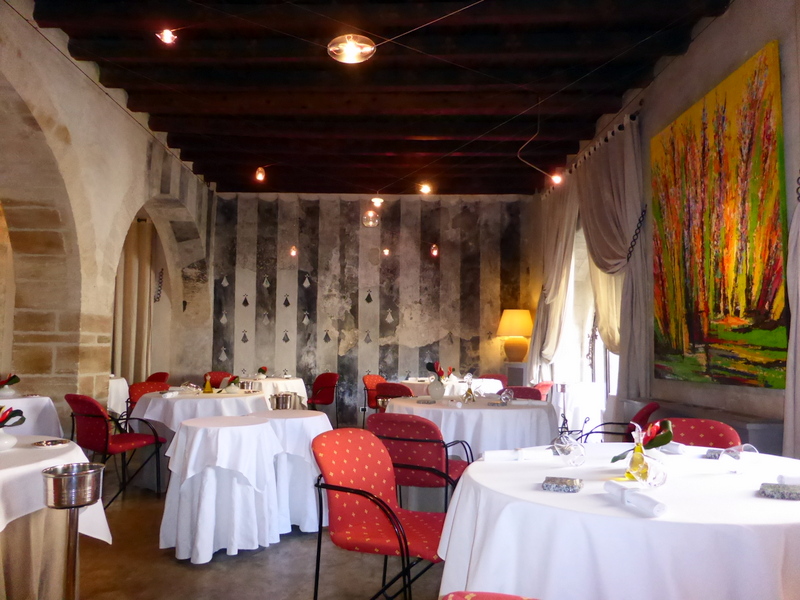 Of course, anyone headed to Burgundy and Provence has to have more than a passing interest in food and wine. The menu on M/S Chardonnay is varied, of good quality, nicely presented, and designed to please an international palate. It offers vegetarian alternatives as well as traditional French dishes like onion soup, beef bourguignon, crepes suzettes, and a cheese course at the end of dinner. The French bread served with meals is amazing; decent wines are complimentary with dinner. 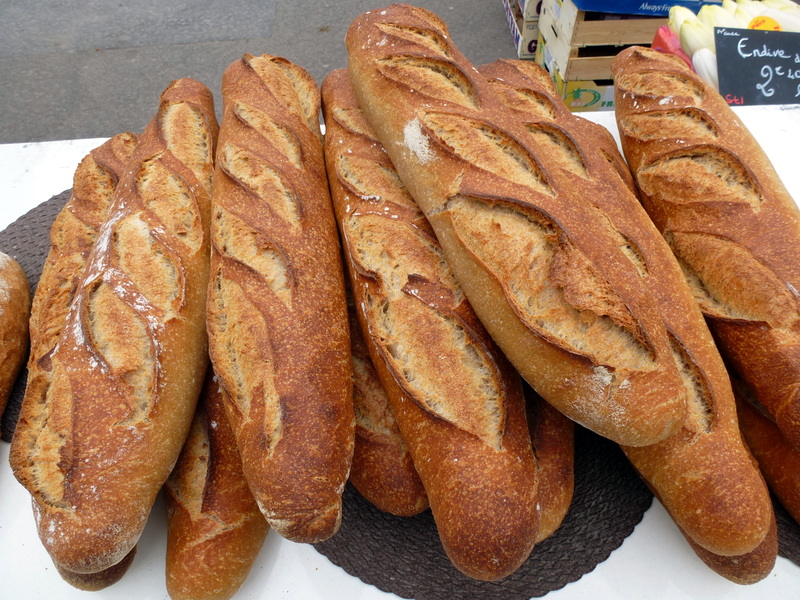 French bread at the market in Lyon

A spirit of discovery
Naysayers of escorted trips question whether travelers can have authentic experiences as part of a group. Au contraire, our program director (with a graduate degree in history, the insights of an ex-pat, and a terrific sense of humor) offers us a unique glimpse into French language, customs, and culture. On the boat, she explains the history of drinks like absinthe (nicknamed the green fairy), pastis (often consumed in the morning), and introduces us to the iconic French aperitif from Dijon, kir. 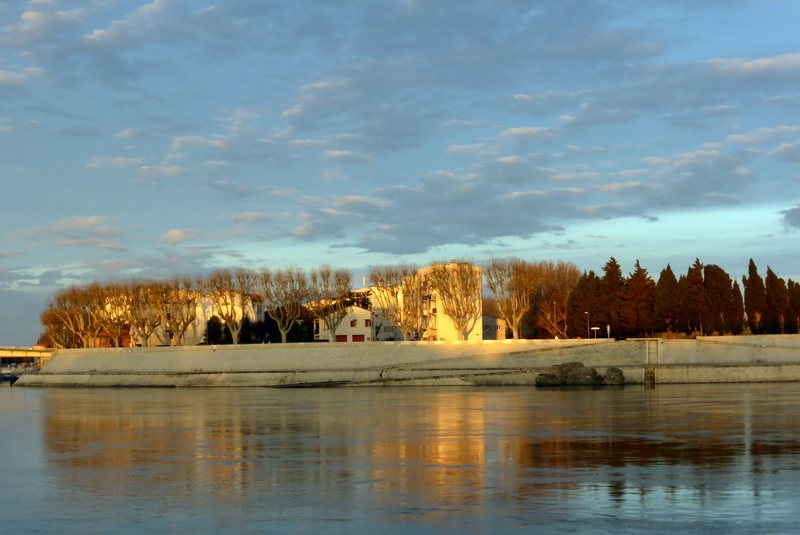 The river at sunrise in Arles

Balwinder sprinkles French words and expressions into her speech so liberally that we soon acquire a working vocabulary. She is equally adept at explaining the workings of the hydroelectric turbines associated with the locks as she is in predicting the mistral winds.

Having worked for the same company for 13 years, our guide has visited these small towns so many times that shopkeepers and men playing bocce ball on the street stop to greet her. By way of example, she encourages us to speak to locals, too.

As part of the cruise line's home-hosted dinner program, eight of us dine at a modest home in the tiny town of Tain L'Hermitage, which has less than 6,000 residents. My high school French gets a real workout as we chat about life with Helene and her husband over a simple but tasty meal of chicken and rice. On another evening, an octogenarian comes on board the boat, along with a translator, to talk about the role he played in the French resistance against the Nazis. 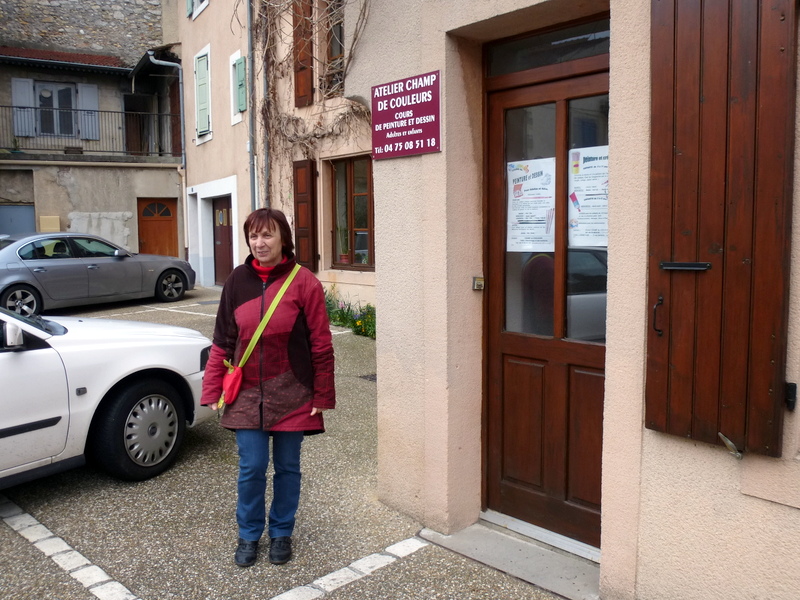 Helene outside her home, which has a painting studio on the ground level

We often go beyond port cities, too. We travel to the not-often visited Rhone American Cemetery in Dragnuignan, one of 24 such cemeteries overseas, where we meet a military historian. We attend a wine tasting with a pair of local vintners where Burgundy borders the Beaujolais region, home to 13 French wine appellations. On an optional walking tour of the ancient Provencal village of Les Baux-de-Provence, we witness a light show where works of Monet, Renoir and Chagall are projected onto the walls of an old stone quarry. On our last day, we disembark in Nice and check into a hotel to explore a little bit of that city. 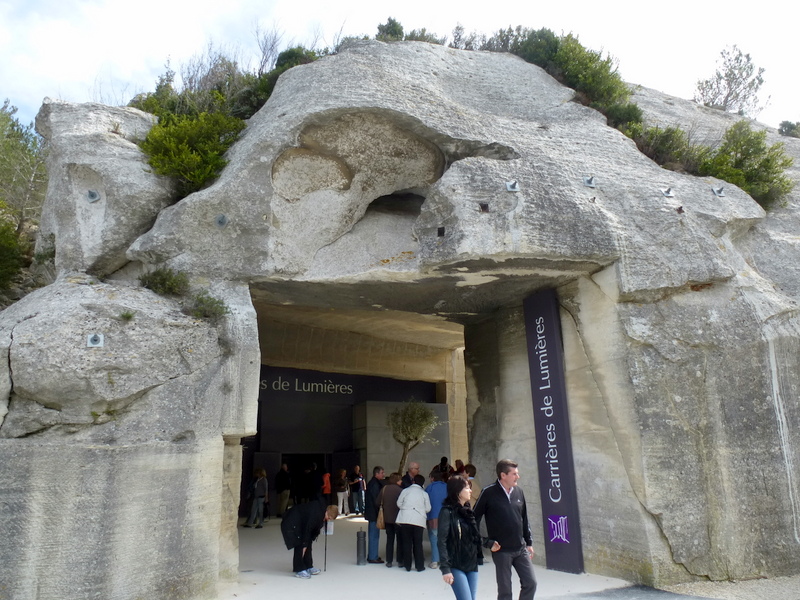 Looking back
No trip is perfect and neither was this one. The hotels were basic and lacked charm; food on the ship, although interesting and varied, wasn't Michelin-quality, and it was frustrating to spend so little time in several cities and towns to which we now pine to return.

But would we take another escorted river cruise like this one or recommend it to others? In a heartbeat. Our voyage with Grand Circle Travel on the M/S Chardonnay convinced us that an escorted river cruise is one of the most enjoyable and economical ways to discover the French countryside. (In fact, we would probably follow Balwinder any other place she was going.)

Grand Circle has struck a perfect balance in both taking care of and enabling its travelers. For lifelong learners, it's a great way to get off the beaten path without going it alone. Maybe that's why so many of them return over and over. 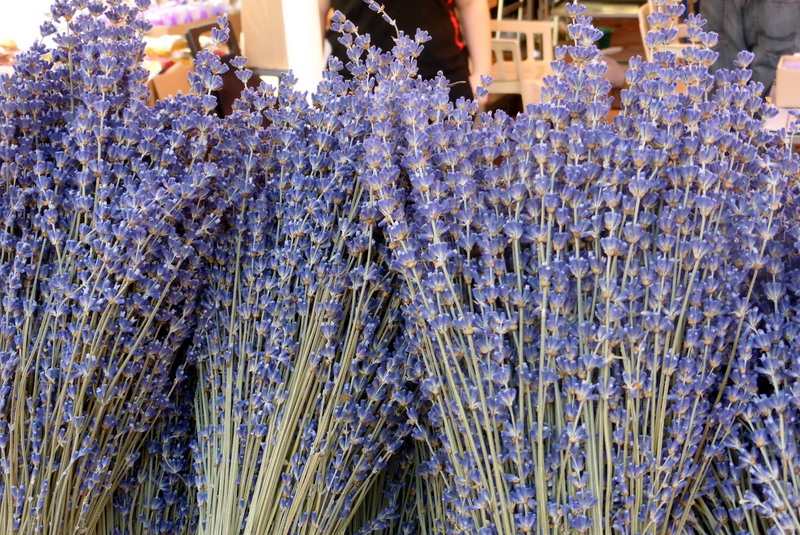 Memories of lavender at a market in Provence

IF YOU GO:
Cruising Burgundy and Provence to the Cote d'Azur: Dates, Prices & Additional Information