In order to create or sustain family friendly workplaces, you need buy-in from organizational leadership, effective manager training, and employee accountability. Most companies don't have all three, and as a result they lose their top talent. And, it's costing them a fortune.

A month ago, I wrote a piece about the challenges to implementing family friendly policies at work. I had heard stories about blatant discrimination in what were thought to be the best companies for working parents. I wanted to hear more. I requested stories from parents about their workplaces, companies that walked the talk and those that didn't. The response was overwhelming; I was inundated by testimonials from dozens of industries. These stories came from accomplished, successful professionals in their thirties and forties with young children who were struggling to stay on course with their careers. They were lacking the support they needed to take care of their kids when at work. These high-performing employees were deemed less valuable in the workplace because of the commonly-held assumption that their family-oriented priorities replaced their drive to succeed.

I read egregious examples of companies using outdated ideas of when, where and how work gets done to force caregivers out of their jobs. Not one of these stories came from a professional who intended to leave their job before or even after having kids. These stories came from people who were looking to make it work. They wanted solutions and instead they were met with discrimination.

One saleswoman thought her company would be different. "I was assured by my boss that family came first," she wrote. "When I asked for flexibility, I was informed that it 'looked bad' to the other employees. When I would have a doctor's appointment, I would get 'talked to' about my commitment to the team." All this was occurring, she noted, while she was leading her sales department in revenue goal achievement.

It didn't seem to matter what company policies were in place to address this, or even who sat on the senior leadership team. One woman wrote me from a top-rated company for working mothers run by a female CEO. When she returned from maternity leave, she found her boss had hired two people to replace her. When she complained she was given an alternate option to take a different territory that would generate less revenue. Her company had also assured her she would have the space, freedom and opportunity to pump milk for her newborn. She sent pictures of her breast pump, sitting next to her purse at the bottom of a bathroom stall.

Another response came from a senior associate attorney at a major law firm who has accepted the reality she hoped had been addressed before she reached this phase of her career. "I now know that it's fairly common to be laid off while on maternity leave, or shortly after returning to work, in cases of complying with FMLA. I have a handful of other attorney moms who have received written warnings about productivity due to the 'time wasted on pumping.'"

These stories confirmed my observations on the ground. In my coaching and consulting practice, I've seen parents derailed from the path to partnership or advancement due to discrimination, I've seen overwhelmed managers reinforce resentment of working parents among their childless colleagues instead of creating flexible work solutions, and executive leaders trying to enforce wonderful flexibility policies and practices with limited support.

A Baylor University study confirmed that mothers are much more likely to stay on the job if they have greater control over their schedules. Without that support, they are much more likely to leave. Research suggests total turnover costs could range from 90 percent to 200 percent of that employee's salary. If those numbers are correct, a company at risk of losing three executive moms could be facing losses in the millions. Some companies like KPMG, Ryan and GE understand that risk and are trying to model success in work-life programs. Many more companies need help to make programs work well.

Instead the average playground bench is crowded with untapped talent who want to work and parent. It is filled with restless, highly skilled and educated, underutilized professionals who've been forced to choose between kid and career. When they became parents, or soon after, they were automatically labeled as less committed. As an advocate for change in the workplace, I know we can't rely only on corporate policies to support working parents. We need legislation to protect us too.

It's time for change. I am lucky to live in a state where we have a chance to make history on this issue and many others that affect me as a parent, as a professional and as a woman. This November 4th, a vote for the Women's Equality Party is a statement of support for candidates who are committed to ending discrimination against working parents. The Women's Equality Party platform will address ten issues that are standing in the way of our advancement, not just as a gender but as a democracy.

I am proud of this platform and of the candidates standing up to support equality for all women in New York. New Yorkers, join me on November 4th to make history by voting the Women's Equality Party line. 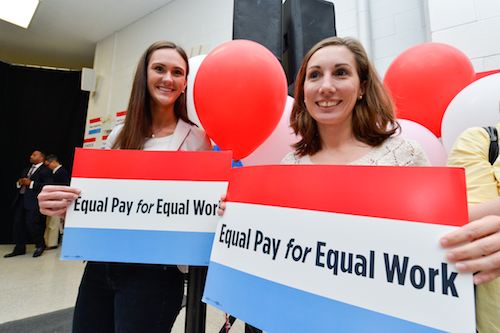