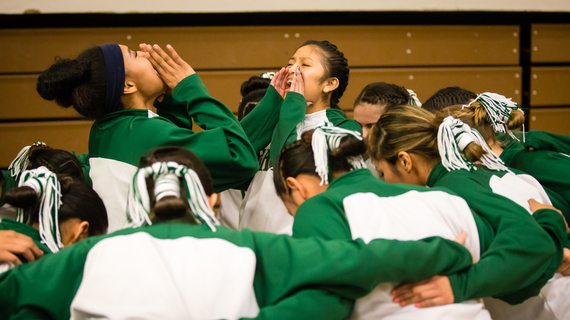 Racial discrimination hit the Native American community once again at a recent basketball game in Arizona. This time, non-Native referees officiating a ladies basketball game prohibited the Flagstaff High School varsity girls from wearing their hair in a Navajo traditional bun, called a tsiiyéél, due to a perceived violation of the Arizona Interscholastic Association (AIA) rules on "hair control devices."

The game concluded the school-wide Native American culture day, a day when numerous Native American cultural activities take place that recognizes and honors Native peoples and traditions. The Flagstaff Lady Eagles Basketball Booster Club, comprised largely of parents and community volunteers, spent hours prior to the game preparing the green and white yarn ties for each player's tsiiyéél. Members of the team, non-Navajo and Navajo, entered the gym with their hair wrapped in the Navajo traditional hairstyle. Before the buzz of the scoreboard ignited tip off, an AIA official ordered each girl to undo her tsiiyéél on the grounds of violating perceived rules and safety regulations. Some of the Navajo players admitted they were, "embarrassed" because they felt targeted and unfairly banned from wearing their hair in a way that they believed symbolizes focus, strength, and recognizes the beauty of Navajo culture.

Unfortunately, this is not novel news, too often following the "rules," "codes," and "policies" negatively targets Native American youth and their community cultural values.

Christian Titman, a member of the Pit River Tribe, was restricted from attaching an eagle feather to his graduation tassel in California. His high school, part of the Clovis Unified School District, had a strict graduation dress code that denied adornments such as leis, rosaries, and necklaces worn by students during graduation ceremonies. Only after suing the California school district for violating his right to freedom of expression and religion, Christian was granted permission to wear an eagle feather.

Hayden Layne, a member of the Delaware Tribe of Indians, was also denied permission to wear an eagle feather during her graduation ceremony in Oklahoma. The Caney Valley School District cited the feather violated school policy which exists to ensure students don't "ignite controversy" with inappropriate decorations. A federal judge agreed with the school district in May of 2015 and Hayden did not wear the eagle feather during graduation.

In support of the Flagstaff Lady Eagles, days later the Dulce High School girl's basketball team in New Mexico took to the court wearing a traditional tsiiyéél. They were also told by referees that, "the way they were wearing their hair was wrong."

These scenarios are occurring in school settings, where Native students are often the lowest performing group when compared to the dominant White population. However, research demonstrates that when Native American students draw on their cultural beliefs, they excel academically and gain a stronger sense of identity that in turn pushes them to be positive and successful members of society.

Proponents of such policies often cite the need to protect students. However, in an effort to create and maintain safe and welcoming school environments, who is truly being protected? In these cases, Native American cultural values are not. Rather, dominant Eurocentric values are.

In a country with a history of purposeful and often violent cultural eradication, the racial targeting experienced by the Native communities in Arizona and across the nation highlights continued discrimination against Native youth and their expressions of cultural pride. Rules, codes, policies must not restrict and devalue the cultures of diverse peoples.

At a national White House conference for Native American youth, First Lady Michelle Obama acknowledged a history of blatant discrimination through regulations that made Native cultures illegal. "Your traditions were systematically targeted for destruction." At this convening, she publicly recognized SaNoah Larocque, a member of the Turtle Mountain Band of Chippewa and an undergraduate student at Harvard College, for successfully appealing to her high school in order to wear an eagle feather on her graduation cap.

As people across the country show their solidarity by wearing tsiyééls, we challenge decision makers to review and modify existing policies that discriminate and devalue the culture of our Native American youth.