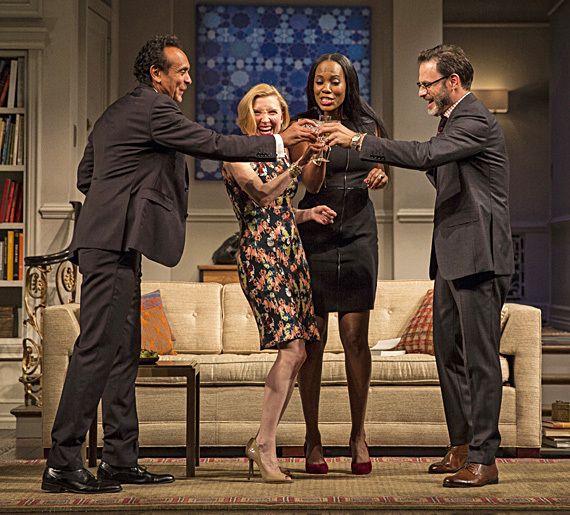 A toast among friends: from left, Bernard White as Amir, Nisi Sturgis as Emily, Zakiya Young as Jory and J. Anthony Crane as Isaac

Could any work of dramatic art be more timely, more provocative, more ripe for debate right now than Ayad Akhtar's Disgraced, which is receiving a sterling production at Berkeley Rep? That would be hard to imagine.

Coming against the backdrop of the terrorist trauma in Paris last Friday, which took place just hours before the play's official opening, the drama raises issues and puzzles that no thinking person can ignore. They involve the nature of Islam, the perception of Islam by followers of other religions or of none, the hostility between Muslims who view their faith through disparate lenses, and the persistence of beliefs and traditions that may linger in individuals who try to abandon the faith in which they were raised.

That's a huge burden for a play to carry, but Disgraced shoulders it handily, with perceptions that only an insider can possess, along with fury, wit, compassion and superb theatrical craftsmanship. The 90-minute drama brought Akhtar the 2013 Pulitzer Prize, among other awards. He has also won recognition as a novelist (American Dervish), a screen writer and an actor. 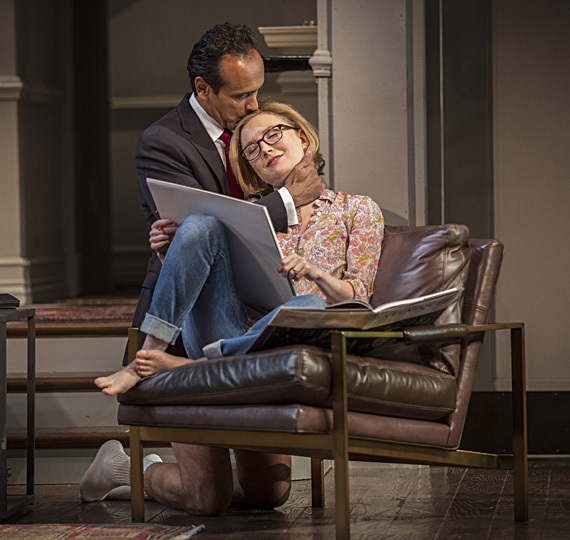 A secular Muslim -- his own term -- Akhtar is about half-way through a seven-part examination of Muslim experience in America. After the horror in Paris and the worldwide response that has followed, that already complex task will undoubtedly take on new and more difficult dimensions.

Disgraced revolves around a man whom observant Muslims would call apostate. Named Amir, he has not only denied his Pakistani roots but also changed his last name and passed himself off as Indian to climb to the upper reaches of a high-powered law firm. The deception makes him something of an embodiment of another creed, a belief in the American dream, whose deities are wealth and status.

Amir (Bernard White) has become rich, as his $300 shirts attest, and socially assimilated, perhaps partly because of his marriage to a pale, blonde American artist (Nisi Sturgis). The fact that artist Emily is an admirer of Islamic art, which she emulates in paintings that have attracted praise from important critics, brings Amir no pleasure. 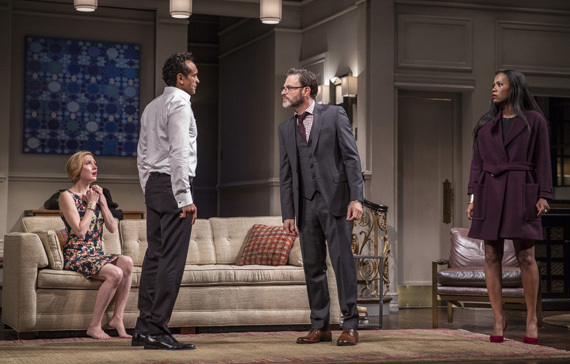 His view of Islam stems from childhood encounters with caustic attitudes and casual bigotry, among other affronts; she perceives Islam as represented by the beauty and wisdom of its art and artists, supported by sympathetic scholarship. Within a happy marriage, though, those differences amount only to a minor irritant.

The irritants grow deeper when Emily, a social idealist, persuades Amir to assist the legal team defending an imam that she feels was wrongly accused of financing terrorism. When word of his involvement in the case reaches the wrong people, his carefully constructed path to success crumbles.

The grim developments surface at a dinner party that opens on amiable terms and ends amid shouts, recriminations and revelations. The couple's guests in their opulent apartment are a museum curator, Isaac (J.Anthony Crane), and one of Amir's executive-suite colleagues, Jory (Zakiya Young). When conversation turns from chatter about art and food to religion and politics, doors open that can't be closed. Perhaps too conveniently, the group includes a Muslim, a Jew (Isaac), an African-American (Jory) and an Anglo, allowing sparks of unstated bigotry to sizzle into fiery confrontations.

The play's only other character calls himself Abe in an early scene and reverts to his birth name of Hussein by the drama's end, months later. Played by Behzad Dabu, he's a youthful nephew of Amir's who swings from estrangement from his religion renewed dedication, and clearly represents personal struggles that take place not only in Islam but in every religion.

Direction was by Kimberly Senior, who staged Disgraced in Chicago and New York, and obviously knows how to make every performance, every character and every scene click.

John Lee Beatty designed the beautiful and intricate set, with coffered ceilings and an outdoor terrace, which metamorphoses in seconds from lived-in elegance to the abject drabness of a home about to be abandoned.