It isn't every day that a first-time author gets to have breakfast with one of her icons--in my case, Gail Sheehy, the inimitable journalist and author of the revolutionary Passages, which the Library of Congress called one of the 10 most influential books of our time. Sheehy is a former Solo Mom who raised her daughter, Maura, on her own after divorcing her first husband. Sheehy was recently widowed, and much of her newest and most personal book, Daring: My Passages, is about moving on after the loss of her beloved husband, the legendary magazine editor and journalist Clay Felker.

I first met Sheehy while auditioning for the Jewish Book Council Tour in New York last year. I enjoyed a lengthier conversation with her when she came to Denver, my hometown, to speak about Daring. It took a little daring to introduce myself to her backstage and give her a signed copy of my own memoir, Both Sides Now: A True Story of Love, Loss, and Bold Living. I'd read that Joni Mitchell's "Both Sides Now" is the song that resonated most deeply for Gail, and given the obvious connection with my book, why not just share the song's impact on me as well? Nearly three decades separate us but Gail couldn't have been more gracious. So then I asked if she might meet me for coffee on a future trip to New York? Wouldn't you know Gail Sheehy invited me for breakfast at her West Side apartment.

Here are highlights of our conversation about love and loss, being daring, and following the path of bold living.

Q: I'm drawn to your theme of daring in part because I ascribe to a similar one--of bold living. I define BOLD as Beauty, Opportunity, Liveliness, and Daring. How do you define beauty?

A: What an interesting idea to make that your number one priority as you came back from tragedy. My husband, Clay Felker, had cancer four different times over the course of 17 years, with many joyful periods of respite in between. I told myself while he was sick, you must have one hour a day just for you. So I often went to the library and read a book. It wasn't enough to read a book at home, because the phone would ring. The library was a still and gentle environment, and also beautiful, because I love books around me.

Beauty to me means nature and being surrounded by life as it was before we turned into algorithms. We aren't algorithms. We are human animals! Being in the woods and seeing animals and nature up close always restores me and reminds me of how we can act in a more instinctive way. After Clay's second bout with cancer, he and I took long walks in Central Park and at The Nature Conservancy on Long Island. This was a time to enjoy each other's company and meditate about what would make him happy going forward. All those beautiful walks led to a new adventure. Clay established the Felker Magazine Center at the University of California in Berkeley, where he taught the next generation of journalists about the magazine industry. And I went on to write five more books.

Q: So, rather than staying put during his illness, you and Clay seized opportunities. You continued to make life happen.

A: That's right. All we had to do was tear up the life we spent 30 years building in publishing in New York City and move across the country! It was the best move we ever could have made. We were in an environment of total beauty; right outside our tiny academic residence was a running track that gave us a view of the San Francisco Bay, a view with no horizons. We were starting all over: We were young again, in love again, and giving back to a new generation of journalists. We had 10 of our happiest years in that beautiful environment.

Q: What's the first bold thing you ever did?

A: As I write in Daring, my grandmother and I used to listen to a radio show called Grand Central Station. Every episode began with the sound of a train rushing into Grand Central. So, when I was in seventh grade, I started sneaking off to the city by myself on Saturday mornings. I couldn't wait to take the train, run upstairs to the marble balcony, and look at all those private lives criss-crossing. I had a notebook and pencil. Then I would rush home and get on my typewriter to punch out stories of what I'd seen. I've been running off to chase stories ever since.

Q: How can widowed women put themselves on the path of opportunity?

A: You have to develop a habit when you are still in grief to actually go to the events that you are invited to by email, sometimes put on by organizations you know little about. Just the process of getting dressed up, putting on makeup, presenting a face to the world, talking to people, and having people talk to you and be interested in you, gives you a whole different picture of yourself than if you chose to sit inside and watch another series on Netflix. Some opportunity always comes from these occasions. Maybe you're asked to go to another event, join the board of an organization, or join a grief support group. Or maybe someone will even offer to help you set up a LinkedIn profile. By stepping out in life, you create a whole new support network.

A: Writing Daring has made me more daring in my life now. When I fear that everything will fall apart tomorrow, or that I'm never going to get a writing job again, I do something daring. I love being part of the world and part of the conversation. I'm driven by curiosity. I'd like to interview Vladimir Putin and Bibi Netanyahu. They are the kind of subjects that excite me.

Q: You are 77 years old. How do you see yourself today?

A: I'm a wise woman in a period of life where I'm free to do whatever I can afford to do. 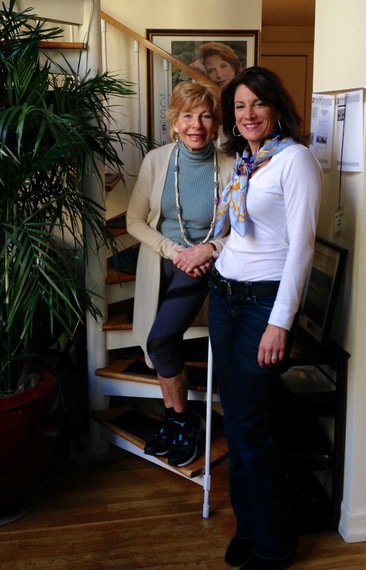