It's been a magical first month for the new Disney musical "Aladdin," which has packed the house and won over wary critics since its debut. The show's charm is twofold: it's a song-and-dance spectacular in the old tradition that happens to have one of the more diverse casts in Broadway history.

With, perhaps, one demographic exception. Months before the March premiere, a rumor circulated online that the 34-member cast includes no performers of Middle Eastern heritage. First posted anonymously on a theater blog by a self-identified Middle Eastern actor, the claim has since gone viral, gaining notice in recent weeks from sites like Racialicous and Jezebel. 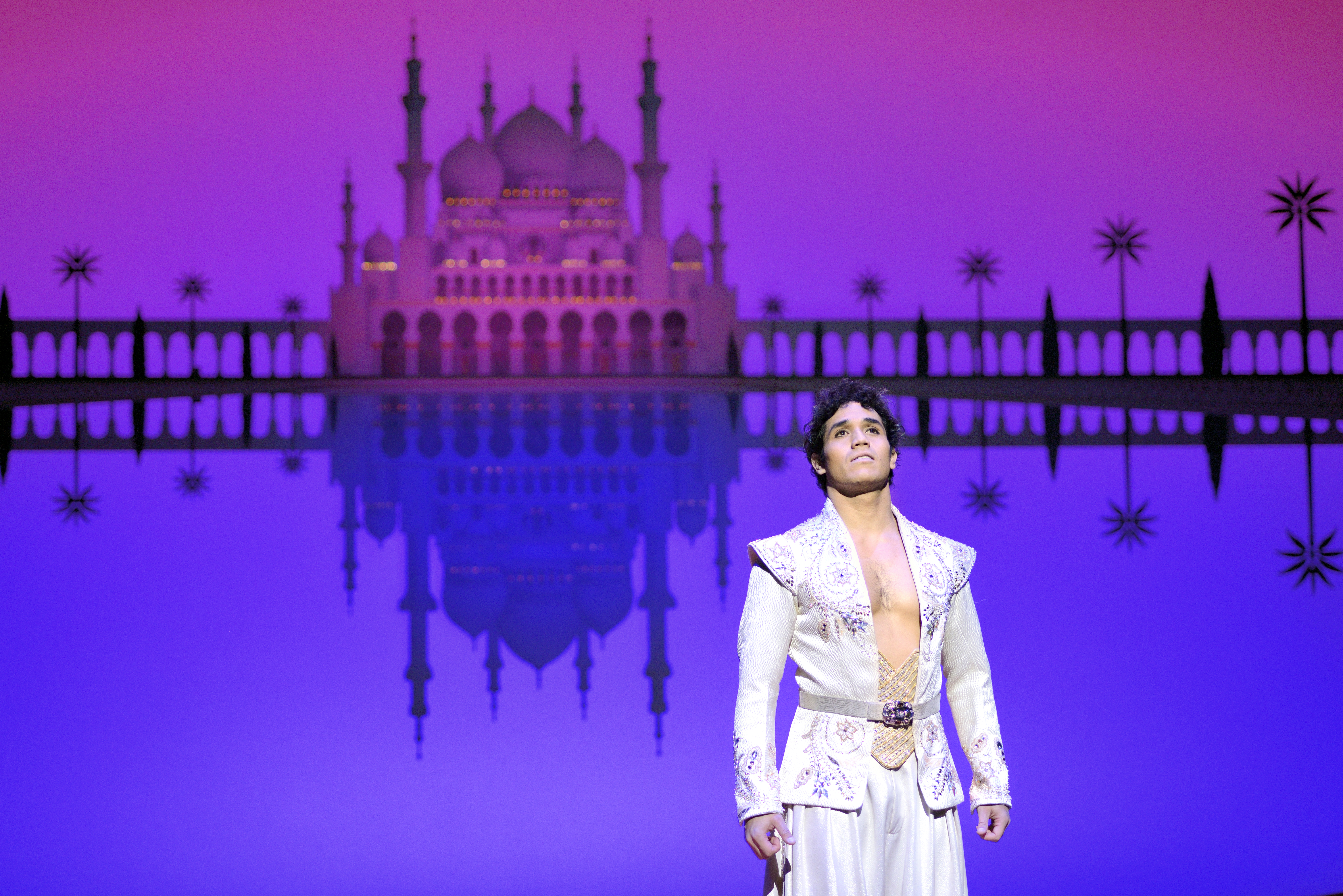 Actor Adam Jacobs, who played Simba in the Disney musical "The Lion King," is the star of "Aladdin." Photo by Deen Van Meer.

In an email to The Huffington Post, a Disney representative explained why the ethnic breakdown of the cast can neither be confirmed nor denied. Per the company's adherence to the policy known as "colorblind casting," ethnicity is left out of the casting process.

"Legally, the company is not allowed to ask potential employees about their ethnic background at any point during the hiring process," the representative wrote. "We encourage actors of all cultural backgrounds to audition for our shows and are fiercely proud of our talented and diverse cast."

Still, since auditions launched, the American Arab Anti-Discrimination Committee has been fielding complaints from actors and actresses, according to the committee’s national president, Samer Khalaf.

"This issue has always been there, in Hollywood and onstage, whether it's appropriate for people to play other ethnicities," Khalaf said. "To us, [the cast of 'Aladdin'] is problematic." 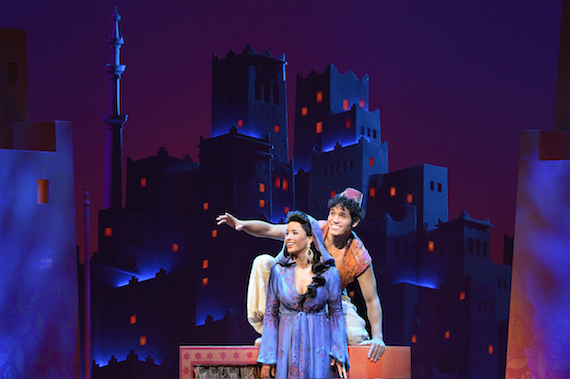 Critics of colorblind casting argue that the practice exacerbates, rather than corrects for, the demographic imbalances that already exist in the world of theater.

According to a recent study of prominent New York theaters by the Asian American Performers Action Coalition, Caucasian performers held 79 percent of roles during the 2011-12 season. Of the roles that did go to minority players -- a subset that includes Middle Eastern, Asian-American, Latino, African-American and disabled performers -- the study found that only 10 percent were "non-traditionally cast." In other words, roles that could have been filled by a performer of any background nearly always went to Caucasian actors.

What's more, the credo that drives colorblind casting -- that the best person for the job should win -- is open to interpretation. Take "The Lion King," another major film-to-stage adaptation by Disney Theatrical Productions. Casting policies notwithstanding, ethnicity ultimately mattered when Disney petitioned the Actors' Equity union to keep certain South African members of the cast in the country because of the "unique quality" of their accents, as reported by Playbill.

"Aladdin," on the other hand, is a tricky claim for any ethnic group to stake. Its sun-baked setting of Agrabah, after all, took shape in Hollywood, and the original tale itself is also thought to be a Western invention.

No reference to "Aladdin" appears in Islamic record until after the story was made famous by the French book One Thousand and One Nights, often called Arabian Nights. Compiled by Antoine Galland, a French scholar and traveler, the 17th-century edition remains the pre-eminent collection of what were previously scattered stories, many of them orally told.

One theory is that Galland heard the tale of Aladdin from a Christian monk who fabricated it. Another theory holds that Galland made up the story himself. Aladdin's standalone name is not typical to Islamic folklore, which tends to revolve around stock protagonists all titled some variation of "Clever Hassan," "Clever Ali" or "Clever Mohammed." Adding to the confusion, Galland set the action in China, a flourish that armchair scholars like to cite as further proof that the story belongs to no one.

Hasan El-Shamy, an Egyptian-American folklorist at Indiana University who has written extensively on Galland's translation, said the French writer's tale popularized harmful notions of Islamic culture that have thrived in the West for centuries -- "that [Muslims] are an unrealistic people, that they are violent, that they are superstitious," he said. (The Chinese setting, he added, can be seen as an Oz-like backdrop: Just as Dorothy and the Wicked Witch of the West both speak English, Galland's characters are all meant to be Arabs no matter where they are.)

Critics of the 1992 movie attacked many such points, partly succeeding in canvassing Disney to change lyrics in the opening song, "Arabian Nights." A reference to ear-shearing was dropped, but the word "barbaric" was kept, because, a Disney executive told the Los Angeles Times, it referred to "the land and the heat, and not to the people."

The musical reflects these edits and more. Instead of what the Arab-American journalist Jack Shaheen termed the "shady-looking storyteller" who opens the movie, narrative duties in the musical go to the genie, played by the African-American actor James Monroe Iglehart. In one of many self-referential asides in the script (written by Chad Beguelin of Broadway's "The Wedding Singer"), Iglehart describes Agrabah as a "fictional" land where "everyone has a minor in dance." 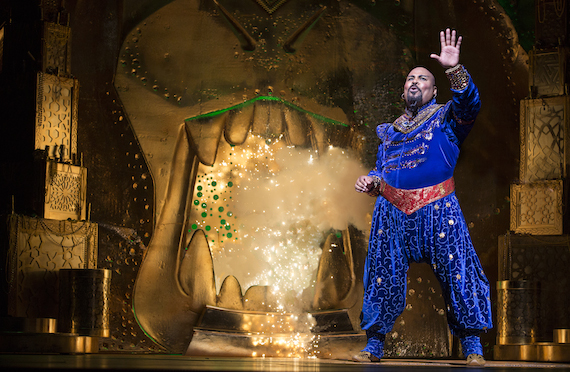 James Monroe Iglehart, as the genie, functions as both narrator and comic relief.

"The tone has changed a lot," Mahyad Tousi, a script consultant for the musical, told HuffPost. "What was inherently violent about the residents of Agrabah, who were all a bit cynical and angry [in the 1992 film] -- those things are all gone."

In an email with HuffPost, representatives from Disney protested the theory floated by British theater director Jamie Simmons that consultants with knowledge of Middle Eastern culture weren't hired to address sensitivity. Among those brought in, said the Disney reps, were the scholar and writer Reza Aslan and the producer and cinematographer Mahyad Tousi, who owns the New York-based "storytelling factory" BoomGen.

Even so, the show's producers missed "an opportunity" by hewing so strictly to Disney's casting policy in this particular case, said Sharon Jensen, executive director of the Alliance for Inclusion in the Arts, a minority rights organization.

"For people who are Arab-American or Persian-American or Turkish-American, the opportunities are still so few. With very few exceptions, they are still limited to stereotypes," Jensen said. "It seems to me, where there's an opportunity to open things up artistically, you should."

Jensen's reading echoes the sentiment that set the controversy off. "I was ecstatic," wrote the anonymous actor who first publicized the casting issue last fall. "Middle Eastern actors would have the opportunity to play a wide variety of roles: the ingénue, the hero, the villain ... instead of the stereotypical roles we are always cast in: the taxi driver with one line, the belly dancer with no lines."

Instead, the revived Alan Menken song about the hero and his buddies, "Babkak, Aladdin, Omar and Kassim" -- which never made it into the 1992 film -- is now staffed, respectively, by Brian Gonzales, Adam Jacobs, Jonathan Schwartz, and Brandon O'Neill.

"It's like doing 'West Side Story' and having no Latinos," Khalaf said. "Would that be okay with the Latino community?"