A buck-toothed, squinty-eyed Chinese cook. A pickaninny centaurette who shines hooves. A tar baby. A red-faced Indian Chief who says "Ugh" and "How."

What do these characters all have in common? They were created by Walt Disney Productions artists for inclusion in feature-length animated films that this Studio released in the 1940s and 1950s. But as America's attitude toward racial stereotypes began changing as the country entered the 1960s, Disney started making trims to the productions that these controversial characters appeared in. And in the case of 1946's Song of the South (i.e. the live-action animated Academy Award-winner which served as a precursor to Disney favorites like Mary Poppins, Bedknobs & Broomsticks and Pete's Dragon), it's been a quarter century since that movie was last shown theatrically in the United States.

And even though stateside animation fans regularly make appearances at Disney's annual meetings and plead for this film to be released on Blu-ray & DVD (At this year's meeting of shareholders in Salt Lake City, when the Song of the South re-release issue once again came up, Bob Iger mentioned that he & the members of Disney's board had been joking backstage. Wondering if they'd actually be able to make it through one of these proceedings without someone then asking about Song of the South), this film remains locked away in the Disney vault and is likely to remain there at least until Iger exits the Walt Disney Company in 2016. 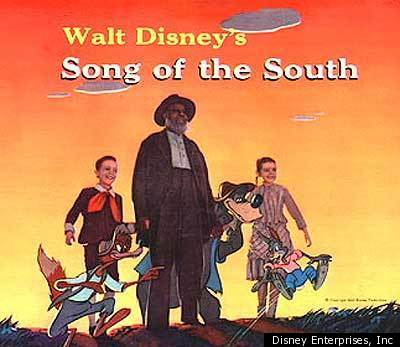 "Given how often this question has come up, Bob has personally looked in the Song of the South re-release issue a number of times now," said one Disney insider. "He's watched this film in its entirety at least twice over the past 7 years. And each time Iger has comes away from this viewing experience thinking that it would be a waste of Company resources to release this title through the Studio's home entertainment division. That while completists would obviously be thrilled to finally be able to add an official Song of the Song DVD & Blu-ray to their animation collections, a far larger segment of American consumers would -- to Bob's way of thinking, anyway -- be upset that Disney was putting a film out there which then showcased African-American stereotypes from the 1940s. And since a controversy like that might then compel consumers to avoid buying other Disney products... This is just one of those situations where it makes far more sense to err on the side of caution and keep Song of the South stashed away, out of sight."

Of course, what's kind of ironic about this whole situation is that -- while you can't buy an official Disney-produced Blu-ray or DVD version of Song of the South -- bootlegs abound on eBay. What's more, you can watch this film in its entirety on YouTube.

Or -- better yet -- if you want to own the tar baby himself, you can always place a bid on Lot 51 in S / R Laboratories' Fall 2011 animation art auction. Which (provided that you win, of course) will then make you the proud owner of a pastel & charcoal storyboard that was actually used in the production of this 1946 Walt Disney Productions release.

Paging through the catalog of S/ R Labs' latest animation art auction, you can watch as not only The Walt Disney Company but indeed all of Hollywood gradually grew more enlightened when it comes to the issues of race & stereotype. From the black-faced version of Disney's corporate symbol who appeared in the Studio's 1933 animated short, Mickey's Mellerdrammer to the buck-toothed, squinty-eyed Chinese cook that Walt wanted to use as comic relief in the full-length animated version of Peter Pan that Disney originally planned to produce in 1940, you can see that artists at that studio happily mined racial stereotypes in an effort to add additional humor to projects which were then in development and/or production. 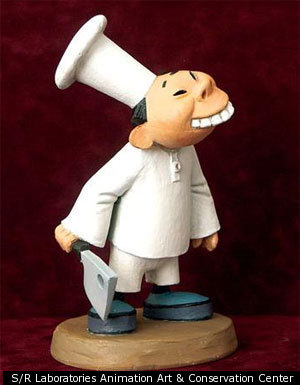 But in the post-war years, Walt Disney Studios (like much of the entertainment industry back then) slowly began evolving. Recognizing that there were some members of the movie-going audience who might be offended by such an obvious racist caricature, that Chinese cook character which was initially proposed for Disney's version of Peter Pan was nowhere to be found when this animated feature was finally released to theaters in February of 1953.

Mind you, this was kind of a two-steps-forward, one-step-back process. And while Disney is to be applauded for deliberately making an effort not to offend Asians with this particular animated feature, Disney's Peter Pan still features Tiger Lily's big-nosed, red-faced father, the Indian Chief. Not to mention that now-cringe-inducing song "What Makes the Red Man Red?" Which features far-from-PC lyrics like:

When did (the Red Man) first say, "Ugh!"
In the Injun book it say
When the first brave married squaw
He gave out with a big ugh
When he saw his Mother-in-law

To be fair here, Walt Disney Productions did attempt to stay ahead of the curve when America's attitudes towards race began changing in the 1960s. And -- when prompted by negative public responses -- would move quickly as possible to address these issues.

In fact, according to what studio veterans have told me, it was the complaints that Disney received in regards to the 1963 re-release of Fantasia about Sunflower (i.e. that pickaninny handmaiden who braided the tails & brushed the hooves of the centaurettes who appeared in that film's "Pastoral Symphony" sequence) that prompted the Studio to cut this character out of in that animated feature. Not to mention significantly trim back the two zebra centaurettes who attend to Bacchus in this same sequence.

Of course, some might argue that The Walt Disney Company has now gone too far. From the scene where Pecos Bill first rolls and then smokes a cigarette in 1948's Melody Time which has since been cut out of any subsequent DVD & Blu-ray release of this anthology feature to that time where Disney -- at great expense -- reframed several scenes in The Lion King (So that -- when the VHS version of this 1994 theatrical release finally hit store shelves -- the hyenas who were parading in front of Scar in that animated feature's "Be Prepared" number wouldn't look quite so much like Nazi stormtroopers passing in review for Hitler), that the Mouse is making too big an effort these days to be PC.

But then -- given that Disney's films are predominantly aimed at the family audience (More importantly, that the Company's own research shows that once a family purchases a particular DVD & Blu-ray, the younger members of that family will then watch this same Disney movie over & over. Sometimes as many as 30 or 40 times) -- you have to ask yourself: What's the socially responsible thing for a multi-national corporation like Disney to do in a situation like this? Keep potentially offensive films like Song of the South locked away in the Disney vault while, at the same time, producing brand-new animated features like 2009's The Princess and the Frog? Which -- in direct contrast to kindly, old, somewhat-subservient Uncle Remus -- features a far more positive African-American role model, Princess Tiana?

More importantly, it's worth noting here that -- while The Walt Disney Company still isn't ready to release Song of the South stateside through its home entertainment division -- the Mouse has made an effort to make sure that this 1946 Academy Award-winner is being properly preserved for future generations. As part of their on-going scanning project with the Library of Congress, Joe Jiuliano (Who's Disney's director of Film & Video Services. More importantly, the technical adviser for the Studio's restoration committee.) and his team made a new black-and-white successive exposure negative of Song of the South. Which -- along with the new safety negative that they just shot -- guarantees that this somewhat controversial film will be preserved for another 100 years.

Hopefully, long before that, the Mouse will figure out a way to make an officially-Disney-sanctioned version of Song of the South available for purchase by animation fans without offending the rest of the Blu-ray & DVD buying public. In the meantime, if you'd like to get a sense of how far The Walt Disney Company has come in regards to using racial stereotypes in its animated features & shorts, be sure and head over to the S / R Labs website. Where you can then view some of the more controversial pieces of animation art which will be coming up for bid later this week.

Jim Hill is an award-winning entertainment writer who lives in New Boston, N.H. Over the past 30 years, he has interviewed hundreds of veterans of the animation and themed entertainment industry and written extensively about The Walt Disney Company.

Jim is currently working on a behind-the-scenes history of the development and construction of Disneyland. For his more immediate musings on movies, TV shows, books and theme parks, please check out his blog, jimhillmedia.com.