Did Mr. Incredible work in Chicago's Loop? Was Andy from "Toy Story" a small-town Ohio boy?

A sprawling new worldwide map (embedded below) would indicate as much, tying the most popular Disney and Pixar films to points on the globe.

The cartographic feat is the handiwork of "art hobbyist" and self-described Disney fan Eowyn Smith, 26, who told The Huffington Post "the map grew into this fun project trying to locate where all the movies took place."

Smith wrote that with several movies, like the New Orleans-set "Princess and the Frog," the locations were clearly stated, while others took "quite a bit of digging."

For some films like "Bambi," Smith honed in on a region -- Northern U.S. or Canada where you can find white-tailed deer -- while for others, like "The Incredibles," Smith determined were set in a specific city (Chicago) due to distinguishing features like elevated trains, street design and the waterfront.

Smith said she re-watched the movies to pick out clues to their location based on wildlife, backgrounds or landscapes and then compared them to the real world.

"I made my final selection based on what location made the most sense given all the data. And in a few cases, I had to consult the original source material the movie drew upon," Smith said.

Since posting the map to the community art sharing portal DeviantART earlier this week, Smith's work has already spawned more than 1,200 comments, many of which the artist says helped her refine some of her earlier choices.

"The online community has also been an amazing source of help," Smith said, noting viewers have pointed out details she missed or offered sources of information that supported or refuted some of her earlier placements. 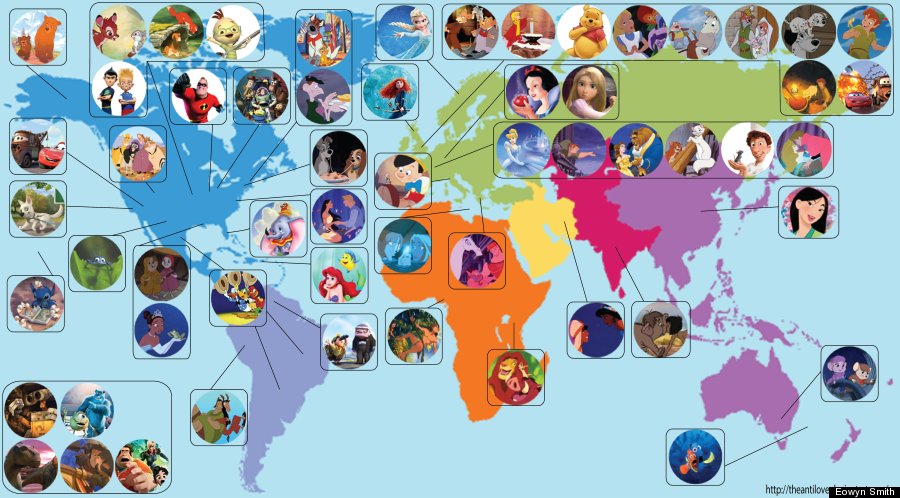 Finding Your Disney Side (At Any Age)