When the latest trailer for "Maleficent" called its title character "Disney's greatest villain," we couldn't help but scratch our un-horned heads. Maleficent is great and all. She's got the whole "evil as other" archetype working in her favor and those horns are really so McQueen, but there are a TON of antagonists who could easily contest that title. Now, in celebration of all that is evil, we bring you a complete ranking of 25 classic Disney villains.

25. Edgar Balthazar, "The Aristocats"
Edgar Balthazar plots to eliminate Duchess and her aristo-kittens, when he learns that his boss Madame Adelaide de Bonne Famille will be leaving them her fortune. It's unclear exactly why Edgar thinks he as Bonne Famille's butler would logically or legally be next in line for the inheritance. Nonetheless, he sets off on attempting to ship the cats off to Timbuktu, and ends up getting shipped to Timbuktu himself (read: is defeated by a bunch of little cats). 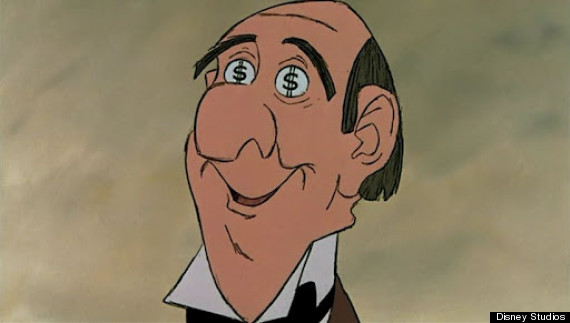 24. Clayton, "Tarzan"
Intended as a statement on poachers and imperialism, Clayton mostly comes off as a lazy mix of Gaston and Cruella (bro-y bravado + animal cruelty). In an alternate universe, he later gave up hunting to be a sportswriter for ESPN. 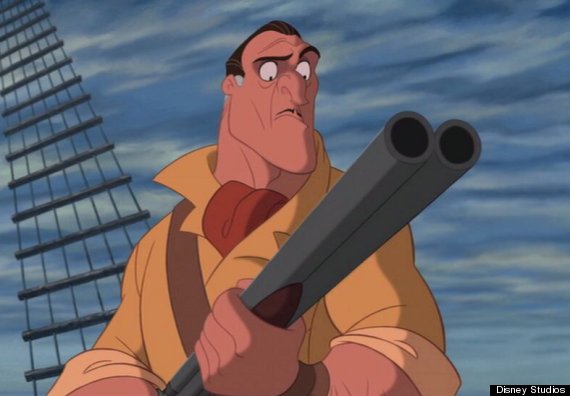 23. Prince John, "Robin Hood"
As greedy as Prince John is, at the end of the day, he's an anthropomorphic cat with mommy issues. Yeah, he could probably eat you alive, but the oversize coat and crown mostly make him look like a stuffed animal playing dress up. This is why someone wearing little tights can steal from you, Prince John. Do better. 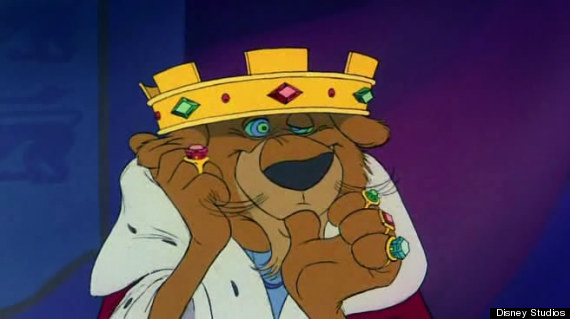 22. Si and Am, "Lady and the Tramp"
Cats verses dogs is basically as iconic an archetype as good verses evil. In hopes of being manipulative and terrible, Si and Am are basically responsible for all of Lady's troubles in the film, an effort best demonstrated by their slightly offensive song of cultural appropriation and mischief. 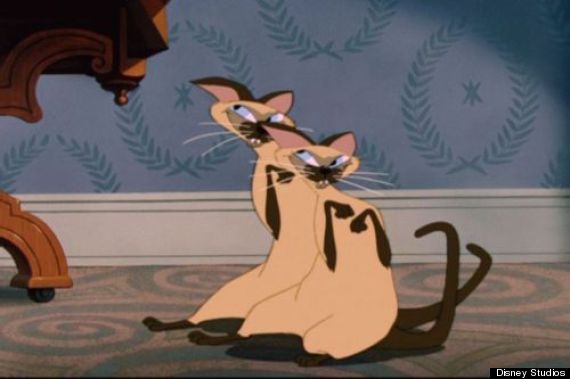 21. Madame Medusa, "The Rescuers"
At certain points in "The Rescuers," Madame Medusa definitely comes off as a bumbling idiot. For a lady who has somehow managed to tame not one, but two crocodiles to be her pets while developing an impressively nimble affinity for water skiing, you might think Medusa would have a certain cleverness about her ... although apparently not enough to avoid being tripped up by a couple of well-prepared mice. 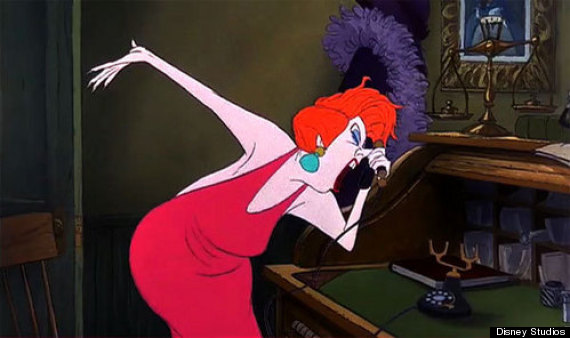 20. Man, "Bambi"
Yeah, he's an off-screen villain, but he kills Bambi's mother, you guys! Runner Up: the Forest Fire. 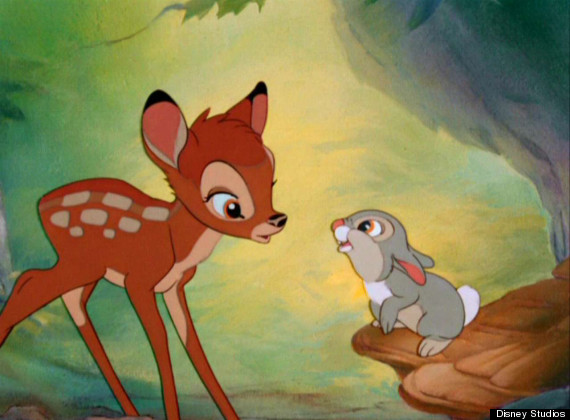 19. Madam Mim, "Sword in the Stone"
Despite the fact that she is really only a tertiary character, Madam Mim makes a major impression in "Sword in the Stone." She looks tiny enough to be punted across a soccer field, but her powers supposedly rival those of Merlin. Also, she easily transforms into a massive dragon. 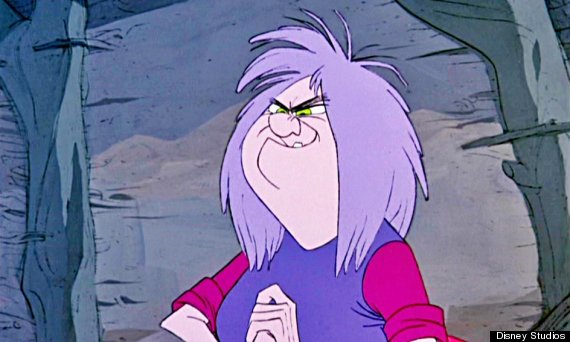 18. Foulfellow & Gideon, "Pinocchio"
It's really not very hard to trick a puppet into being an actor and / or going on roller coasters at a place called "Pleasure Island." Foulfellow and Gideon are not so much powerful as much as vaguely clever. But a fox and a cat drinking beer and using a cane as a stylistic flourish are not intended to be scary, so much as representations of the lingering temptation presented to all young children. 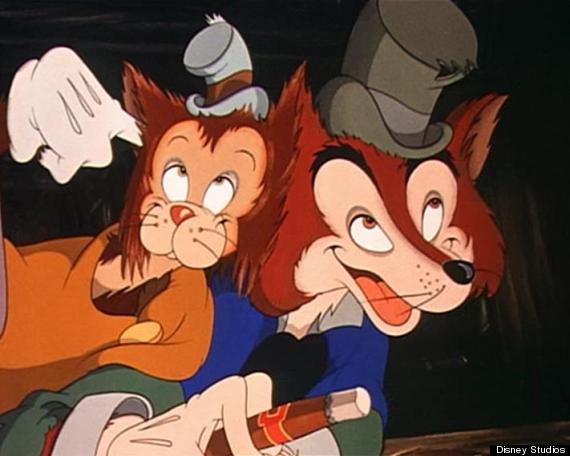 17. Shere Khan, "The Jungle Book"
Shere Khan is a known man-eater, who is similar to Hannibal Lecter in that he is especially articulate and polite in dealing with his victims. To be fair, he hates men, because they killed his entire family, but Shere Khan's cold, calculating methodology verges on sociopathy. Bonus points for having an affably precocious snake as his sidekick. 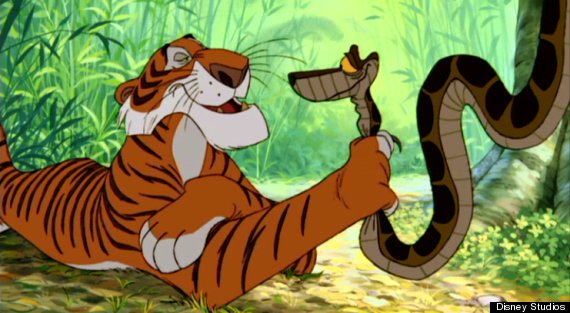 16. Governor Ratcliffe, "Pocahontas"
For someone wearing pigtails, Governor Ratcliffe was really not nice. In an obsessive search for gold, he exemplifies bigotry and xenophobia, while pillaging the land of Pochantas and their people, who are super peaceful and really just want to paint with all the colors of the wind. Speaking of colors, that outfit was a little flashy for someone who historically would have aligned with Puritanism. 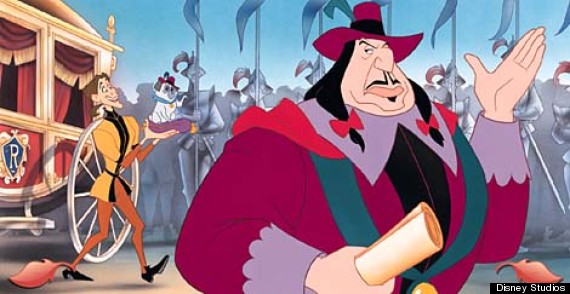 15. Captain Hook, "Peter Pan"
Hook hates children -- which, when a green-tight-wearing child has chopped off your hand and fed it to a crocodile, you're allowed to do. Apparently Hook's creators intended him to be a "black-hearted man," but he mostly just comes off as intensely silly. How could someone with such voluminous hair be evil? 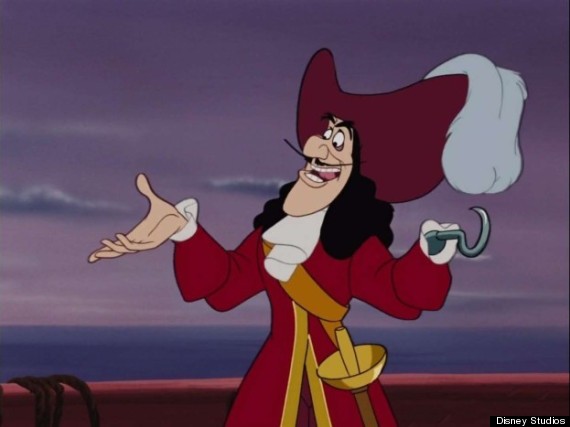 14. Ratigan, "The Great Mouse Detective"
Okay, Ratigan is awesome because 1) He is the anthropomorphic rat version of James Moriarty from "Sherlock Holmes," 2) He wears a cape, 3) He is a RAT that has a PET CAT. 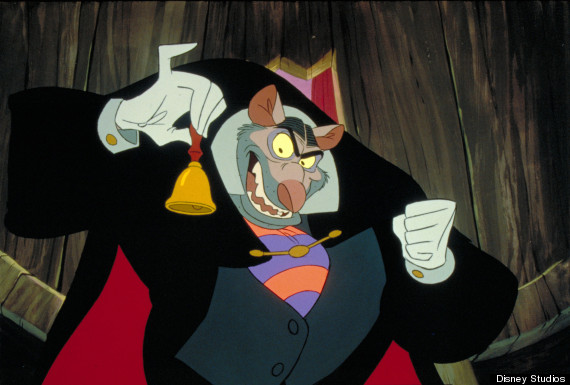 13. Shan-Yu, "Mulan"
Shan-Yu is big and scary and ruthless enough, but everyone knows the real antagonist in "Mulan" is the patriarchy. Don't send someone daughters, when they ask for sons and all that. In terms of powers, Shan-Yu is technically mortal, but appears to boast super human strength and enough endurance to emerge from an avalanche basically unscathed. But this Genghis Khan impersonator is really more of a symbol of the effects of war and constrictions of Mulan's social milieu, both as a civilian and and a warrior. 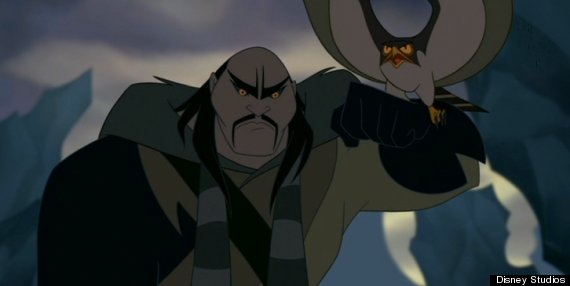 12. Maleficent, "Sleeping Beauty"
Maleficent has a seemingly unlimited arsenal of powers and really only curses Princess Aurora, because she's not invited to a christening. (Christenings are boring, so she should have been thankful that she didn't have to sit through a royal baby bath, but alas.) Being excluded is a major impetus for Maleficent's evil. When you're marginalized for having great cheek bones / being green, it only makes sense to lash out at a overprivileged infant. 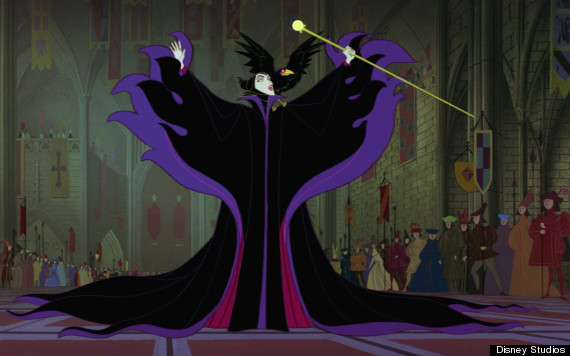 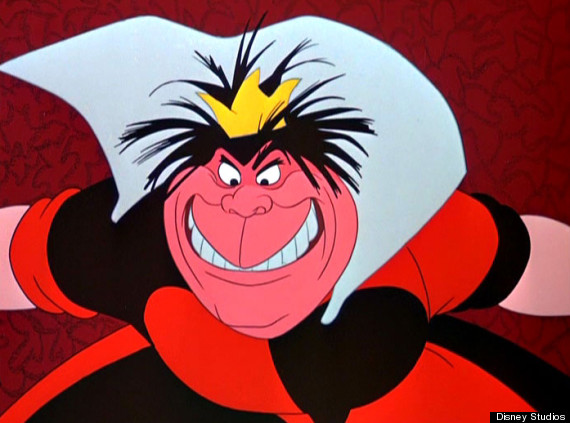 10. Claude Frollo, "The Hunchback of Notre Dame
"The Hunchback of Notre Dame" was definitively dark for a Disney film, the kind of thing your mom maybe wished she didn't take you to see in theaters ... and a lot of those sexualized evil undertones / general hellfire was perpetuated by Claude Frollo. Don't be fooled by the stupid hat, the Minister of Justice thought nothing of locking a baby in an attic and considering burning down "all of Paris" just to find a gypsy that he has a crush on. 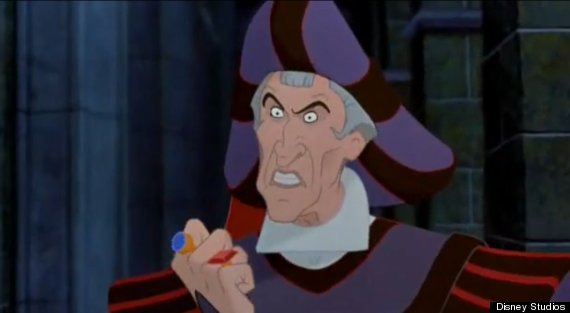 9. Hades, "Hercules"
Hades is so campy, it's easy to forget he's the god of the underworld, acting as Hercules' sworn enemy. Really, it's a challenge to have any character be voiced by James Woods and still make them seem genuinely malevolent, but it works. Despite his grand plot to overthrow Zeus' throne, Hades takes the shape of a trickster-type character with serious anger management issues. He also gets points for having a theme song that sounds like it cold have been written by Mumford and Sons. 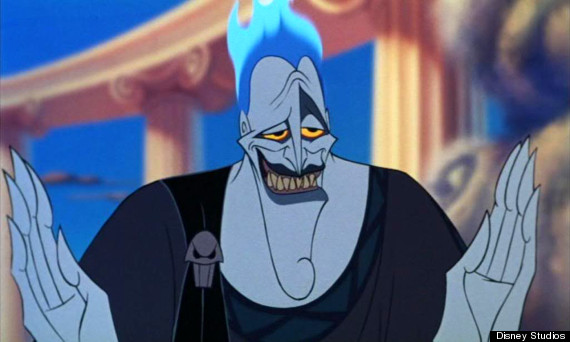 8. Gaston, "Beauty And The Beast"
Gaston is basically the quintessential bro, which really makes him more aggressively intolerable than horrifying. He works out too much (or at least eats too many raw eggs?) and thinks he is literally "the greatest hunter in the world." Interestingly enough, he doesn't seem super evil until much later in the film, when he decides to deliberately incite hysteria and lead a pitchfork mob to "Kill The Beast." #YOLO #ragespiral #comeatmebro 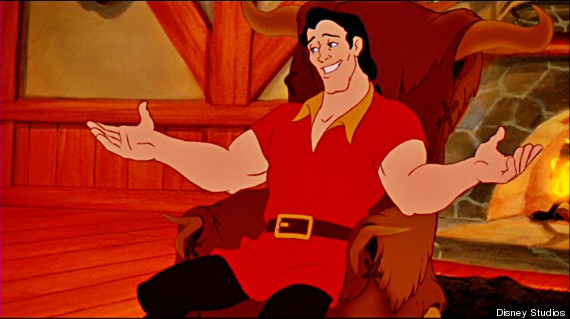 7. Queen Grimhilde a.k.a. The Evil Queen, "Snow White"
The Evil Queen is so iconic that she doesn't really need a name. Probably the best part of her backstory is the frivolity of her Snow White vendetta. She literally destroys some chick's life, because she wants to be the fairest of them all. Despite the fact that a boyfriend and / or manservant with a penchant for flattery could have avoided the whole mess she caused, the Evil Queen and her penciled-on eyebrows made for a sleek and chilling villain. 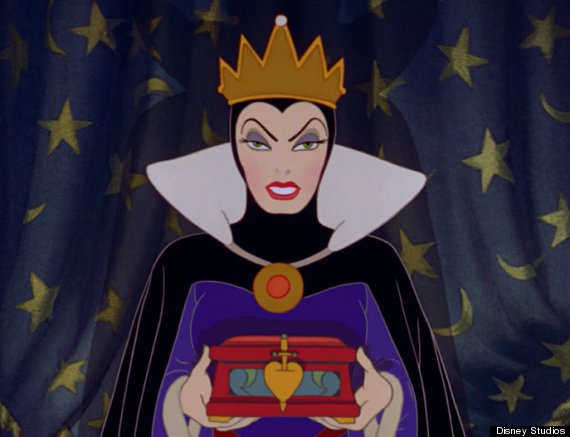 6. Jafar, "Aladdin"
The Royal Vizier of Agrabah is an amoral psychopath. With no understanding of remorse and a penchant for pure evil, he is perhaps more consistently evil than his villainous brethren. Essentially, his entire goal is to trick Jasmine into being his slave queen, only so that he can kill her and take the throne. Yet, despite all of the unabated maleficence, there is something vaguely comical about his sense of humor and enduring flair for sarcasm, executed flawlessly with the help of his sidekick parrot Iago. 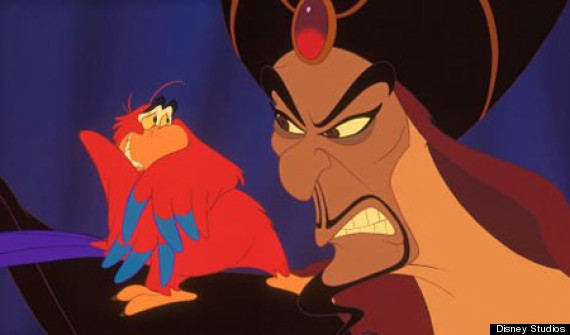 5. Lady Tremaine a.k.a. Wicked Stepmother, "Cinderella"
No super powers here, just one super mean lady. Much like The Abominable Snowman, the wicked stepmother would probably have been much nicer if that dress had a less aggressive neck line (itchy!). She never abuses Cinderella physically, but the extent to which she harasses her psychologically gets pretty creative. Although, minus the whole forcing-her-to-clean-cinders thing, Lady Tremaine had at least some right to be annoyed that Cindy made her own daughters seem even more shrill. 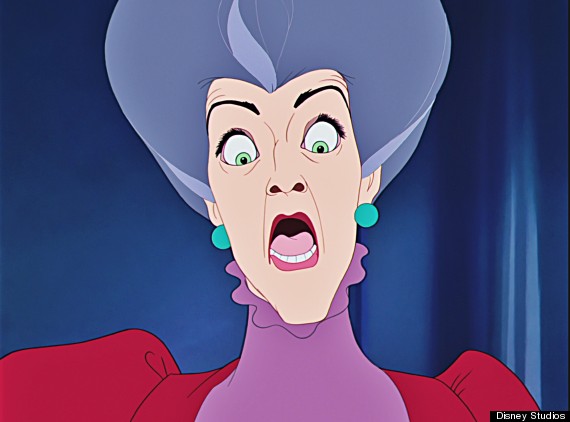 4. Chernabog, "Fantasia"
Chernabog is just, like, literally the stuff nightmares are made of (especially if you were under the age of 8, when you first watched "Fantasia"). His appearance is somewhat brief, but it comes at the climax of the film, represented by what is easily the most terrifyingly sinister theme song of all the Disney villains combined. Basically, the big bog would win versus anyone in a cage fight. 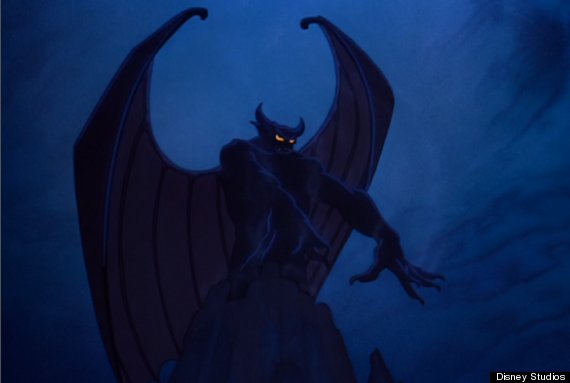 3. Ursula, "The Little Mermaid"
The sea witch of Hans Christian Andersen's "The Little Mermaid" (upon which Ursula is based) is merely an enabler in Ariel's eventual tragedy, whereas Disney's voluptuous reworking comes complete with two eel sidekicks, a self-serving agenda and an evil laugh heftier than a bowl of New England clam chowder. Of course, she tricks Ariel into a terrifically unfair deal, but at least our little mermaid didn't end up turning into those ambiguous little sea bugs that she just calls "Poor Unfortunate Souls." 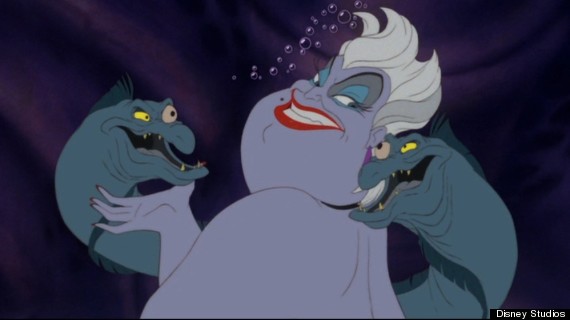 2. Cruella de Vil, "101 Dalmatians"
While demons are most often associated with head-spinning and excessive vomit, Cruella de Vil did her best impression of a hell beast, while managing to appear just as fabulous as a skeletal high-power fashion editor. She isn't a calculating villain like the rest in the Disney canon, just an impulsively stylish lady, who really doesn't mind skinning 101 puppies to look good. 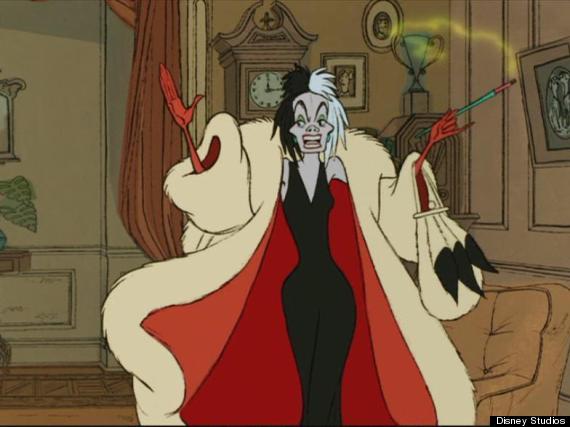 1. Scar, "The Lion King"
Scar is obviously resentful of Mufasa and Simba's ownership of the throne, but when he finally murders Mufasa via stampede, banishes Simba via manipulation and gains control of Pride Rock, he actually just destroys the land. Even his Hamlet doppelgänger King Claudius was less ruthless than that. Really, Scar is just full-throttle evil, but at the very least he was elegant enough to providemusical foreshadowing. Really just never trust a lion with an English accent. 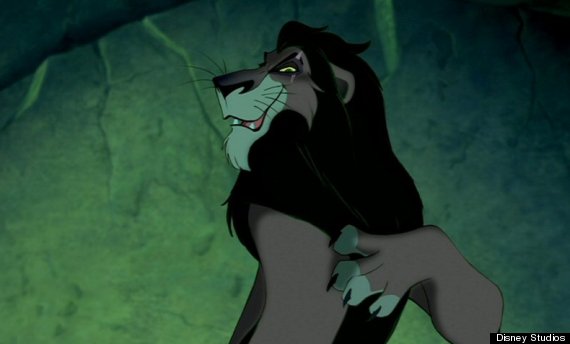