"If you had a chance to change your fate, would you?" Merida asks us in her Scottish accent.

Lately, it seems the question isn't can you change your fate, but this: Can you Barbie-fy Merida? Is that really happening?

But before I get to what I experienced first-hand at Walt Disney World and Merida's official coronation on Saturday, here is some background.

I have two little girls -- two little red-headed girls, in fact -- and both absolutely swoon over Merida. Especially my 4-year-old. Ironically, last summer when my youngest was just 3, we went to the movies to see Brave and ended up leaving a few minutes before the ending because they both were terrified. But their love for Merida never wavered.

It's primal, really, when little kids fall in love with fictional characters. My now-4-year-old instinctively knows she loves Merida to the core. She is spunky and feisty. Merida is definitely spunky and feisty. She is brave and strong. My little one is brave and strong. She is confident and smart, my little one is also confident and smart. And I secretly fear, much like her idol Merida, she will defy me at every turn when she reaches the tween-teen years. I sat through Brave last summer wondering if this was foreshadowing my future -- minus me being able to catch a fish with my paws when I am turned into a bear.

But when it comes to their favorite characters, little kids can't eloquently articulate why they love that character -- they just know. That princess IS them. After Christmas, my little one wore her Merida dress to its threads. She slept in it, she wore it to school, she wore it at home. It's now ripped, torn, dirty and it is part of her. It is perfectly Merida, really.

So, when the news broke on the eve of the Disney Social Media Moms conference, which I attended, that Disney was going to change the way Merida looks, my blood boiled. I first spotted it on the A Mighty Girl Facebook page. Then came the Change.org petition with the image of the shocking transformation of Merida from sassy and child-like to glittery, adult-looking and Barbie-like in physique. Worse, the image showed Merida in the very dress she hated, now almost glittery and sparkling. I couldn't believe what I was seeing. I was incredulous. I shared the Change.org petition on my blog Facebook page and I signed it.

But I also kept wondering -- is this true? Doesn't Disney risk LOSING money by so dramatically changing the brand of Merida? And Disney is a lot of things, but they are also a corporation trying to make money. Lets be realistic here.

Frankly, as my head was swirling with all this news, I couldn't believe my luck that I was headed straight to Disney World with an exclusive invitation to attend Merida's coronation on Saturday. I was determined to find the right person to talk to and ask about Merida's change, even if it meant ruining my reputation and never being invited back to the Disney conference again. Merida is important in our house, so I had to find out what was going on.

The conference began last Thursday night and it wasn't until Saturday morning that I had the chance to find the right person to talk to about Merida -- and to find out if it was all true. Along the way, I followed all the articles about Merida and tracked the growing list of signatures on the Change.org petition.

Was it true, I asked? Could they really be dramatically changing this new character -- the soon-to-be-official 11th Disney princess -- who was blazing a new path for Disney princesses?

Shortly before the official coronation of Merida in the Magic Kingdom, which took place at the base of Cinderella's castle, I found Margita Thompson, who works in public relations for Disney. She was nestled next to the table of Merida merchandise at our conference breakfast. Merchandise which actually didn't look like the godforsaken image floating around the Internet that had all of us seeing red. She was ready to answer any questions and was well-aware of all the buzz flying around the Internet. Instead of talking, however, the proof was in the pudding -- she turned my attention to the new merchandise. 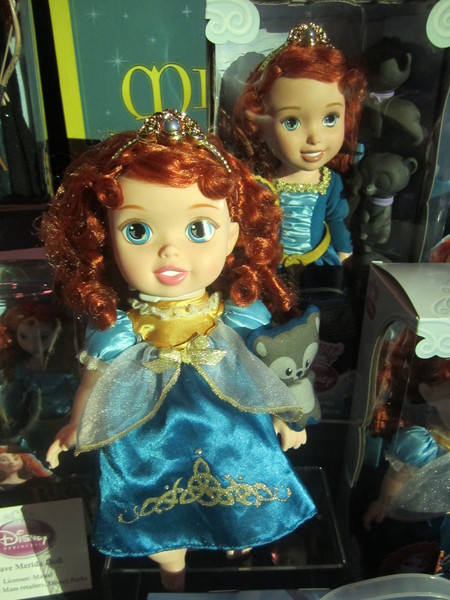 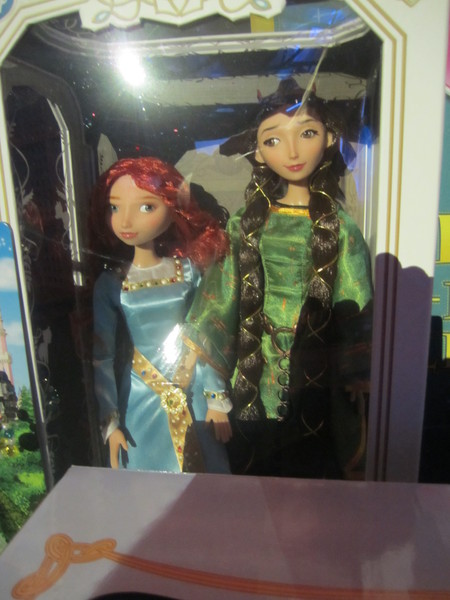 Admittedly, Merida didn't look exactly like she did in the movie, but she also didn't look like a glittery, slutty Barbie. What struck me the most was this: Merida looked different in all the items depending on what you were buying and who you were buying it for. Looking for a Merida doll for a toddler? Then she looks like a baby with a round toddler-like face. Looking for a Merida Barbie- like doll? Then she has more of a Barbie appearance. You can see and judge for yourself -- I took all of the above pictures of the official merchandise at the coronation.

The official Disney statement about the Merida change is as follows: "Merida exemplifies what it means to be a Disney Princess through being brave, passionate and confident, and she remains the same strong and determined Merida from the movie whose inner qualities have inspired moms
and daughters around the world."

But here's what I discovered on Saturday: I discovered the Merida we know, the Merida we love -- at her coronation. There was nothing different about Merida in the official Disney ceremony -- she was MERIDA. Not a prissy, frilly, sparkly Merida. She even walked like Merida -- almost more of a stomp.

Right in front of us was the strong, independent Merida that we fell in love with. She wasn't riding side-saddle in a sparkly dress, cooing at men and giggling, as you'd imagine that adult-like character version of Merida flying around the Internet would. 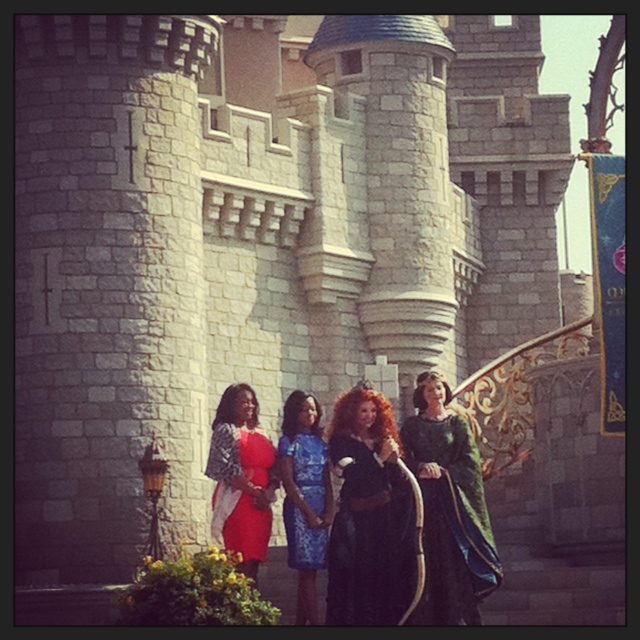 And while I stood a few steps from the stage, I can tell you that it was Olympian Gabby Douglas who kicked off the ceremony. The very young girl who dazzled young girls across the world with her strength and athleticism last summer during the Olympics. Could there have been a better role model for young girls to introduce Merida than Gabby Douglas and her mother? Wasn't this exactly the message we want to send our girls? This was a Disney function -- no one else's -- and it was right on message with the Merida from the movie.

On the stage, with the other 10 official Disney Princesses, Merida proclaimed the following: "I am strong. I am brave. I am Merida. I am a princess."

And lo and behold, I actually captured Merida's proclamation here -- you should definitely watch this part.

Under the blazing heat, with the sun beating down on us before 10 a.m. on Saturday, Merida's coronation felt authentic and my girls were mesmerized. When Queen Elinor took the stage, we all were reminded that not only is Brave about Merida's strength and courage in blazing her own path and changing her fate, but it is about her rebellion and love for her mother. It was a perfect Disney moment on the eve of Mother's Day and I was hooked (and sweating profusely, btw). Were the 11 Princesses sweating? You can trust I was obsessively wondering, because I was a sweaty, red-faced mess and we hadn't even gotten to one ride yet.

The bottom line is this: I can't tell you what to think of the Merida merchandise now. You'll see the merchandise in the stores. I can only tell you that I went into the conference really fired up and left completely inspired. I don't even know if any of these changes are actually happening. Jezebel is reporting Disney has now reversed its decision and I haven't yet heard back from my Disney contact.

Here's what I know: This is what our democracy is all about, which is another valuable lesson for our kids, in my opinion. I am grateful for sites like A Mighty Girl who provide for us a centralized place to find strong role models for our girls, I am grateful for grassroots organizations like Change.org that allow us to sign petitions and collectively send a unified, strong, powerful message to corporations like Disney that we want and need more princesses like Merida and I am grateful to Disney for organizing Merida's official coronation with the spirit and strength of Merida in mind and for showcasing yet another strong, brave girl, Olympian Gabby Douglas.

Merida stood on stage as the strong, brave and independent girl that she is and my girls heard that message and saw that green dress. From my jaded, skeptical viewpoint, it seemed that Disney is listening.

Now, it is up to us what we buy our children and what messages we give them. I'm curious what you think -- has the Merida redesign issue been overblown? Do you agree or disagree?

This piece originally appeared on the Wired Momma blog.

More:
Parentsmerida
Newsletter Sign Up
Raise the kind of person you'd like to know
Subscribe to our parenting newsletter.
Successfully Subscribed!
Realness delivered to your inbox