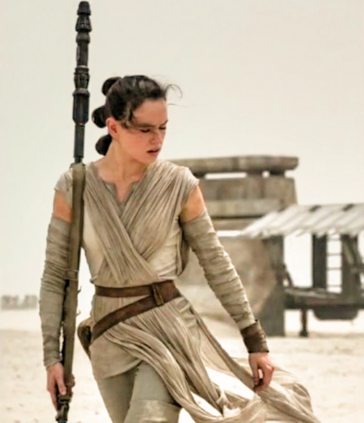 I just watched Stars Wars and I am so proud of Disney for creating the first true Warrior Princess.

From the very beginning of the movie, I love how deliberately Disney shows that Rey does not need any saving. In the opening fight scene, Finn sees a damsel in distress, and his instinctive response is to run over and save her. As soon as he gets close, he sees Rey take out her attackers.

Then in the first explosion, Finn passes out, and Rey shakes him awake. His instinctive reaction is "Are you okay?!" and she looks at him puzzled and says, "yea, are you?" (thinking what a strange question coming from the person laying down when she's alert, standing, and unharmed). Then Finn tries to take her hand and run, and she responds, "Why do you keep trying to grab my hand?" as she explains how difficult it is to run while holding hands.

Star Wars continues to show how strong and clever Rey is when she pilots the Millennium Falcon and takes out Stormtroopers without ever having flown one before. She even knows more about how to fix it than its owner, Han Solo. How exciting to show young girls the happy ending that can come from understanding how things work!

Rey and Finn's roles are also powerful for men. Men often feel immense pressure to be the knight in shining armor, and feel that their masculinity is tied to how well they're able to protect and provide for a woman. A man's ability to win a woman's heart comes from his ability to save her and keep her safe (look at all previous Disney stories).

It is therefore not unusual for men to feel their masculinity threatened (albeit often subconsciously) by a woman who does not need him. So it is no wonder that smart, strong, and successful women do not make a man feel particularly 'manly' according to the traditional, narrowly defined concept of what it means to be a man. The fact that Rey values Finn for his heart, how well-intentioned he is, doing what he believes to be right has huge potential impact on redefining the values that can lead to winning someone's heart.

More subtly, Finn even tries to run away from the fight. Instead of calling him a coward, or asking him to "man up," Rey just asks him to please stay... He explains that he simply cannot go back. She is disappointed but accepts it and they say goodbye and part ways.

The best part comes in the final forest battle scene when Kylo Ren tells Rey, "Let me train you and teach you about the Force" and she replies, "the Force?" and is basically like, I got this, no training necessary. Perhaps it is unrealistic that she needed no training to use the Force or master Jedi mind tricks. And I know it helps Disney sell even more merchandise, rides, etc. by bringing in the other half of the population into its fan base, but I am still psyched. It's great when companies are rewarded (Star Wars crossed $1B global box office breaking the world record) for doing good, for using their powers for good.

Rey's happy ending does not come from being saved by prince charming and living happily ever after together but from discovering the Force within herself, and stepping into her own power. I hope more people and companies choose the light side and follow Disney's lead in using its platform and influence to create positive cultural change.