On Saturday afternoon we visited St. Nicolas Hospital in St. Marc, the current center of the cholera outbreak.

I spoke to a middle-aged man, Robert Raphael, whose family lives between St. Marc and Gonaives. Over the past week he has lost a brother, niece, nephew, and "five or six" cousins to cholera. Five or six -- he'd lost count. 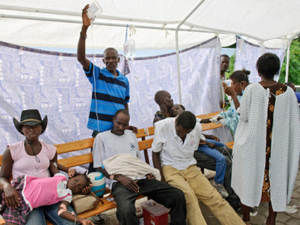 The scene was controlled chaos. People of all ages were spread out in the front courtyard, inside an urgent care building, and in open air alcoves. I'd estimate we saw several hundred people, and there were those we couldn't see inside the hospital, where we weren't allowed. About half of the patients I saw had IVs.

There was loud, incongruously happy-sounding music blaring from a large loudspeaker just outside the front gate. I asked about it and was told it's a just-written Creole song promoting hand washing and teaching that kids are especially vulnerable to cholera.

While we were there, Robert Raphael's aunt who looked in her 70s arrived holding her stomach; I knelt down to talk to her and she was clearly distraught.

I met three wonderful doctors -- three women (two from Spain, one from Italy) who were rushing about treating patients. One told me they are no longer testing for cholera but making the diagnosis clinically (based on symptoms and physical exam) because, "It's an epidemic."

They clearly need more doctors and nurses, but seemed to have enough oral rehydration solution and IV fluids for now. They obviously need specialized supplies like "cholera beds" -- cots with holes cut in them for easier defecation.

I asked an 8-year-old named Ritchie if it was hard to "faire toilette" in public (it's all out in the open), and he looked embarrassed and said, "Yes." That got to me.

Clearly this hospital is max-ed out, but nevertheless making a huge difference. Ritchie and a 10-year-old girl I spoke to no longer needed the IVs they were getting initially. 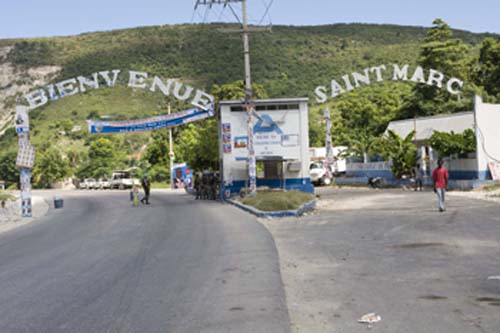 Entrance to the city of St. Mark, the current epicenter of the cholera outbreak.

About 10 people came during the two hours we were there. A few kids were carried in by their parents. One four-year-old boy was able to drink oral rehydration solution as he sat in his father's lap.

But I saw an infant who was so dehydrated he needed an IV. Like any child, he cried in anticipation of the needle stick. But the dead giveaway that he was terribly sick was the absence of any tears -- he was too dry to have any.

So many of the kids were glassy-eyed and sad-looking. A few managed weak smiles. It was all absolutely gut-wrenching.

How much pain and suffering can one country stand?