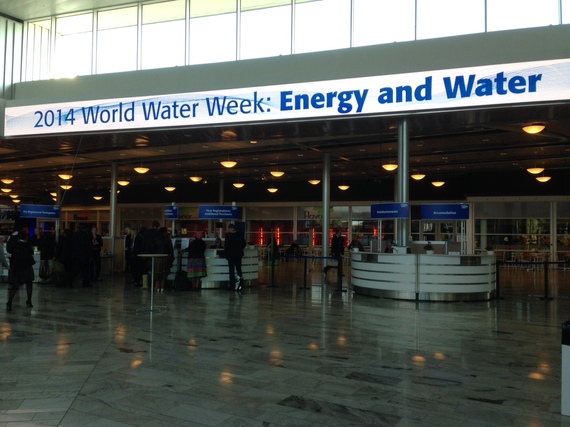 This year, the Pisces Foundation is co-convening a seminar at World Water Week in Stockholm -- perhaps the leading annual global water event. As the conference's organizer Stockholm International Water Institute notes, the meeting brings together "2,500 participants and 200 collaborating organisations from around 130 countries all over the world."

It is possible here to spend ten or twelve hours a day engaged in thinking, hearing, and talking about water--making World Water Week an immersive experience something like TED crossed with the Aspen Ideas Festival for the international water policy set. Our Foundation was excited to have a seminar proposal accepted at this year's conference with our collaborators, including World Wildlife Federation, NRDC, Global Water Challenge, Pacific Institute, US Water Partnership, and CH2MHill.

The theme of this year's program at World Water Week is the "Energy and Water Nexus"--a phrase which refers to the interconnected nature of energy and water. I just completed moderating our seminar on Tuesday, a three and a half hour session that examined this issue in the United States, where the connections between energy and water are fundamental and play a major role in the political economy and environment of the country.

A few examples make these linkages plain. In the U.S., thermoelectric power production is responsible for about forty percent of all water withdrawn from freshwater sources, the largest source of extraction. This water directly or indirectly supports about ninety percent of electricity production. Water isn't just used in the energy sector for cooling, of course, it is used to power turbines in hydroelectric facilities, where seven percent of U.S. electrical generation occurs.

Likewise, the energy consumed moving, treating, heating, and disposing of water is equally substantial. A 2010 study by researchers from the University of Texas found that the U.S. water system used over twelve percent of the nation's energy--more energy than is used for residential or commercial lighting in the U.S. In some states, such as California, where water is moved great distances, the total water footprint of energy is close to 20% of total electricity and 30 percent of non-power plant related natural gas consumption, according to that State's energy commission. For that reason, according to the U.S. E.P.A., in many places in the U.S. letting your faucet run for five minutes uses as much energy as leaving a 60-watt light bulb lit for 22 hours.

Managing energy and water together to maximize the efficient use of both is an example of a broader and important water policy trend: integration. If the 20th century in countries like the U.S. saw the application of technology to make water (and wastewater) cleaner (e.g., the widespread use of "secondary treatment" technology to clean up many rivers and lakes), the 21st century so far reflects not an age of new technology as much as an age of new thinking--an Age of Integration.

The insight that undergirds integrated water management is that the attributes of water -- quality or supply, for example -- are, in fact, closely related and, as a result, are better managed together than apart. The U.S. recently experienced this interconnection when local water authorities in Toledo, Ohio--a city located along the Great Lakes, the largest surface freshwater system in the world--were forced to warn residents not to drink municipal water. As I wrote in an op-ed, this episode provided an acute illustration of how water scarcity practically is closely related to the quality, not just the absolute quantity, of water. Integrated approaches recognize these connections and, as a result, can amplify the results of our investments in managing water. An example: green infrastructure designs that can solve urban water quality challenges and provide many other community enhancements, like parks and other green spaces.

For these reasons, this year's World Water Week theme reflects not only the importance of energy and water (or water and energy, if you like). It is also an important signal about the growing importance of holistic, integrated thinking in meeting our and nature's water needs. The key now is to translate these theoretical insights into policy and practical actions that will make a tangible difference in the world.