On the day before the 70th anniversary of the first atomic bombing, the Hiroshima Peace Memorial Park is crawling with people. Tour groups -- identifiable by matching multicolored lanyards -- rove about the shady walkways, trying to ward off the sweltering heat with paper fans purchased at a nearby convenience store. Against the background of buzzing cicadas, languages blend together in an incomprehensible cacophony -- Japanese, English, German, French, Czech, Chinese. The crane-shaped bell on the Children's Peace Monument tolls in the background like a distant metronome.

In the central plaza, employees of the city are at work erecting tents, connecting sound systems and assembling platforms for the coming day's events. Standing at the podium, the mayor of Hiroshima practices his speech. Were it not for the eerie outline of the A-Bomb dome looming in the background, the landscape of tent poles and disconnected speakers would resemble the set-up for a music festival.

At 8:15 a.m. on August 6, 1945, an American B-29 bomber named the Enola Gay dropped the first atomic bomb on the city of Hiroshima. Almost 80,000 people died within 24 hours of the explosion, and at least another 60,000 would go on to die from bomb-related health problems. Each year, on the anniversary of the bombing, the city invites the world to commemorate those who died and participate in a global call for peace.

"I want people to understand the severity of the bombing and see the need to eliminate nuclear weapons," said Yasuyuki Yakushiji, the Director of the City of Hiroshima's Citizens Activities Promotion Division who is responsible for organizing the annual commemoration.

Yakushiji said the city is expecting well over 50,000 people at tomorrow's event. Ambassadors from over 100 countries -- including Caroline Kennedy, the U.S. Ambassador to Japan -- will be in attendance. The plaza will seat 45,000 people, but city officials say that thousands more will crowd into the ample standing space around the park.

Seven decades after the city was nearly obliterated, Hiroshima has become a popular tourist destination. For the last four consecutive years, the city has registered record-breaking numbers of foreign tourists. Last year, 234,360 non-Japanese tourists visited the Hiroshima Peace Memorial museum -- an increase of over 100,000 from just three years ago.

Hiroshima's tourism appeal is uniquely bonded to its historical destruction. In the decades since the end of World War II, Hiroshima has reshaped its identity around the notion of peace. Visitors can walk through the Peace Memorial Park, visit the Peace Memorial Museum and participate in projects promoting world peace. Representatives from the city have traveled across the world to protest war and encourage nuclear abolition. In a 1985 letter, journalist John Hersey -- whose book about six Hiroshima survivors has been named one of the best pieces of journalism ever written -- commended the city's efforts to keep alive "the bitter yet valuable memory which reminds mankind that nuclear weapons must never be used again." 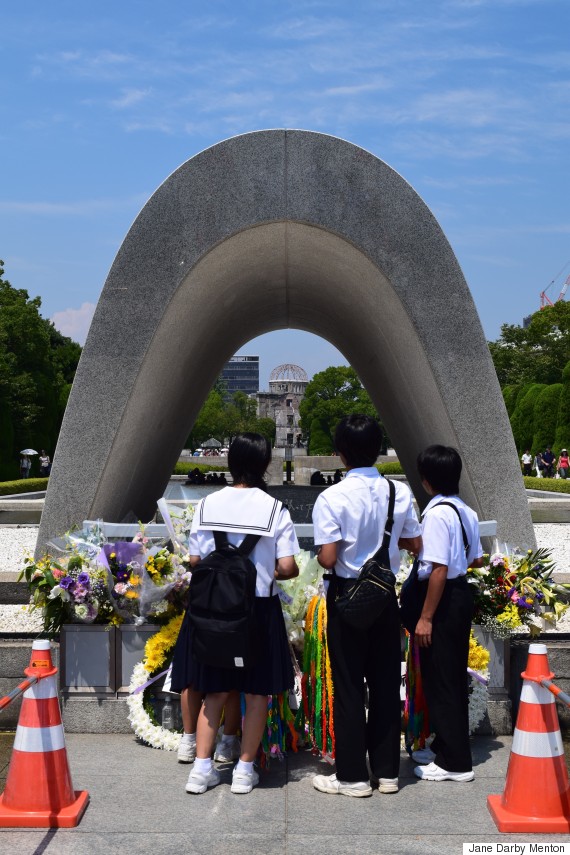 The city promotes its message of peace by linking policy to its human consequences. Traveling to Hiroshima is both an educational and emotional experience. It is not uncommon to see someone break down into tears in the Peace Memorial museum, which illustrates the city's destruction through images, survivor testimony and objects -- such as warped bicycles -- that survived the blast.

"Of course we studied the bomb in school," said Maria Brader, a high school student from Austria who traveled to the city as part of the 2015 World Scout Jamboree, "But in the museum I realized these were real people with feelings and families... I almost cried."

Peter Kuznick, the director of the Nuclear Studies Institute at American University, has brought his students to Hiroshima and Nagasaki for the last two decades in an effort to humanize their study of nuclear policy.

"Hiroshima... it becomes a different experience when you're there and going to the atomic bomb dome and the peace park," he explained. "You feel and see the history all around you. You imagine it happening."

But despite the peace rhetoric, Hiroshima's place in the global conversation about nuclear weapons is not without controversy. Atrocities committed by the Japanese Army such as the Bataan death march -- which killed many American and Filipino prisoners of war -- and the Nanking Massacre, remain vivid memories, especially for Japan's neighbors. Earlier this summer at the U.N. Review Conference on the Nuclear Non-Proliferation Treaty, China and Japan engaged in a heated debate when China vetoed language that would encourage world leaders to visit Hiroshima and Nagasaki.

Actions taken by Japanese government also generate tension when juxtaposed with Hiroshima's peace-centric identity. It took over a decade for the Japanese government to provide any medical or financial assistance to a-bomb survivors -- known as hibakusha -- who were widely persecuted both socially and in the workplace. More recently, facing the threat of a nuclear North Korea, some in the Japanese government have called for Japan to develop a nuclear weapons program of its own, in clear defiance of their commitment to never weaponize their peaceful nuclear.

But city officials and academics argue that Hiroshima's unique experience gives credence to its message of peace, even taking into account other historical and contextual factors. Hiroshima and Nagasaki may not be "perfect victims," but they are the only examples of what nuclear weapons can do.

The bomb that hit Hiroshima left behind few traces of the city that once had been. According to Japanese officials, seventy percent of the buildings were razed to the ground by the explosion and subsequent fires. The thriving Japanese metropolis that exists today emerged from the literal rubble of 1945. Hiroshima is a city of both old and new -- a tragic history and a flourishing present.

"Being in Hiroshima gives you two feeling," said Dan Khalessi, who visited the city last summer. "One is a feeling of sorrow for what happened to these people and to our common humanity, but at other times it gives you a feeling that humanity at its very core is capable of withstanding these things and moving forward and learning from mistakes."

City officials hope that those who travel to the city will leave not just with a better sense of history, but with a desire to apply historical lessons to the future.

Tomorrow morning at 8:15, tens of thousands of people whose ancestors belonged to opposing sides of a great war will stand in silence and look up at the sky. In this moment of solidarity, perhaps there is some small hope for peace.