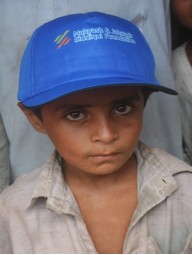 At a camp for flood victims in Rhojan, Pakistan, we meet a man named Humayan who is standing beneath his USAID-issued plastic tarpaulin with 16 family members on a 100-plus degree morning. He tells us he is a tractor driver and earned good money before the floods, but the tractor is now underwater. He and his family only arrived at the camps yesterday -- they had been living at the railway station for three weeks when someone told them about this camp's existence. He says he's happy to be here -- he appreciates the shelter, the water, the food. And he knows they might be there awhile. In the morning, he tells us, he went back to see his home, and swam across the river only to discover it had disappeared entirely. As he speaks, tears fill his eyes. His wife adds that they've had nothing but the clothes on their backs and don't know how they will restart now that both house and tractor have vanished. I look at the family of proud people, this man with the pained expression, his many scruffy-haired children managing to smile shyly, his anxious wife. Could I ever be as patient? Could I sit quietly in a hot tent waiting? Then I notice a little boy named Imran. He is dressed in a tan shalwar kameez. His eyes are piercing, hot and angry. He stands with fists on hips, lips pursed, a tiny pipsqueak who has seen too much sadness and felt too much fear in his young life. I want to hold the child, to make him laugh somehow, to give him joy. I give him my blue cap that Ali had just gifted me. When Ali and his brother-in-law had given their caps, the children squealed with delight. Imran just continues glaring. Ali calls him Imran Khan and we try teasing him -- no response. I look at him again. Maybe this little man is the most honest man here. His anger is raw, and he doesn't hide it. I bet he'd fight if he could, and imagine a rage rising from knowing how little control he has in a world that ignores him. 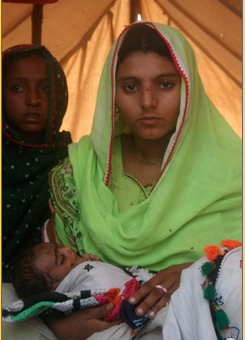 In the late afternoon sun, we visit a camp called Kandhkot in Sindh, organized and run fully by the Mahvesh and Jahangir Siddiqui Foundation. Fields of green sprawl in the distance, but the 100 tents and 820 individuals inhabit a patch of dry dirt. The tents stand one after another, each family sitting together beneath their tarpaulins to avoid the sun's heat, harsh even at this point of the day. It must still be more than 100 degrees and near 100 percent humidity: Rivulets of sweat run down my face, and I arrived at this place in an air-conditioned car. A young woman named Mairani lies with a tiny child on a rope bed beneath a plastic tarpaulin. She gave birth six days prior, but only today did she name her new son Wahid Ali. Her face, framed with a chartreuse scarf, is exhausted, spent, vacant. Flies walk across her face and dance in circles on her arms and legs, but it takes too much energy in the heat to shoo them away -- and does little good. She, her husband and mother had to flee their home, which has since washed away. Their sudden exodus made it impossible to bring any belongings. They both have only the clothes they were wearing three weeks ago. Indeed, she wears the same shalwar kameez in which she gave birth.

Mairani can't talk about her son's future, not yet, not while he is so fragile, not while her world is so fragile. The little boy, tucked under a makeshift canopy held up by a bamboo stick, is sick with fever. Mairani's mother sheds tears as she asks for help, her hands folded in prayer. "Please bring to us mosquito repellent, for the insects are strong here, and we have this infant child." Mairani's husband is somewhere in the camp but his mother-in-law makes clear that he does little for the family. There are thousands like Mairani, which means "lady princess" across the country. She needs the world's help so that she can raise her son and enable him, finally to dare to dream and make his dreams real.

Twenty million Pakistanis were rendered homeless during these floods, which are continuing -- two more towns are expected to be submerged in water tonight. I've met scores of people who stand huddled with their families, and all they have left which is each other. They need food and new houses, clean water and good sanitation, of course. They also need the stuff in life that gives us dignity -- a change of clothes, education for the children, toys so that they can smile and forget for just a moment the sense of hopelessness and despair all around them. My organization is keeping a community site to give up-to-date information on what is happening in Pakistan and where you can help at www.ontheground.pk. Right now, Pakistan needs all of us. 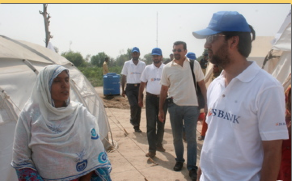 We Can Be Heroes

Across Pakistan, uncommon heroes are arising in response to the worst natural devastation in the country's history. One of them is Ali Siddiqui, head of the JS group, a financial services conglomerate employing 23,000 with stakes in companies in transportation, agriculture, energy and the like. Though only 33 years old, Ali is a man of vision, courage and great spirit. While too many complain that government isn't providing services, he and his family and employees have just gotten on with the business of bringing their skills and resources to do what they can against the odds -- which is ultimately what it takes to bring about change. Ali has mobilized the family's companies owned by the JS Group to set up and run five camps serving more than 10,000 displaced individuals and providing food supplies to more than 20,000. He works with the army, the military, the UN and grassroots NGOs, and in this way, has created strong relationships that have allowed the camps to function relatively smoothly. He spends five days a week in southern Punjab and Sindh, problem-solving, troubleshooting and ensuring the steady flow of what has become a major operation. His family has donated significant financial resources, but what amazes me is how they've mobilized others to enable them to give, having raised nearly $1 million for their relief efforts in the camps. Ali has 15 or 20 of the company's senior people working closely with him on everything from partnerships to logistics to working with the United Nations. Rather than wait for international food rations, his team works through bank offices to identify the best prices at local markets and puts together packages that feed 20,000 people daily. Ali's beautiful wife Saira and brother-in-law (also named Ali) spend considerable time fundraising and giving other types of support. Yesterday, we visited three of the camps with Ali and a small team, meeting military officers and police who provided us security, speaking with camp residents and listening to the stories of children survivors. We were amazed by the efficiency of operations and the strong relationships among different organizations working together. Mostly, we were humbled by Ali's leadership. Indeed, one of his slightly younger employees, Imran, told me that he was in the camps because Ali inspired him daily to give all he can to the world. As David Bowie sings, "We can be heroes." Ali Siddiqui and the JS Group are showing the power of the private sector to move quickly, nimbly and efficiently. He is saving lives and changing perceptions of what role business can play in responding to crisis and in building a country that needs to believe in itself. It starts with leadership, and Pakistan -- and the world -- needs more individuals like Ali Siddiqui to show the way. If you want to donate directly, please give to the Mahvash And Jahangir Siddiqui Foundation, go here.