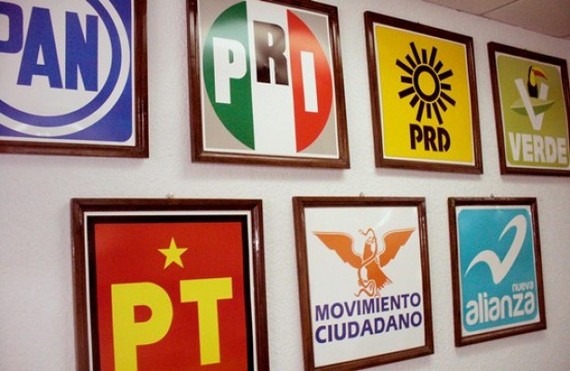 It has been nearly two weeks now since the June 7th mid-term elections, which have set the stage for the next three years in Mexico's political scene. The elections thankfully provided numerous surprises, proving that not everything is set in stone in Mexico's entrenched "partitocracy". Hands down the biggest shock was independent candidate Jaime Rodriguez's landslide victory in Nuevo León, eradicating decades of PRI-PAN rule in Mexico's most important economic hub outside the capital. Most polls predicted a close race between Rodríguez - better known by his nickname "El Bronco" - and the PRI but come election day it was everything but: his 49% share of the vote was the most lopsided margin in any of the nine contested states, and was higher even than the PRI and the PAN candidates put together.

Another shocker was Morena's victory in Mexico City, erasing nearly 20 years of PRD dominance in the capital. Morena outgunned the PRD in total votes and landed 18 of the local legislative assembly's first-past-the-post (FPTP) seats, two more than the PRD. It also snatched 5 out of the capital's 16 boroughs although in this respect it is one short to the PRD's six. No serious pundit probably believed that the PRD would be able to hold on to its bastion for much longer in light of its gradual self-destruction over the past year, but that it happened 3 years sooner than expected was quite a blow to the party that had been the banner of Mexico's left since the late 1980s. With Ricardo Monreal, winner in the borough of Cuauhtémoc, Morena also has a top candidate for replacing the PRD's Miguel Mancera as the next city mayor, a position that is second only to the president in terms of national media visibility.

Less surprising but still worth mentioning was the PAN's awful showing. It was the only party to emerge relatively unscathed from the post-Ayotzinapa political crisis and yet did not find a way to profit from its rival's woes. That PAN leader Gustavo Madero squandered such an opportunity is now weighing heavily on his clout and it is all but certain that his days at the helm are numbered (the party is already gearing up for its upcoming internal elections).

Beyond this, there is the need to dispel some myths about the election.

Myth: The PRI won the elections. If we focus solely on the PRI, the party fared considerably worse during these mid-terms than in 2009: just 29.2% of the vote versus 36.9%. Even when we add the share from its close ally, the PVEM, it still fell short relative to both 2009 and 2012 when they ran together on the same presidential platform. Indeed, the PRI lost a bigger share of the vote in 2015 than any other party including the more maligned PAN, dropping 7.8 percentage points in these last six years. Contrary to the belief that some of this lost ground was compensated by the PVEM, the reality is that the PVEM only won an extra 0.2 percentage points compared to 2009. That's still a woeful 7.5 percentage points less for the PRI-PVEM alliance from 2009, and 2.1 less than in 2012. 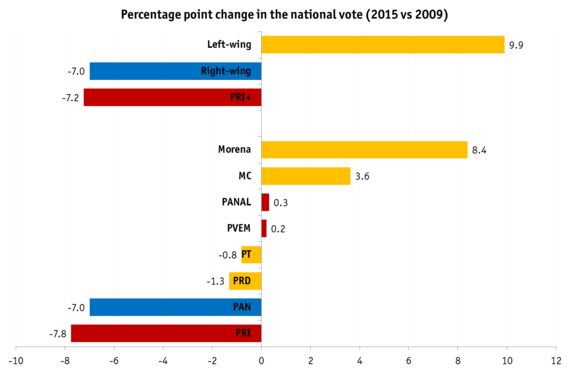 Source: INE; Non-aligned minority parties not included. Morena did not exist in 2009 and is included in left-wing bloc despite not being currently aligned.

The counterargument is that the PRI-PVEM (or PRI-PVEM-PANAL) alliance nevertheless increased its presence in the Chamber of Deputies compared to three years ago. But does this really matter? It still does not have a majority in the Senate where most bills must inevitably pass through and to do so, it needs to combine votes with the PAN as it did successfully in 2013-14 for all but one of the structural reforms (this being the fiscal reform, when it got the PRD to side with it). In retrospect, the success in passing the reform agenda was never due to the fact that the PRI and its allies had a slim majority in the Chamber of Deputies but that it always found a willing ally in both houses to get the necessary 50%+1 or two-thirds required to approve the bills (in the latter case, when these involved constitutional changes). As it is, the only advantage to keeping its simple majority in the Chamber is the ability to pass the budget plus any tweaks to the secondary legislation of already approved reforms. Anything more radical than that and it will need to count on the opposition (expected to be more hostile) for votes.

Then there's the fact that the PRI suffered a net loss of one state in the nine that were up for grabs on June 7th. Yes, it won five of them, but two wins were extremely narrow (San Luis Potosí and Colima, the latter which was by a hair's breadth), while two other wins were in states where the outgoing governments had been plagued with major corruption allegations (Sonora and Guerrero). This should have guaranteed relatively easy wins since neither the PRD nor the PAN had a major presence, respectively, in them. Worse still was the PRI's defeat in the one state where its full political machinery was mobilized to win at all costs: Nuevo León, where it was swept away by El Bronco's electoral tidal wave.

At best therefore, the PRI did not suffer an embarrassment (outside Nuevo León), and benefited from its rivals' inability to capitalize on its scandals. But a "victory"? Hardly.

Myth: The left is out of the game. The share of votes of all leftist parties in Mexico was 28.2%, which is actually higher than in the 2009 or 2003 mid-terms and not significantly down compared to the 2012 presidential race (31.6%). The difference, of course, is that now this share of the votes is spread out more evenly rather than being captured primarily by the PRD. The PRD, of course, had an awful day on June 7th, falling to its lowest share ever (10.9%) and its disastrous outcome in Mexico City is arguably the party's biggest electoral debacle since its founding in 1989. But a lot of its slack was picked up by its ally, Movimiento Ciudadano (read more on this below), and of course Morena which clearly targeted the PRD as its main rival to beat in order to consolidate itself as a major leftist force.

The question of the whether the left can present a united front in 2018 is up in the air and will largely depend on which of the two parties approaches 2018 with greater momentum. Expect Morena's leader and perennial contender, Andrés Manuel López Obrador, to mount a third bid for the presidency regardless; it is inconceivable to see him caving in to the PRD even if the latter were to somehow show greater potential. This would practically seal another defeat for the left as without Morena support, the PRD will be hard pressed to win on its own. But the story could be different if Morena ends up arriving as the stronger of the two, and convinces the PRD to join an AMLO-led leftist coalition. The left has typically fared poorly in mid-terms but has more than made up for it during the presidential elections. If it gains a similar boost in 2018 as occurred in 2012 or 2006 (in both cases about 12-13 percentage points higher than in the preceding med-terms), we could in theory have 40% of the vote going to the left. That, in Mexico, is enough to win you the presidency. 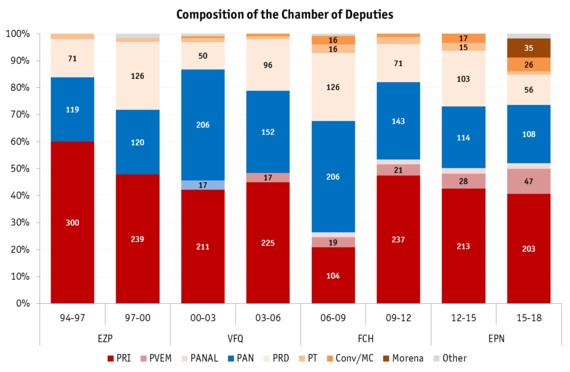 Source: INE; PVEM shaded in light blue in 00-03 since it was a PAN ally during the 2000 election; all data correspond to the start of the legislative term; data for 15-18 still not definitive. 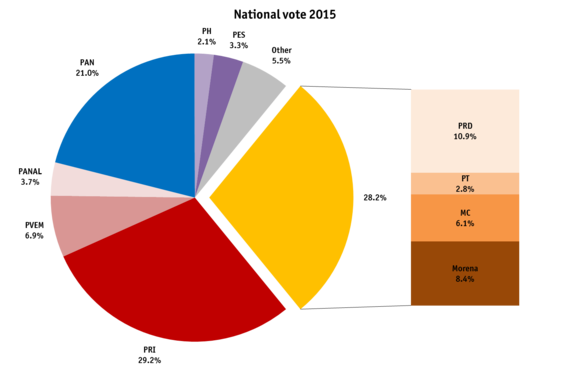 Source: INE (district counts); the Partido Humanista (PH) and the Partido del Trabajo (PT) and in the process of losing their party registry as a result of failing to meet the 3% minimum threshold.

Myth: Minority parties need to cheat to win. News in the weeks before the election had been dominated by the PVEM's streak of campaign rules violations (mainly vote buying and illegal advertisements) that began even before the campaign took off officially in April. Over the course of the year, the PRI's ally accumulated millions of pesos in fines and yet none of this deterred the party from continued defiance; if anything, the was the main victim of the PVEM's rule breaking, as it significantly eroded the credibility of the new electoral institute barely a year after its creation. But the argument that minority parties inevitably need to step beyond the bounds of legality to make an impact appears difficult to sustain in light of the less publicized success of Movimiento Ciudadano (MC), the leftist minority party that actually had a bigger boost in the polls than the PVEM despite mostly playing by the rules.

The numbers say it all. The MC gained 3.6 additional percentage points of the national vote compared to the last mid-terms, against just 0.2 extra for the PVEM. It also gained 53% more seats in the Chamber of Deputies (17 to 26) compared to 2012, whereas the PVEM gained 38% (34 to 47) if the legislators that switched to the PRI shortly after the 2012 election are included. Its total tally of 26 seats is now nearly half of the PRD's, and just 9 shy of Morena's, while in the national vote it actually beat out the PRD in 7 states and Morena in 5. In the state of Jalisco, it beat everyone. Watch out if the MC decides to switch allegiances and become Morena's partner for 2018 as it has already hinted at. That would put even more pressure on the PRD to accept Morena's leadership of the left in the next elections.

One has to give it to the PVEM; its gamble to break the rules from day one paid off handsomely in the face of an ineffective INE. But the MC proved that you can do as well without such blatant disregard to the law. Why this isn't the great moral lesson of the mid-terms is regrettable.

Myth: The null vote made a difference. It seems like every recent election in Mexico triggers a public campaign in favor of nullifying the vote as a form of anti-establishment protest. At no time in recent memory has the Mexican political class been subject such levels of rejection as today and yet in spite of this, these elections prompted the highest turnout of any mid-terms in the democratic era (47%). It appears that for the most part, Mexicans do believe that political parties can be punished at the polls, and the availability of independent candidates certainly gave many voters an attractive alternative as evidenced by Nuevo León, where the turnout was nearly 60% and for the fact that five of the nine states that voted for a new governor chose the opposition (we can certainly also add the PRD's shellacking in the capital to this mix). The argument in favor of the null vote was given passionately by more than one well-known political pundit but for all intents and purposes - and aside from some rather creative nullifications shared on social media - it had zero impact on the outcome.