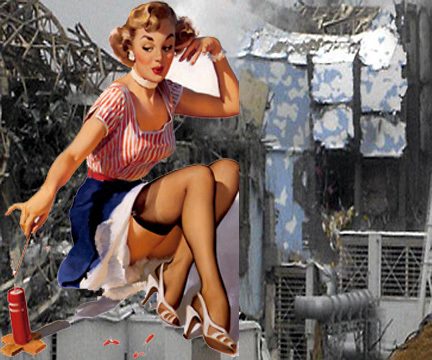 Each year writers, critics and scholars of "born digital" literature congregate at the Electronic Literature Organization conference. The latest, hosted in June by the University of Wisconsin, Milwaukee, featured a juried, interactive show of works by an international array of both well-known writers (Judy Malloy, Steve Tomasula, Stephanie Strickland and Judd Morrissey) as well as newcomers as part of a "first encounters" online gallery.

As Kathi Inman Berens notes in her curatorial statement, this show embodies a current trend in e-lit away from self-confined browser-based work. Instead, many of the pieces cross into the material world by employing the user or author's own body, combining digital with physical texts or objects, or by intersecting with "real world" systems.

Christian Ulrik Andersen, Jonas Fritsch and Soren Bro Pold's, delightful "Ink After Print" illustrates all three kinds of material intersection. Installed previously in public libraries, the piece asks writer/readers to "navigate" an onscreen "page" using one of three wooden "books", each of which is connected to a database of writings by Danish poet Pete-Clement Woetmann. By rotating, lifting or lowering the book object, users capture phrases on the screen. The resultant poem can printed out on a little piece of paper resembling a library book slip for the patron to take home or share with others. 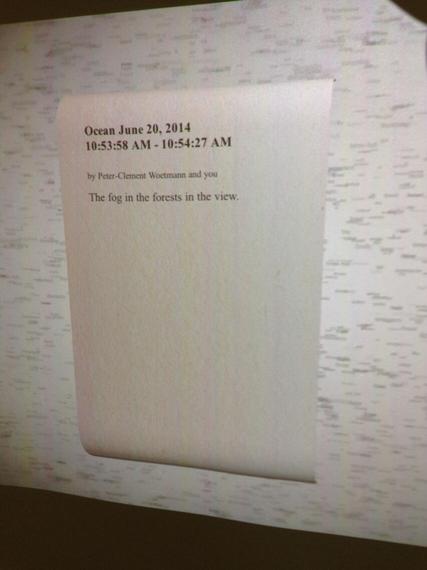 Screenshot of "Ink After Print"

In Abraham Avnisan's kinetic poem, "Collocations", depending on how a user moves an iPad in space, different words within physicist Neils Bohr's essay on complementarity (the way an observing instrument in part determines what is observed) become highlighted. Avnisan's process is a digitally mediated act of intimacy, whereby the user's movements reveal human(e) "sub-texts" which are not computer generated, but chosen purposefully by the author. 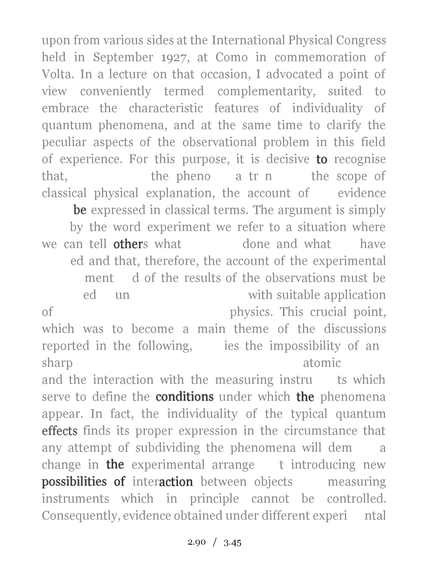 Several works employ physical movements of the author or dancer to create works. These include Catherine Siller's, transcendent "Not Not 0.1", which documents her dance duet with semi-transparent images of herself and text, and Eric Suzanne's awkward wrangling with an overhead projector and solo dance in his performance of "The Obsolete Book in a Post-Obsolete World as Represented by a Post-Obsolete Book About Dance".

Virtual reality is the newest and most comprehensive technology to harness the body for storytelling. Anastasia Salter and John Murray's "View from Within," creates an "infinite" canvas wherein panels of Salter's hand-drawn comic, which visualizes various perspectives of a single moment, December 21st, the date prophesied by the Mayan calendar as the end of the world, are transformed into 3-D spaces. Caitlin Fisher also utilizes a moment of crisis and extends it. In "Cardomom of the Dead", virtual space is transformed into a surreal landscape littered with memories. Although neither work demonstrates what Ian Bogost calls "procedural rhetoric," that is neither directly questions the relationship of material and virtual worlds and bodies in VR, both provide ample evidence of the potential of the medium. 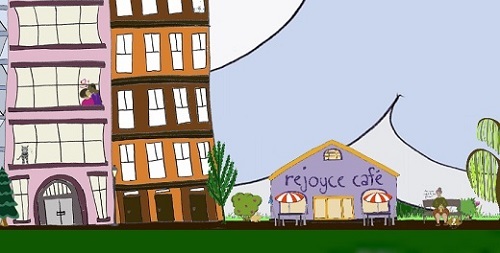 Cartoon from "View From Within"

Rather than specifically harness the reader's body, several works in the show focus on the materiality of the book and text itself. One standout is Amaranth Borsuk, Kate Durbin and Ian Hatcher's exquisite interactive poetry book "Abra" that utilizes special heat-sensitive inks (blow and words temporarily disappear), letterpress text, and "burned" and widening die-cut apertures. The book ends with the glossy surface an iPad that invokes water at the bottom of a well upon which words float by. 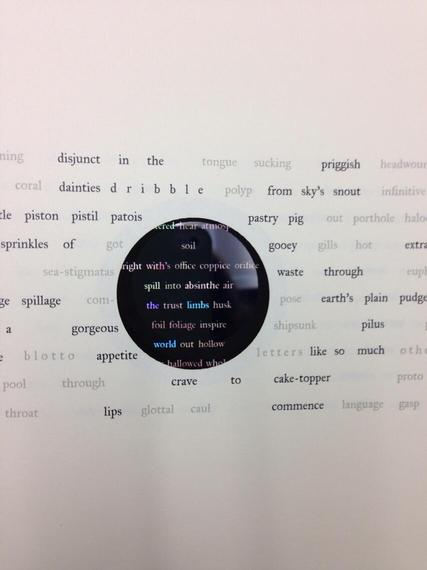 
Other noteworthy examples include Jeff T. Johnson and Andrew Klobucar's "Letters from the Archiverse" that uses the popular architectural modeling software AutoCAD to create 3-D poems, and Nick Montfort's algorithmic poem "Round", directly addresses both the materiality of the digital. Here, the computer calculates digits of Pi in real-time and replaces them with one of 9 words or a line break, thus creating an endless and ever-slowing poetic engine in which increasing time and energy is required to perform the operations. 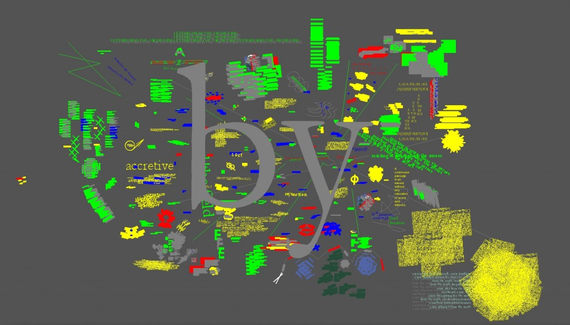 Screenshot "Letters from the Archiverse"

"La Separation/Separation" by Pierre Fourny (ALIS Company), Serge Bouchardon and Luc Dall'Armellina (i-Trace Collective) is a charming extended magic trick of a poem that exists both in a Kinect version and tablet version. In the installation I saw, participants choose a folded paper card upon which a word is typed. Through a simple onscreen manipulation, the initial word is halved and one half is removed and another complementary half is added. Thus, for instance, "separation" becomes "perception". Users continue the iteration, creating a kind of poem that plays with the materiality of letters as shapes and meaning through playful juxtaposition.

Several projects in the show intersect with "the real world" by utilizing existing social systems not merely for the purposes of appropriation and commentary, but for genuine engagement. Ben Grosser's courageously subversive Scaremail allows subscribers to have pieces of altered text from Ray Bradbury's sci-fi novel about censorship Fahrenheit 451 added to the bottom of their Gmails. Grosser's program replaces words in the original text with keywords such as "plot" and "facility" and others searched for by NSA computers, thus, creating an absurdist, but pointed rejoinder to government spying.

ScareMail from benjamin grosser on Vimeo.

Equally intriguing is the collaboration between Carolyn Guertin and Katherine Jin. Currently in development, and soon bound for Kickstarter, "Wandering Mei Mei" is "a bilingual interactive fiction app designed primarily for the huge cadre of migrant female workers in China who have left their homes to work in factories. Inspired by the traditional Chinese comic strip, Sanmao Liu Lang Ji (Wandering Sanmao), the female Meimei character, who works in a smart-phone factory, acts as a stand-in for these workers. Using the app, these young women can interact with MeiMei including sending and receiving SMS messages from her, solve puzzles, including QR encoded clues, and can post their own stories at the website. 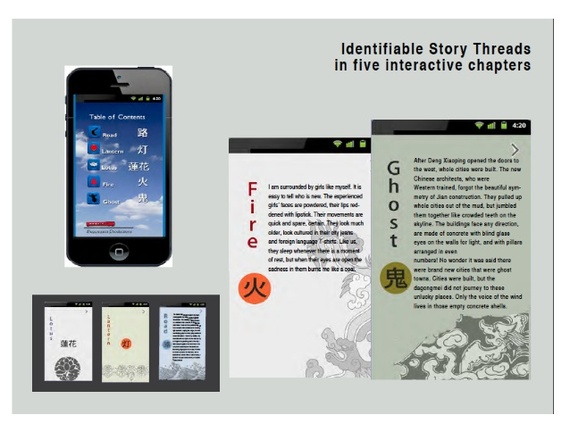 Inman Berens ends her curatorial statement by emphasizing the paradoxically ephemeral nature of digital literature. Here, she is not only referring to a work's potential obsolescence as devices, coding languages, and interfaces change, but also to the nature of the digital medium itself which is ever read and made anew each time it is called up. Moreover, although we now have the ability to easily store and retrieve information, the pace of information generation is such that our human brains cannot process let alone remember what happened even a few days ago. Thus, the changeability inherent in materiality and an abstract eternal now converge in the digital realm. It is not surprising then that several works in the show directly address the passage of time and the relation of the digital to history and obsolescence.

M.D. Coverley's "Fukushima Pin-Up" acts as a hybrid time-keeping object. Here, different forms of time are combined in the form of a printable calendar that features chimerical images of the recent Fukushima nuclear disaster that have been "prettied up" by the inclusion of World War 2 era pin-up girls thus linking two eras of history. The calendar features daily reminders of already forgotten news headlines about the disaster, the "obsolescence" of these contrasting with the unavoidable longevity of radioactivity.

Dana Coester and Joel Beeson's, "War Poems" began with the serendipitous encounter with a rare book of poetry written by two young black women, Ada and Ethel Peters, while students at the West Virginia Negro Collegiate Institute in 1919. The book both celebrates of the bravery and patriotism of African-American soldiers, and decries their treatment, calling for increased civil rights. The project serves as an interactive digital history centered around these recovered and, now, digitally conserved voices.

While she does not speculate on the causal link between the two, by emphasizing both the shift toward materiality in and the inherent ephemerality of born-digital works, in "Disperse the Light," Inman Behrens demonstrates electronic literature's unique potential to creatively explore and interrogate the critically important relationship between our analog and digital existences.

JOIN ME for two free talks on E-lit:
In Philadelphia on November 12th, I'll be speaking as part of Temple University Tyler School of Art Critical Dialogues Series.
In New York City on December 4th, I'll be part of a two-day symposium on immersive and innovative storytelling at the New School.