"If you were to ask me where I'm from, I would say I'm from Internet," says Sudanese political cartoonist Khalid Albaih. "Identity is a deep question - with no single answer. It's really hard to be a 30-year old living with an identity crisis. I'm African yet I'm Arab and Muslim. Living in Sudan I lived under a government where Arabs and Muslims ruled - yet most of Sudan is not Arab or Muslim. I've lived as an oppressor and as an oppressed."

As I decipher my interview notes with Khalid, death tolls from the attacks in Nice, France keep rising, and Turkey lives through a coup replaying scenes from so many other coup d'état throughout the Middle East in recent memory. 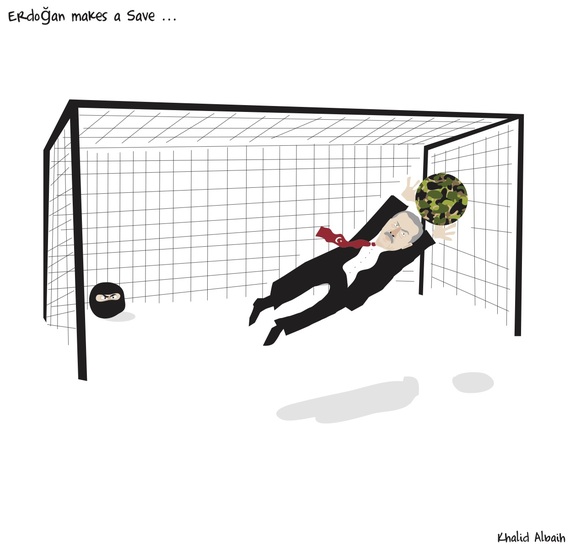 What's even more striking is the parallel's of the most recent news reflected in Khalid's witty, thought provoking, stark political cartoons ranging from 2016 U.S. presidential elections, to race relations in America, to injustice in Sudan and throughout the Arab world. 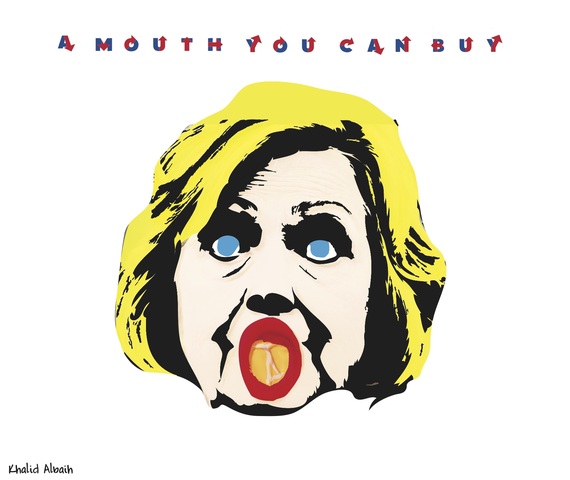 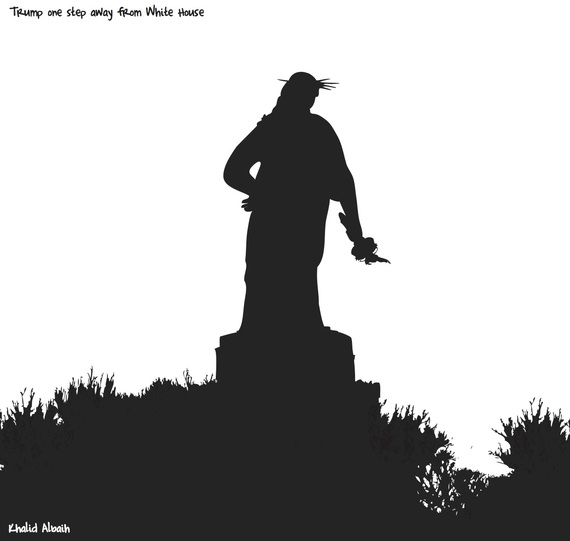 Born in Romania to a family of Sudanese diplomat and social justice activist, Khalid Albaih grew up in Sudan but has lived in exile in Doha, Qatar for the last 27 years. Politics have been front and center in Khalid's daily life where oppression and oppressive government actions have been impossible to ignore. That's the very reason, Khalid believes, "revolutions happen in the Arab world and online." 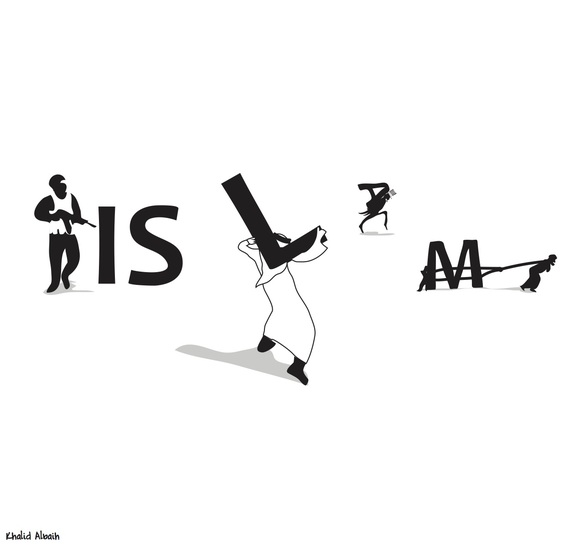 The "generational identity problem" Khalid says is eased in Qatar where the population constitutes different nationalities and religions living in relative harmony. His fluency in various Arabic dialects allows him to weave through Egyptian, Lebanese, Sudanese and many other Arab communities with ease - sharing a common denominator.

"We're all in Qatar living in exile because we can't get simple rights in our own countries - and here everyone lives safety away from politics.. "

Trained as an interior architect and engineer, Khalid's first love was always art. But in the Arab world, studying art or aiming for an art degree is not a conventional career choice as say engineering.

A fatigued Khalid professes that since the start of the "Arab Spring" uprisings in 2011 he hasn't had a good night's sleep. In fact, the uprisings brought his cartoons to the streets of Cairo (Egypt) and Sana'a (Yemen) as his work was stenciled and reproduced on city walls.

Working during the day as head of installations and design for public art in Qatar Museums Authority, Khalid spends his evenings and nights drawing, and on the Internet connecting and engaging with other artists in the Arab world and the world, and with thousands of his Facebook followers on "Khartoon!" a smart word play on "cartoon" and the capital city of Sudan, Khartoum, where he lived. 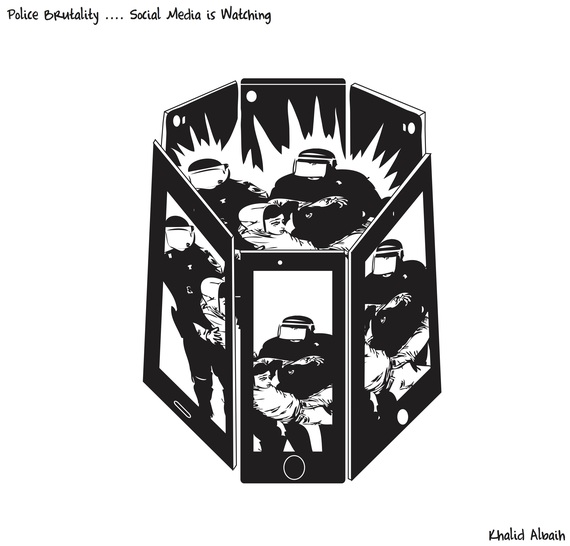 A prolific cartoonist, Khalid's works have been exhibited throughout Europe, U.S., Canada and the Middle East. He's often invited to speak, exhibit, and has been awarded residencies as with the Oak Institute for the Study of International Human Rights at Colby College where he's been selected as the 2016 Human Rights Fellow.

It all started at Childhood

Khalid's love and intrigue with cartoons started in childhood reading translated DC and Marvel comic books with white superheroes saving the day - a figurative symbolism absent in his Arab world. Moving to Doha exposed the young Khalid to the world of political cartoons like those in Sabah Al kheir magazine his father read. For the first time, Khalid was exposed to sharp criticisms and opinions expressed visually - and reaching across borders and ideology - and making an immediate impact.

Khalid's journey as a political cartoonist embarked when he was a 21 year-old university student at Ajman University of Science and Technology, where he received his B.A. in interior design engineering. Khalid drew a series of cartoons reflective of the candidates in the student elections - they were a hit, the students identified with his quick, witty visual statements.

By the time he was 24 and searching for a job, working as a cartoonist was not an option. But turmoil in Sudan inspired him to write his thoughts. But his dyslexia made it challenging for him to freely express thoughts in written words.

The "Internet" became his savior, the equalizer empowering artists like him, and the rest of in the Arab world, to freely express and interact in real-time. 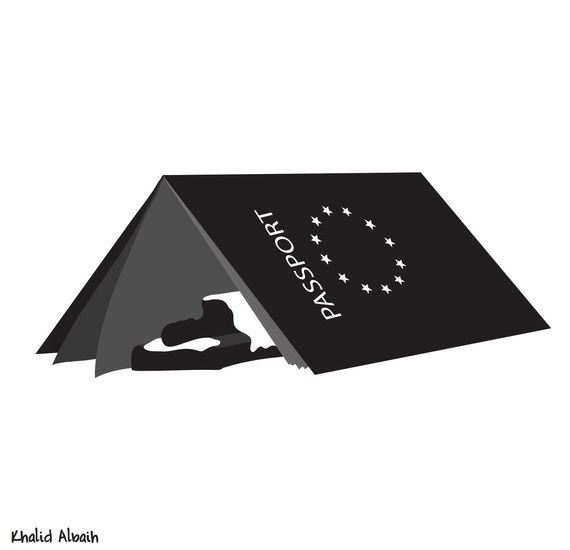 "Arabs have a hard time getting their rights," Khalid states, "So it's inevitable that the powers that oppress will someday be the oppressed."

By 2008, Khalid started actively applying for newspaper jobs as a cartoonist. Most editors rejected his work, unable to find it humorous and worried that his work would put their publication at risk.

That's when Khalid adopted a new homeland - the Internet.

"The Internet and social media became my first platform to publish without being associated with a publisher or an editor."

And it was the Internet that opened a new means for Khalid to connect with young and talented artists throughout the Arab world and around the world - especially at the dawn of the "Arab Spring" where the Arab world exploded with expressions of grievance, distraught, demanding justice and freedom of expression. The Internet became the best platform to express, engage, and interact across borders and exchange ideas and opinions without the fear factor. It helped open the threshold to pass through the fears set by oppressive governments to hinder free expressions. 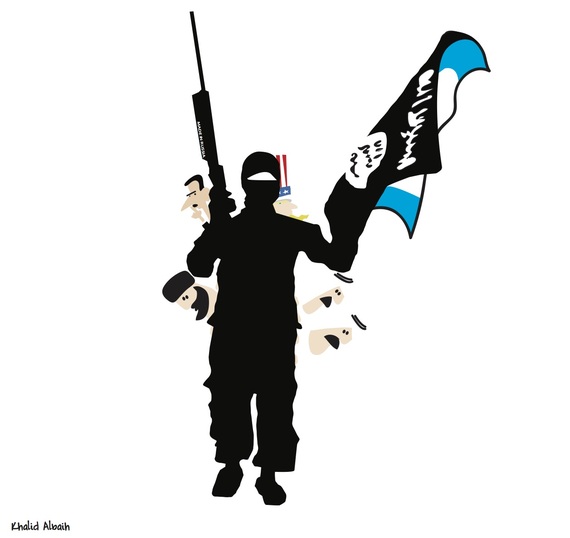 "The Arab world where graffiti was never allowed, was suddenly seeing walls covered with political thoughts by some very talented artists who were adopting the walls as their canvas, breaking through the barriers of fear and feeling free for the first time. It was a truly incredible ride of ups and downs. It was the time to not lose hope - the time to channel pain."

Khalid rode that thrilling ride - finding a massive audience on the Internet hungry for his thoughts and his political cartoons, which posed questions - incited conversations in a public space where his audience interacted and was always willing to discuss, ponder, listen and learn.

While in the west, Khalid says, citizens were naïve (until the Snowden revelations) about the privacy factor of the social media, in the Arab world it was a given that common citizens "were spied upon and watched and that Facebook and Google provided private information to the governments."

"We know that we are under surveillance at all times - and that anything we say online can kill you."

While he is cautious and "smart" about what he posts, he emphasizes:

"We feel very empowered - because we know that all governments are scared of what we have to say - and what we draw."

Khalid is well aware that his political cartoons are making an impact, and distressing government officials across the Middle East.

"My cartoons are my new weapons to talk back to those who are trying to silence us."

In 2014, when Khalid was invited to be part of an arts residency in Egypt, he was arrested upon arrival to Egypt and interrogated for hours. One of the frequently asked questions by his interrogators was whether he was going draw a cartoon about his interrogation. When he applied for a U.S. visa he waited for seven months for approval and upon entry into the U.S. was held and interrogated for two hours. He did manage to participate, however, as part of the culturunners program - an independent arts organization, which supports "artists' journeys and production across physical and ideological borders and collaborates with traveling artists to share stories and create art across contested borders." Khalid joined other artists from the Middle East, traveling in a fitted RV across America sharing his thoughts on human rights violations, race issues, discrimination and oppression. Issues Khalid has lived through all his life.

"Art is about disturbing the comfortable. Cartoons are the best way to accomplish this because you don't have to be a professor, an intellectual, or attend a museum to understand the meaning of a cartoon."

While the Internet has given Khalid unimagined freedom, he is aware of its consequences as well. As a father of two toddlers he respects his wife's advice as his editor and censor - ensuring that his cartoons ignite conversation not insult.

Ultimately, Khalid's cartoons ask a question - forcing the viewer to think about the issue at hand, opening doors to further discussions and other perspectives. He considers Cartooning as his "calling" and mission - and a way to ensure that his children grow up living at home, not as refugees, and be treated as human beings, in a normal world.

"Our generation is tasked with the mission to solve this world's problems. The world has become a village - getting smaller - and hatred in a small place makes for a disaster. We must come to terms with the fact that we share as much similarities as differences."

Khalid hopes to someday return to Sudan where he can flourish as an artist and help bring a different perspective to his homeland based on his vast experiences and travels. With his father already back in Sudan and teaching at a university, he feels that the country is slowly opening up to a "breath of fresh air."

And it is in Sudan where he is building the steppingstones to a future he hopes to have, by building an actual center for his online community - Khartoum Contemporary Art Centre, involving western artists to share their works and thoughts with Sudanese and other artists from around the world. But he admits it's a long journey, and "hard work to get the world's attention with your art. We need a lot of funding to make this a reality."

Khalid Albaih's love for his homeland is undeniable - his eyes glitter as he talks about his future plans of returning to his homeland.

"Did you know that Sudan has the most pyramids than any other country?"

No, I admit I didn't know that. And delighted to have learned something about Sudan other than details of war and brutalities.

See more cartoons and a video interview with Khalid Albaih on Artists at War conducted by Jackie Abramian.